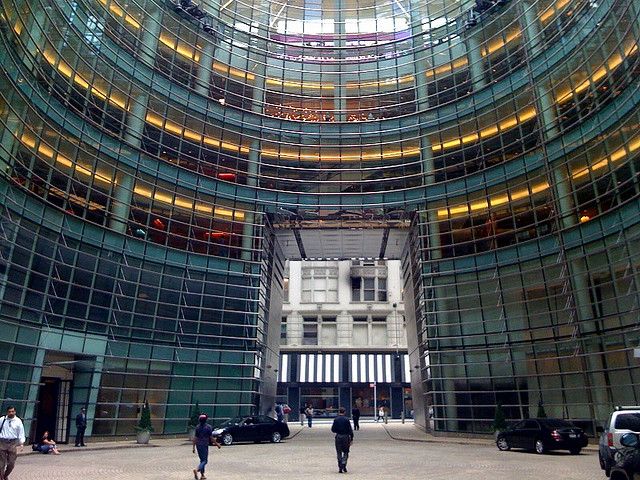 Choire Sicha’s new book, Very Recent History: An Entirely Factual Account of a Year (c. AD 2009) in a Large City, documents only a slim moment in New York history, but it does so from an interesting perspective: It reads like a novel, but it’s actually a reported story about a real group of friends that Sicha, currently co-editor of The Awl, knows personally. (Despite the subtitle, there’s debate as to just how much of Very Recent History is fact versus fabrication, an issue Michael H. Miller touched upon in his review for the New York Observer.)

The book also functions as an essay about New York in maybe the worst year of the recession. So while the focus remains mostly on people, Sicha intersperses it with facts about what life was like in a specific city, at a specific moment. Oh, and the narration reads as if he’s writing an anthropological account for readers in the very distant future, who can’t imagine what things in 2009 were like at all.

But as Sicha tells us below, Very Recent History is also written for those who lived through it and are already forgetting.

Next City: You said before we got started that folks think of your book as a novel or a thinly veiled memoir.

Choire Sicha: I think they don’t care to stop to think about what it is while they are reading it. Which is good, that’s a good thing. Some people assume that it’s a thinly veiled memoir, or made up, or fictionalized in some way. It’s totally just reporting.

NC: I feel confident saying you’ve written the only book this year — maybe this decade — that explains what reinsurance is in the very first chapter. How hard was it to organize this book as a sort of explanation to the future?

Sicha: It was hard. My idea was there would be some things we would remember. And there would be some things that won’t have mattered at all. Weirdly we don’t talk about 9/11 in the book, which is a strange omission. We do talk about a long time ago when a big chunk of Wall Street burned down and it was a massive boon to the neighborhood and no one could pay for it because all the insurance companies burned down, too.

NC: Why put a group of friends alongside the worst year for the city’s economy that anyone can remember?

Sicha: What we wanted to do was look at the emotional and psychic stresses of cities, recessions, employment. How macro structures impact your very personal life. Which I think was really true about the last recession. It was true for me. That stuff stressed me out in dark ways.

NC: What do you remember as dark?

Sicha: It was so unexpected. Everyone getting fired all at once. The kind of pervasive, endless doom and gloom. The sort of constant uncertainty coupled with periods of shock. It was fairly terrible for a lot of working people. I was freelancing and working at a magazine. I got laid off at the magazine. The freelancing just evaporated, and was replaced with nothing. Then with much less well-paid freelancing.

It was a shock to the system. A reorganization. Some things just disappeared. Others were replaced with better systems. 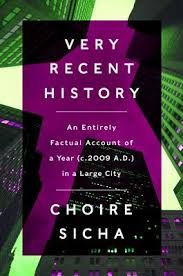 NC: There’s a lot of talk of debt throughout the book. If you’ve ever had any significant debt, it really plays on ones anxiety. A lot of the book is about just how expensive it is to live in New York. Do you think it’s becoming a place where the young and creative can’t make it anymore? Is this just a town for bankers now? And what’s that mean for the city?

Sicha: A good number — no one really knows how many — a good chunk of young people here are subsidized to live here. Which would never have happened in the past because their parents wouldn’t have let them come to New York, much less have been in a position to pay for it.

NYC has always been a city of privilege. This is a place where we live in apartments that used to have maid’s quarters. That cute den is where some Irish Lady lived, who made your meals. If you don’t go to Berlin or Detroit or New Orleans, you have to really pony up to come here. I know some kids who have come here and done it, but a lot of them are drug dealers. When I moved here we did anything to make money. I guess that’s still true, but you just have to make more.

NC: Your book castigates the wealthy throughout, particularly in the form of Mayor Bloomberg, yet it ends in a sort of joyful bubble of wealth.

Sicha: It’s actually a good point. I do know what you mean. Money isn’t security, but just enough of it to take care of your basics provides this sense of well being. That kind of radically transforms how you feel inside. It’s not a very radical proposition in the end…

I have really complicated feelings about money. I know a lot of rich people. A lot of very rich people I know feel very poor in New York. I know people who have made approaching a million dollars per year — which is a lot of money — and they don’t feel rich here. And maybe they aren’t rich here? Which is kind of hilarious for the rest of us.

NC: Bloomberg Tower is a building you return to again and again. What did it represent for you?

Sicha: I would actually like to talk about a lot more buildings. I would love to talk about the New York Times creating a headquarters and then immediately pivoting and selling it back because they couldn’t afford it. Whereas Bloomberg could afford it.

Bloomberg’s is a pretty fantastic building. Sort of Death Starry. With the fish tanks. The open plan office. It’s a discreet building in the middle of everything, in the middle of the big shopping district. But it’s completely obscured. Its facade is completely uniform. It’s a building that sort of disappears. Yet everyone is in it.

It’s done very well since then. As has all property. Which is another consequence of the recession — because interest rates have been negligible, everyone has bought everything available. In all five boroughs. There’s not a brownstone for sale in South Brooklyn.

NC: I read this story about a couple of buildings in the Village that were these insane squats and are now condos. I guess the way I took that is: New York has always been hard. The way it used to be hard was scary. You had to risk your life because it was dangerous here. But now it’s hard because it’s expensive.

Sicha: Right, but we were willing to put up with violence as opposed to having to come up with a bunch of money. I try not to get nostalgic, because nostalgia is false. In a way, maybe it’s okay that New York City is for the rich. What do they say now, that there are 400,000 millionaires in NYC? That’s one of the things that [mayoral candidate Bill] de Blasio is putting out there this week. Which is a hilarious figure. Entirely possible. It is also really really amusing.

What’s great about New York is these are people we know, too. The issue of space in NYC has always been a kind of diversity. That diversity is changing over time. Where do you live now? You just got here, right?

Sicha: Right. I was at a reading last night and a friend of mine was like, “I just moved.” And I asked where and she said, “Crown Heights.” And I was like, “You and everyone else.”

NC: Do you live in Manhattan?

Sicha: I just moved to Brooklyn a year ago for the first time. I am very ambivalent about it. I feel like I retired too soon. My husband is desperate to be in Manhattan and I’m like why, and he says’ “I want to be in the middle of it all.” We’ll be walking down the street in Manhattan and hear a car crash and sirens screaming and I’ll say, “Is this what you’re craving?” and he says, “Yeah, kinda.”

We live in like the last brownstone before the Gowanus starts. It’s kind of on the border. It’s a great spot. My neighbors have lived there since high school. They are in their 80s. They are maybe the last people who haven’t sold. It’s a very strange position for all these people in Carroll Gardens, who bought townhouses for $75,000 but [are] getting $2 million for these pretty run-down places. But the big question for them is, where do you go? To be sitting on a thing that’s worth so much money, but then, what happens to your life?

Carroll Gardens is great because it has introduced racial diversity to a place that was an incredibly all-white neighborhood. But it’s ethnic diversity without actual diversity, of income or status.

NC: Is that where you are living? Carroll Gardens?

Sicha: I like to call where I live Gowanus Gardens. It’s intense. It’s a little unpleasant. It’s extremely hard to develop in Brooklyn… they are doing as much as they can handle. The subway alone, NYC’s rotting, overflowing wastewater system. It’s feeling very full in South Brooklyn. They are really going to build the Gowanus.

Which is kind of amazing in the wake of what we saw with the hurricane. I looked down my street and cars were covered in water. That’s exactly where they are going to build like 700-unit buildings. With climate change, I’m very doom and gloom on the city. New York is going to be underwater. My husband, a real estate guy, says NYC is going to be fine. He says they are just going to use the second floors.

Brooklyn is getting Manhattanized. The whole idealistic artisanal twee thing is pretty out of control. You probably even see it in Crown Heights. We don’t have a lot of things that are necessary, but we have a lot of things that are nice to have. But Brooklyn can’t Manhattanize, because we can still park on the street. That being said, I lived in the East Village for 18 years, and I parked on St. Marks Place. It was a hustle but I did it.

NC: What are some other developments in NYC that you’d like to have covered?

Sicha: I honestly would like to write a whole book on zoning, which probably no one would ever read. I really want to write about the Williamsburg waterfront, which, at the time of my book, was completely stalled. A good chunk of projects on the waterfront were at a standstill and are now astoundingly complete.