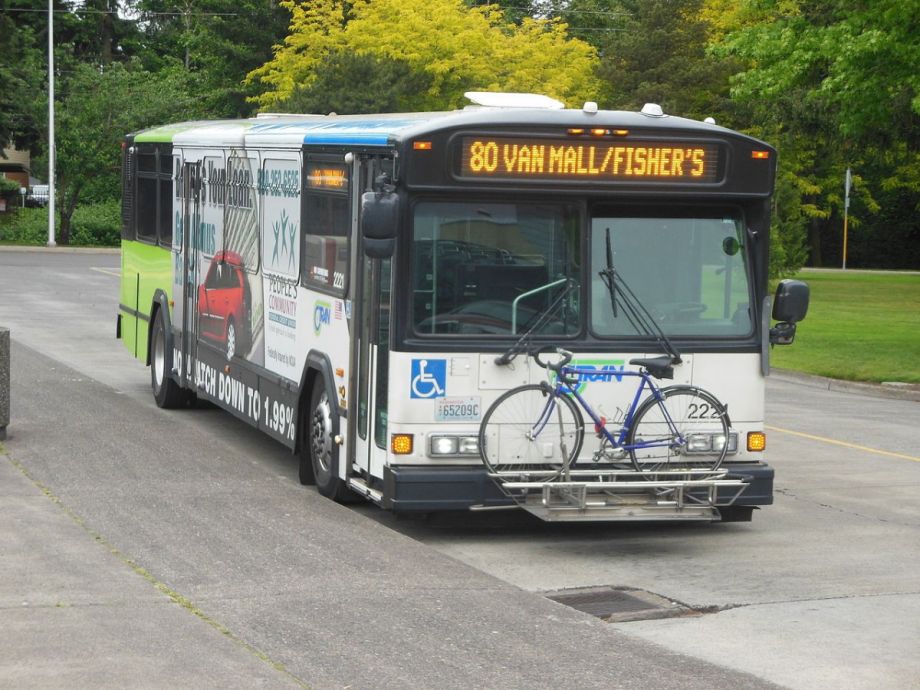 One could call The Vine, the new bus rapid transit line now being built in Vancouver, Washington, as the lemonade the local transit agency made when the voters handed it a lemon.

The lemon, in this case, was voter rejection of a one-tenth-cent sales tax hike in 2012. That tax increase would have funded C-TRAN’s share of the cost of a bridge over the Columbia River between Portland, Oregon, and Vancouver. (Clark County Public Transit Benefit Area Authority, or C-TRAN, is headquartered in Vancouver.) C-TRAN was chipping in because the bridge would have carried Portland’s MAX light rail across it. The light-rail line, in turn, would have connected to a new bus rapid transit line that C-TRAN would have built with the remainder of the proceeds from the tax hike.

C-TRAN had actually been exploring bus rapid transit for two years before the sales tax hike went down. “The idea was first introduced as part of a regional high-capacity transit system plan,” says Scott Patterson, director of planning, development and public affairs for C-TRAN. We had looked at high-travel corridors in the Vancouver area and identified five as candidates for high-capacity transit.”

The rejection of the tax hike threw that larger BRT plan into doubt, and when Oregon pulled the plug on the Columbia River Crossing project, the LRT extension died as well. But C-TRAN had figured out by then that BRT in the Fourth Plain corridor would actually save it money and attract new riders as well.

“Our current projections show operating cost savings upwards of $600,000,” Patterson says, achieved by using fewer, larger buses to operate the route. In addition, because the BRT line would cut travel times significantly — a trip from Vancouver Mall to downtown that now takes 35 to 38 minutes would be 10 minutes faster — C-TRAN estimates the new line would attract 30 percent more riders than use it now.

Combine the increased ridership with the savings in operating costs and you get a nearly $900,000 contribution to C-TRAN’s bottom line. That’s large enough to make the line worth pursuing even without a sales tax hike, which is what C-TRAN decided to do.

C-TRAN’s board voted to draw on uncommitted capital reserves to pay for the local share of The Vine’s $58 million price tag. The $7.4 million that C-TRAN is putting in represents 14 percent of the total; another 6 percent comes from a Regional Mobility Grant from the State of Washington, and the rest comes from the federal government, with the bulk of the 80 percent consisting of a $38.4 million Federal Transit Administration Small Starts grant.

Patterson explains that the Small Starts program, since folded into the overall New Starts program, picked up a larger share of total project costs than New Starts grants for larger projects did. “We were certainly pleased to have gotten that amount,” he says.

The Vine is not a full-blown, dedicated BRT facility like the recently opened CTfastrak in Connecticut instead, it consists of a package of upgrades to facilities on the streets currently used by Routes 4 and 44. These include bus stations with level boarding, low-floor articulated buses, off-board fare collection that allows for all-doors boarding, and signal priority for buses at intersections. C-TRAN had considered additional options, such as a full busway and a park-and-ride facility at Vancouver Mall, but determined that these would not have produced significant additional patronage or time savings.

Would C-TRAN have proceeded with The Vine with a lesser federal match? “It’s harder to answer that question,” Patterson says. The decision would have depended on how much was in C-TRAN’s capital reserve fund and the willingness of its board to spend that money on this project.

Because The Vine will terminate at C-TRAN’s downtown Vancouver transit center, new shuttle bus service will be created to take riders to the end of the MAX line. The savings from BRT will more than fund its operation.

Construction of the line officially began with a ceremonial groundbreaking August 24th at the future Turtle Place terminal in downtown Vancouver. The Vine is expected to go into service in late 2016. The line is the largest capital project in C-TRAN’s history.