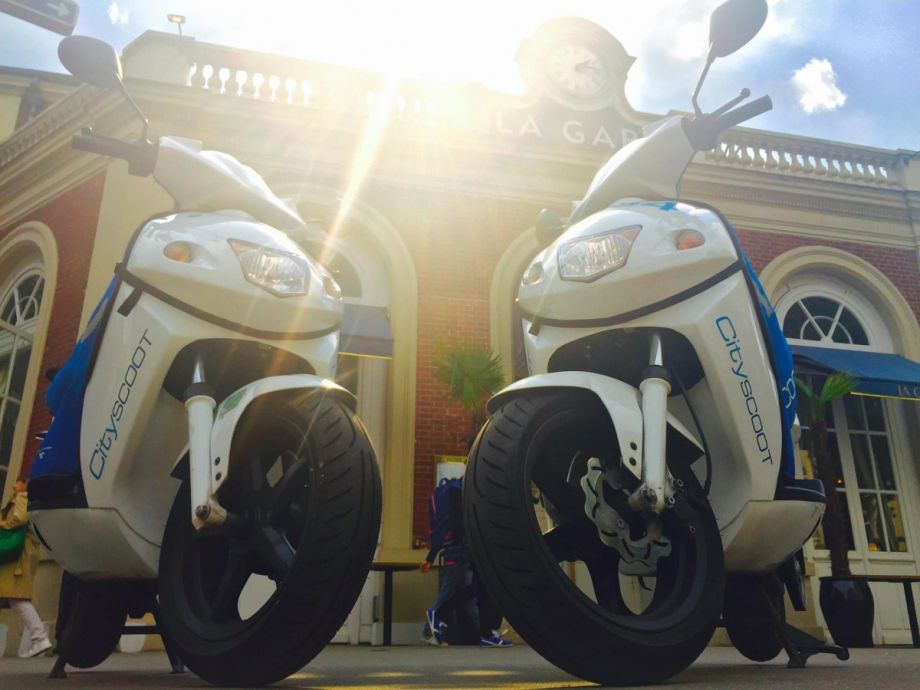 It’s the rollout of the largest fleet of shared electric scooters in the world — 1,000 sleek, white motorbikes to be spread throughout Paris. While that sounds like a modest effort in a city of 2.2 million, it will become the biggest program of its kind to date by the end of this summer.

While Paris’ pioneering Velib bike-share program for kids has been a semi-public effort, this effort is 100 percent driven by a private company called Cityscoot. Having completed what they consider a successful pilot with 50 scooters, the company expects launching the full program in Paris — with its well-established scooter culture and experience with sharing bike and car services — will provide a key demonstration of their vehicles’ viability.

Vincent Bustarret, spokesman for Cityscoot, says that while the electric vehicles are more sophisticated than bicycles, their deployment is actually simpler.

“There are no reserved spaces,” he explains, “so there’s no infrastructure work to do.”

That’s not the only difference from bike-sharing. Because scooters can be dropped off anywhere, the company won’t have to go out and reshuffle them from full corrals to empty ones. Users will not need to pay a subscription fee; they’ll sign up once, and pay per use, €2 per 15 minutes (around $2.25 U.S.).

Bustarret says this should make it simpler for users to mix and match their transportation methods, using scooters when speed is of the essence.

Unlike car-sharing, drivers will also avoid the misery of trying to find a parking space in such a densely packed city. But there will be one shared key barrier: Users must have a proper license to use the motorbikes.

This will pose less of a problem in Paris, where mopeds are commonly used, but would likely prove a barrier to adoption elsewhere.

A (similarly named) company called Scoot Networks launched with 50 scooters in 2012 in San Francisco. Its fleet has grown to around 400 vehicles and now includes both two-wheelers and a four-wheeled electric vehicle called the Scoot Quad, which is made by Nissan.

Carly Keller, a representative for Scoot Networks, says adding four-wheeled vehicles “gave us an opportunity to look at what it would be like for riders to carry a passenger.”

She declined to provide the breakdown of two and four-wheelers saying, “we don’t split out numbers for press use.” Programs in Europe remain relatively small. The company Enjoy keeps 150 in Milan, eMio has a fleet of 150 in Berlin and Scoome operates 50 scooters in Munich and another 50 in Cologne.

Scale is important. Janet Kornblum, a media trainer in her 40s who has been using the scooters in San Francisco for about a year, says the biggest downside has been a lack of availability.

This has made her use of scooters more targeted.

“I use it most when I go to my elderly aunt’s house because I don’t wanna lose my parking space, in a city where parking is horrific,” she says. “I’ve used them to travel at night since I don’t feel comfortable walking.”

Both Paris and San Francisco are fairly eco-conscious places, but Paris is dealing with a pollution problem that reached crisis levels last summer, with the city out-smogging the famously polluted city of Shanghai at one point. This is because the vast majority of France’s cars run on diesel and release more particulates. The government has announced plans to move away from encouraging diesel use but this will take time.

“Unfortunately the impacts of scooter sharing and its users have not been extensively studied. More research is needed to understand the impact of this emerging shared mode,” notes Susan Shaneen, co-director of the Transportation Sustainability Research Center at University of California Berkeley.

But she says, “the air quality benefits of ride-sharing began to really be discussed widely in the 1960s and ‘70s. Ride-sharing is re-emerging as a frequent topic […] as cities try to achieve Climate Action goals,” as well as with the emergence of enabling technology like ride-sharing apps.

The U.S., she believes, will pose more challenges to the scooter model. There’s a reason scooters are already popular in Europe.

“The central core of European cities tends to be higher density, more mixed-use, and in particular, [they] have narrower streets,” she points out. “In much of the U.S., the urban form is quite different. For example, speed limits are generally much higher and lanes are much wider, making U.S. roadways more conducive for automobiles.”

While currently focused in Paris, Cityscoot has interest in later expansions to other French and European cities — long before it would dare to venture out into tougher markets like the U.S. Scoot Networks in San Francisco, which has significant venture capital investment, also has plans to forge ahead in other cities “around the world.”