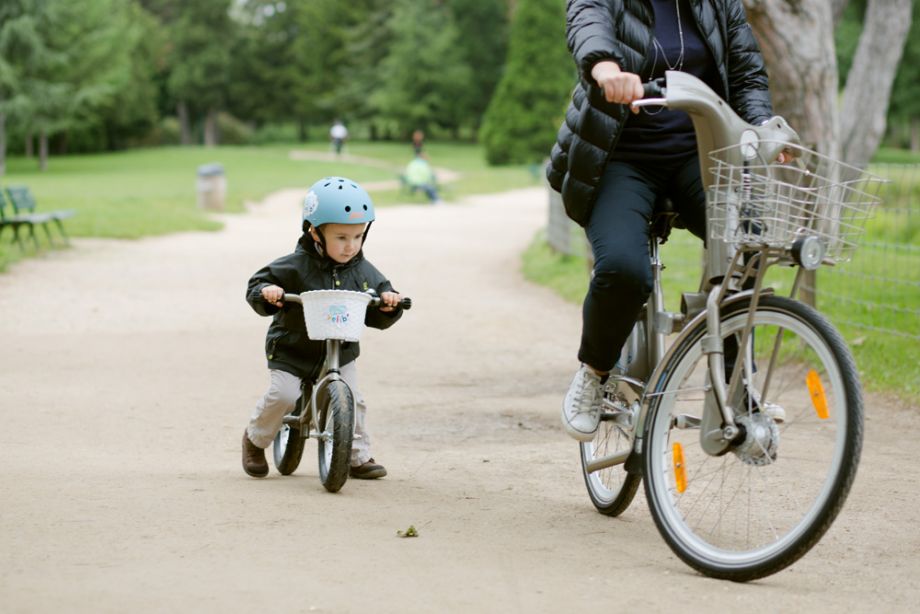 Bike-Sharing for Kids
Paris’ pioneering Vélib’ bike-share system is launching a new service to get the next generation of bike-sharers ready to ride.

Called P’tit Vélib’, the service offers wheels — including training wheels — to the preteen set. P’tit Vélib’, which began operations in mid-June at five locations and will launch at two more in mid-July along with two seasonal, event-oriented locations, offers bikes for riders as young as age 2. Two- to 4-year-olds can learn balance skills on bikes without pedals, and children 3 and older can borrow working bikes to ride along with their parents: a 12-inch model with removable training wheels, a 16-incher for 5- to 7-year-olds and a 20-incher for kids 8 and up. Helmets will be available for rental as well at all P’tit Vélib’ bike-sharing stations. Rates start at €4 per hour but vary by operator and location.

“Because good habits start early, la Mairie de Paris and Parisians wish to familiarize the young in the use of more environmentally friendly transport means at the earliest possible age,” the city government says on its Vélib’ blog, Le Mag’.

The P’tit Vélib’ stations are all located in parks or pedestrian areas of the city where children can learn to cycle safely without interference from auto traffic.

Eltis reports that technical partner JCDecaux manufactured the 300 bikes being offered through P’tit Vélib’. The stations are being operated by local community groups and small businesses in partnership with the Paris city government.

The World’s First International Metro Line?
Last week, I told you about a project in El Paso, Texas, that would revive — at least in spirit — the last international streetcar line in North America, though only on the American side of the border. This week, I have news of a regional transportation plan that, once fully implemented, would produce the first international metro line in the world.

Railway Gazette reports that two Swedish construction and engineering firms, Skanska and Sweco, have floated a proposal at a recent conference on managing growth in the Øresund (Swedish: Öresund) region that would, among other things, extend the Copenhagen metro across the channel to Malmö.

The proposal is part of a larger plan to channel growth in the region that includes the two cities into denser urban corridors served by high-capacity public transport and bike facilities to reduce the need for auto travel in the region. Skanska and Sweco outlined that plan at the Øresundhusset regional conference on June 30th.

Skanska has already traveled this road — and railroad — before: It built the first permanent crossing of the Øresund, the Øresund Fixed Crossing, a 12-km bridge-tunnel that carries a motorway and two-track rail line across the Øresund strait that opened in 2000.

At the conference, the companies noted that the region that includes Denmark’s capital and largest city and Sweden’s second-largest city and chief port of entry from the rest of Europe is projected to add one million more residents over the next 50 years. Skanska and Sweco propose that this growth be concentrated in a “densified” corridor incorporating the cities of Copenhagen, Malmö, Lund and Helsingborg.

Their proposed transport system for this corridor includes undersea crossings at two locations. The more northerly crossing, between Helsingborg, Sweden, and Helsingør, Denmark, would consist of separate road and rail tunnels of 15 km and 9 km respectively for long-haul passenger and freight traffic. These could be completed by 2025 under a public-private partnership arrangement at a cost of 25 billion Swedish kronor (US$3.75 billion).

The southerly crossing would extend the Copenhagen metro east across the strait to Malmö and create a regional transportation hub at Copenhagen International Airport. The companies also envision this tunnel carrying regional rail lines that would allow greater integration of the suburban rail services in both cities. The tunnel could be completed by 2030; the companies did not provide a cost estimate.

The comprehensive proposal also includes a third fixed crossing to carry high-speed trains between Sweden and the rest of Europe and adding bicycle facilities to the existing Oresund Fixed Crossing that would connect to a 300-km network of “super bike paths” on both sides of the span.

Jerusalem Light Rail Line Service Suspended After Violence
Though this column is normally devoted to news of new transport projects, I must pause this week to take note of a tragic service interruption.

Service beyond Ammunition Hill station on the Jerusalem light rail line has been suspended indefinitely after three days of violence in which right-wing Jews attacked Arab Palestinians riding the trams through the city center and Palestinians torched stations on the line after Shuafat resident Mohammed Abu Khudeir’s burned body was found dumped in a field in West Jerusalem. Shuafat station itself was completely destroyed in the Arab rampage, and the other two light rail stations serving Palestinian communities in East Jerusalem were severely damaged.

Palestinians charge that the murder of Abu Khudeir was a revenge move for the botched kidnaping of Israeli West Bank settlers that resulted in the deaths of three Israeli students on June 12th. The Jewish attacks on Arab tram riders occurred on the heels of a July 1st Israeli state funeral for the three students.

The Jerusalem light rail line, which opened for service two years ago, was promoted by Israeli officials as a step that would bridge the Arab-Israeli divide and knit together the still-divided city. It is unique among Jerusalem transit services in that it operates across the 1948 armistice line that divided the city in two, announces its stops in Arabic as well as Hebrew and English, and carries advertising in Arabic. As an item in _The Economist_’s “Pomegranate” blog notes (registration may be required), “the sleek, 14-km-long tramway mixes populations in ways unseen since the end of the British mandate in 1948.”

Palestinian activists, however, opposed the line’s construction, claiming the light rail line was meant to solidify both Israeli control of all Jerusalem and the permanence of Jewish settlements in East Jerusalem, which has been under Israeli administration since the 1967 Six-Day War. Only three of the light rail line’s 10 stations east of the Damascus Gate are served by the Palestinian-run East Jerusalem bus system, including ruined Shuafat; all the others are served by the Israeli-run bus system serving West Jerusalem. (Israeli news channel Arutz Sheva has video footage of the damage.)

Israeli officials, including Premier Benjamin Netanyahu and Jerusalem Mayor Nir Barkat, condemned the murder of Abu Khudeir while casting doubt on the claims that it was an act of vengeance. American and Israeli news reports of arrests made in connection with the murder yesterday, however, raise anew the possibility that it was indeed an act of vengeance on the part of right-wing Jewish nationalists.

Obviously, it will take more than good mass transit to bridge the gulf that remains between Palestinians and Israelis, even in the city both claim as their capital.