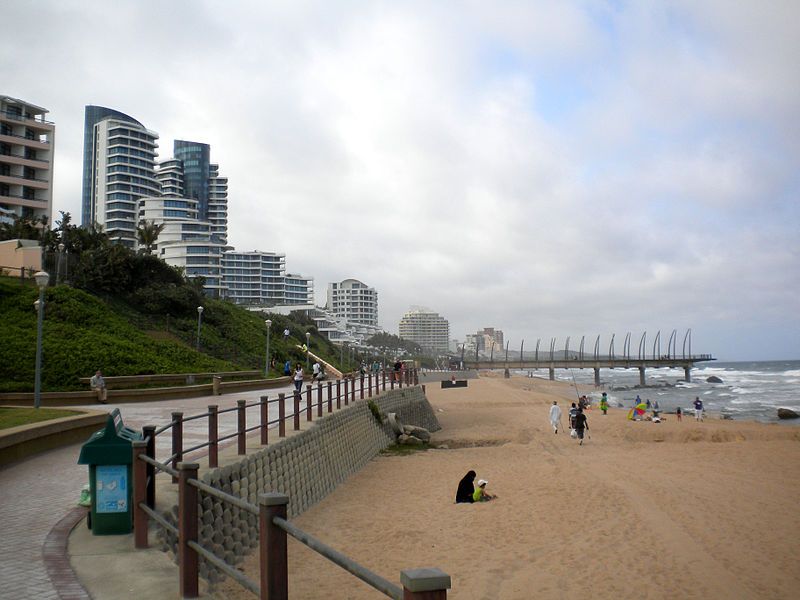 Umhlanga is one of Durban’s wealthiest neighborhoods, and its most successful Urban Improvement District. Photo credit: Andres de Wet via Wikipedia

Umhlanga is where Durban’s jet set lives. There are more millionaires per square kilometer in this neighborhood than anywhere else in the city. Plush apartment blocks with spectacular views of the Indian Ocean are surrounded by a bewildering array of fancy restaurants, shopping malls and luxury car dealerships. Today, Umhlanga is clean, tidy and well run. But five years ago it was a dump. Tourists were mugged on the beach, buildings were falling into disrepair and well-heeled residents were threatening to emigrate.

UIPs are just catching on in Durban, and Umhlanga’s is the biggest success story thus far. When it was initially established, Brian Wright, who coordinates the UIP for the neighborhood, immediately set out to rectify the many problems plaguing the area. “We transformed a barren park, we fixed a fence, we tidied up some pavement pavers,” he says. “We straightened poles and we tried to demonstrate what we could be. We created pockets of excellence and we put ourselves onto a growth trajectory.”

With the total value of buildings in the UIP area hovering around roughly R7.5 billion ($750 million USD), the UIP’s comparative budget is relatively small: R7 million, or $700 000. But since it gained traction, another $400 million in property developments have been approved. People loved it, says resident Trevor Edwards, a retired businessman who now rates Umhlanga as the best place to live in South Africa, even better than the exclusive coastal resort and swanky Camps Bay in Cape Town where he also owns homes.

“Umhlanga was going backwards at a hell of a rate,” says Edwards. “If we didn’t start fixing the broken windows we would have gone nowhere. We started cleaning and greening, and the place started looking fantastic. It encouraged good behavior. When we started, everyone complained about paying more rates. Now so many people are flocking to Umhlanga the businesses can’t keep up with the demand.”

And property owners love it because the value of their investment keeps escalating. In the space of three years Edwards bought his 900-square-meter penthouse for $1.6 million and sold it for $3.4 million.

Wright says the initial clean up helped business and residents reclaim public spaces. They stopped complaining about paying $20 more in rates each month when they realized that a pragmatic approach to city management would only help them determine their vision for their neighborhood, rather than have it dictated by the administration.

The UIPs throw into stark relief a fact of life in Durban and many South African cities: A large portion of government spending is directed at uplifting those who were historically disadvantaged by Apartheid. In principle, most Durbanites support this policy. But in reality, a fair amount of griping about poor urban maintenance occurs in wealthier neighborhoods, where underfunded city services are considered, if not poor, at least haphazard. The UIPs essentially create an option for residents who complain about broken street signs and filthy parks to pay more to upgrade their neighborhoods. The model is similar to that of business improvement districts in North America, except that those are usually paid for by commercial enterprises only. In Durban, residents themselves contribute, too.

John de Canha is the general manager of the Beverly Hills hotel, probably the fanciest in Umhlanga. He has worked for hotels in the U.S. and Europe and has extensive experience in South Africa’s hospitality industry. He says the UIP offers an opportunity for engagement with the municipality. “The government is under stress with a range of demands… This is a way of ensuring your investment is secure. If the window pane is broken it’s not long before the frame is broken, the window is kicked in and squatters move in. It’s no use sitting back and complaining, you have to do something yourself.”

Wright says UIPs require energy, time and effort. They create a framework for a healthy, rewarding public-private partnership that deliver mutual benefit to the private sector and local authorities.

“It actually allows us to raise our expectations of government by optimizing services,” he says, adding that because of the UIPs’ success the municipality has invested about $10 million in infrastructural upgrades. “UIPs are all about creating sustainable structures that align the thinking of property owners and stakeholders in a precinct around the shared vision. In partnership with the local municipalities they drive service delivery… This all creates desirable nodes that have the flexibility to change and the resilience to endure.”

The success of the Umhlanga UIP has sparked interest elsewhere in the city. At least five other UIPs are either in the pipeline or in the formative stages of being established, and city spokeswoman Tozi Mthethwa says Durban is assessing the logistics of extending even more of them. “We are looking at logistics and funding models to make it more effective and sustainable… and expanding the model to other key areas.”