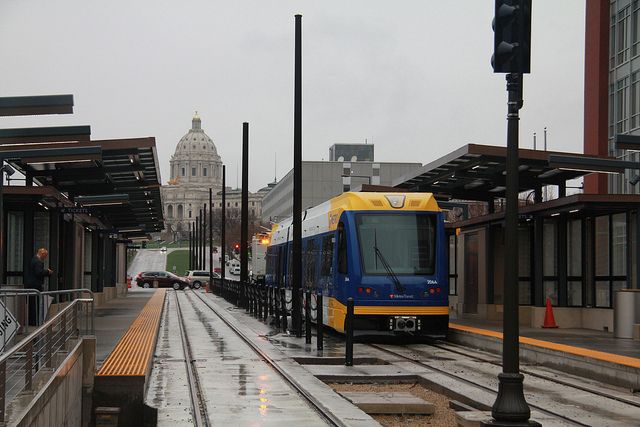 The new Green Line light rail in the Twin Cities, also known as the Central Corridor, took its first clearance test run at the end of April. Set to open in the summer of 2014, it will run from Target Field, where the Minnesota Twins play in Minneapolis, through the University of Minnesota and past the State Capitol to downtown Saint Paul.

This is just one of many indicators that things are looking good in the urban center that exiting suburban Minnesota Rep. Michele Bachmann probably never really understood.

Another is the housing market. Like cities across the country, the Twin Cities are seeing values ticking upwards and demand on a “crazy high,” as Andy Fazendin, president of the Minneapolis Area Association of Realtors, told Minnesota Public Radio earlier this month.

The potential downside to the growth? Displacement.

As researchers at the Dukakis Center for Urban and Regional Policy have documented, transit investment can “sometimes lead to undesirable forms of neighborhood change” such as a mass pricing-out. Plus, when St. Paul built its freeway in the 1960s, it rammed straight through a primarily African-American neighborhood, taking out businesses and destroying residential blocks. That freeway is only two blocks south of the light rail’s route. Naturally, when people heard about the light rail, memories bubbled back.

“…There was a lot of fear when the light rail was proposed among many folks that, you know, here we go again,” said Jonathan Sage-Martinson, director of Central Corridor Funders Collaborative. (CCFC), a local non-profit.

An alliance of 13 local and national foundations, CCFC is trying to make sure those fears are not realized. The group is investing $20 million over a 10-year period to make sure its vision for a mixed-income, diverse community along the 11-mile route comes to life. (Disclosure: Next City and CCFC receive support from some of the same foundations.)

“This needs to not just be about land use,” Sage-Martinson told me. “It needs to be about equitable transit-oriented development. It needs to be about not just how the region will benefit from having a light rail line, but the neighbors and the residents. That ethic has been the work that has been going on and the reason we formed the collaborative and the work we’re supporting.”

CCFC is invested in everything from fostering strong local businesses to smart use of greenspaces, but its affordable housing agenda is one of the more ambitious tenets of its vision. The plan calls for 4,500 new or preserved housing units with “enduring affordability” along the corridor before 2020.

Sometimes the word “preserve” in housing or job plans can get murky. (Like the New Jersey Urban Transit Hub Tax Credit, where companies receive incentives for preserving jobs that are at risk of leaving the state. How do you determine a job that’s at risk? Seems too subjective.) But here it strikes me as a way to make sure that affordable housing stays that way. You don’t want existing housing for lower- and middle-class families to turn into market-rate lofts, while the affordable housing gets developed 10 blocks away in less desirable areas.

Not to be overly optimistic, but if the early returns on the affordable housing strategies are any indication, CCFC and their partners will hit that 4,500 number well before 2020. In its annual tracking report, which was released just before the light rail was first tested for clearance, the group reported 2,159 new or preserved affordable units in the Central Corridor. That’s nearly half the goal in the first two years.

It’s easy to idealize rosy planning projects, especially when the Green Line hasn’t started serving the nice people of the Twin Cities yet. Everything looks good on paper. But the most recent report indicates that, at least so far, reality is jibing with vision.