Tuk Tuk Go: Is This the Vehicle That Will Rescue Public Transit? – Next City

Tuk Tuk Go: Is This the Vehicle That Will Rescue Public Transit? 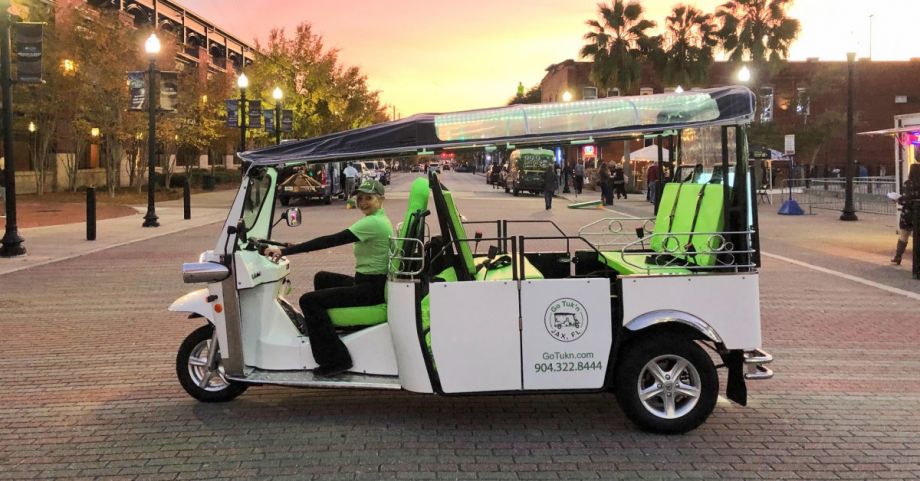 Welcome to “The Mobile City,” our weekly roundup of noteworthy urban transportation developments.

One thing has become clear in this current pandemic: The last thing anyone should want to do is spend lots of time in an enclosed space with lots of other people close by. Even though no known COVID-19 clusters have originated on public transit yet, many riders remain chary of boarding trains and buses for this reason. That probably makes things safer for those who still ride, but what about the non-riders who still need to go places and would rather not drive? A century-old form of open-air public transport popular in Asia and the Middle East — the tuk-tuk, or rickshaw — might just be the answer, and several American cities are trying them out and expanding their reach.

Another option, of course, is the original form of mobility, your own two feet. One reason more people don’t walk to nearby destinations is because our urban environments are designed to discourage it. “Walkability” has long since become a Holy Grail for planners and urbanists seeking ideal urban landscapes, but you might be surprised to learn which American city is now planning to make some of its neighborhoods walkable by design.

Meanwhile, in California, the trials and tribulations of the California High-Speed Rail Authority’s project to build a new rail line connecting Los Angeles with San Francisco have led some to wonder whether the state’s two largest cities will ever see trains zipping between them. High-speed rail fans can take solace, then, in the latest news from the private outfit building a line connecting LA with Las Vegas: A fresh infusion of funds make it likely that trains will make that run starting in 2023, at least as far as LA’s outskirts.

The reason you can dine outdoors but not inside in many cities now is simple: Inside, it’s harder to keep enough fresh air flowing to sufficiently disperse the COVID-19 coronavirus if an infected person enters.

That’s less of a problem on public transit vehicles than many believe, as European research indicates, but were it not for social distancing and mask-wearing, it would likely be a bigger one. Those strategies, however, mean the buses and trains can’t carry as many people as they once did, which leaves cities with unmet demand for local mobility.

At the very local level, Smart Cities Dive reports that a growing number of U.S. cities are finding that they can meet that demand by turning to a century-old solution.

That solution goes by the names “tuk tuk,” “rickshaw” and “pedicab.” These three-wheeled vehicles are completely open and carry anywhere from two to six passengers. Pedicabs are human-powered, while rickshaws and tuk tuks have motors.

The latest transit agency to adopt these as a micromobility solution is the Jacksonville Transportation Authority (JTA) in Florida. The JTA has contracted with a local firm, Go Tuk’n, to offer a pay-to-ride shuttle service around two downtown Jacksonville neighborhoods. The service works a little like the “dial-a-ride” services transportation agencies have offered disabled riders for years: Residents can reserve a spot on one of the “Tuk ‘n’ Ride” shuttles when they want to go to neighborhood businesses and restaurants.

The JTA benefits by being able to offer patrons a door-to-door local mobility option, and Go Tuk’n gains by showing that rickshaws can be more than tourist attractions. The small size of the vehicles also means more destinations can be served.

“If we can show how to move people around urban areas, we might have people saying, ‘I don’t have to bring my own vehicle downtown,’” Go Tuk’n CEO Stephanie Dale told Smart Cities Dive. “We cover distances that aren’t walkable, and we can get onto the roads that buses can’t do very easily.”

That, however, doesn’t mean that the city has no power at all to shape how it grows and develops. While who gets to build what where may be left up to deed covenants to settle, the city can still issue rules that say how what gets built gets built.

And the Houston Chronicle reports that the city is about to use that power to make some of its neighborhoods more pedestrian- and transit-friendly.

The city plans to advance walkable neighborhoods via two programs. One will designate selected districts as “Walkable Places” and rewrite the rules so that the entire district is more pedestrian-friendly; the other, the “Transit-Oriented Development” program, seeks to apply the same rules to streets within a half-mile of a train or bus rapid transit station.

In both cases, the new rules get rid of mandated building setbacks, reduce or eliminate required parking minimums, move parking lots to the side or rear of building lots and double the width of sidewalks. All of these changes undo auto-oriented rules the city adopted in the 1990s. In addition, they mandate a buffer zone between sidewalk and curb, limit fence heights and require that a certain percentage of commercial buildings’ ground floors be visible through doors and windows.

The “walkable places” designation will initially apply to three areas: along Emancipation Avenue and in neighboring Midtown, both southwest of downtown Houston, and along Hogan and Lorraine streets on the Near Northside. The “transit-oriented development” rules will apply wherever the criteria are met citywide. Streets where more than half the structures are single-family residences would be exempt.

Houston Mayor Sylvester Turner described the new rules as key to building a Houston that’s ready for the future. And an annual survey conducted by Rice University shows that a good chunk of Harris County is ready for it: When asked whether they would prefer living in a traditional single-family residential neighborhood or in a smaller house that’s within walking distance of neighborhood shops and amenities, half of the respondents choose each option.

“That means the demand is ahead of supply. Fifty percent of the neighborhoods in Houston are not walkable,” Bill Fulton, director of Rice’s Kinder Institute for Urban Research, told the Chonicle. “You’ve got to start somewhere. There’s clearly a demand for this type of living, even in Houston and even in this climate.”

Brightline, the private company embarking on a project to build a high-speed rail line from LA to Las Vegas, is on track to break ground on its project by year’s end and have trains running from Las Vegas to Victorville, 81 miles northeast of Los Angeles in San Bernardino County, by 2023.

Funding to begin construction has been assured, Railway Track and Structures reports, by private activity bonds issued by the states of California and Nevada. The bonds can be used to leverage additional borrowing on the private market; the terms of the bonds allow Brightline to raise four times their amount by issuing tax-exempt bonds to private investors. Nevada’s $200 million, then, can produce an additional $800 million in financing, while the $600 million in bonds from California could produce $2.4 billion in additional funding.

The total estimated price tag for the 185-mile XpressWest line from Las Vegas to Victorville is $6.9 billion. Brightline projects that 10 million passengers a year will ride the 200-mph trains when the line opens. Future plans call for extending the line all the way to Los Angeles Union Station.

Know of a project that should be featured in this column? Send a Tweet with links to @MarketStEl using the hashtag #mobilecity.