A mile and a half apart, two Houston developments show two different approaches to address the neighborhood’s rapid gentrification. 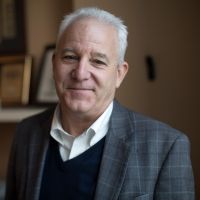 A rendering of a patio at The Plant House, planned by Concept Neighborhood in Houston's East End. (Rendering courtesy of Cultivate Land)

This essay is adapted from William Fulton’s latest book, “Place and Prosperity: How Cities Help Us To Connect And Innovate.”

Located just east of Downtown Houston, the ZIP code 77003 is by some accounts the third-fastest gentrifying postal zone in the country.

The ZIP code encompasses East End, also known as the Second Ward, a traditionally Hispanic neighborhood that used to be a bustling center of blue-collar business and manufacturing. An old Maxwell House plant once infused the whole neighborhood with the smell of coffee. Navigation Boulevard is still a center of Hispanic life, revolving around the legendary Original Ninfa’s Mexican restaurant. Just across Buffalo Bayou to the North, technically located in the Fifth Ward, lies a 150-acre site that formerly housed a sprawling complex for Kellogg, Brown and Root, Houston’s legendary engineering giant.

Today, the neighborhood is changing quickly. A new light rail line running down Harrisburg Avenue puts the East End five minutes away from jobs-rich downtown Houston and Minute Maid Park. (In a nod to the neighborhood’s history, one of the stations is known as “Coffee Plant.”) Classic Houston-style townhomes – three stories, garage loaded from the street, with a foot or two in between them – are popping up everywhere in the neighborhood. If you hang around the East End long enough, you will hear stories of developers trying to frighten long-time homeowners to get them to sell out.

You’ll also find two very different approaches to dealing with the gentrification problem. On the old Kellogg, Brown and Root site – perhaps the largest vacant site in any urban location in the United States – the mixed-use developer Midway is building a massive project known as “East River,” with a nine-hole golf course and a traditional Texas “ice house.” The first phase of the project will also include office space, apartments and upscale retail. It’s the kind of project you’d see featured by the local Urban Land Institute chapter.

The Midway folks know that they are going to gentrify the neighborhood; they’re very open about the fact that their project will drive up property values and there’s not a whole lot they can do about it. To mitigate the damage, they’ve entered into a “Community Benefits Agreement” with the Fifth Ward Community Reinvestment Corporation – a legal agreement in which the developer promises to help the neighborhood in many ways. Among other things, Midway made a commitment to affordable housing, discounted rents for pop-up retail, participation in a newly formed Community Advisory Council, grants to area nonprofits, and efforts to work with local groups to identify neighborhood residents who might be able to work on construction of the project. Though it’s not as extensive as some CBAs, it’s a start.

A mile and a half away from the East River project, a smaller group of developers is taking a very different approach. The “Concept Neighborhood” group has acquired several parcels near the Coffee Plant light rail stop and plans on retrofitting older buildings for a wide variety of activities, including space for creative artists. In an old retail building along Harrisburg, they are nurturing small, locally-owned businesses: a restaurant, a wine bar, an 800-square-foot bodega, a popsicle factory. Some of commercial tenants are on a sliding scale of rents based on their sales and most of the items for sale are priced modestly, so longtime local residents can afford them. Jeff Kaplan, one of Concept Neighborhood’s partners, says the idea is to create a neighborhood where residents can live car-free in this notoriously car-oriented city.

Of course, Kaplan and his partners know that no matter how they approach their properties, they too are gentrifiers. The value of their property will go up no matter what, to the detriment of some local residents. And they’re occasionally criticized by the locals despite their sensitive approach. But the larger point is that East River and Concept Neighborhood are moving forward with investing in the East End – while addressing gentrification in different ways.

Gentrification is usually depicted as a black-and-white, good-and-bad problem: Place amenities are piling up in certain locations, affluent people are “place hoarding,” and gentrification threatens longtime residents of neighborhoods with good bones and good locations.

There’s certainly a lot of truth to this narrative: Affluent residents are taking over neighborhoods, and longtime residents of modest means are being displaced as a result. But as the Houston East End story shows, the solutions are more nuanced than the standard narrative suggests.

We’ve seen, for example, many neighborhoods resist gentrification by resisting investment. But deflecting investment is the last thing a long-ignored neighborhood should want. The question is not how to deflect investment – but, rather, how to ensure it benefits people who live in the neighborhood already as well as newcomers.

The acceleration of gentrification has changed the whole concept of economic development in the United States. Previously, the main philosophical battle was over subsidies — essentially, who pays. Now, the battle is over who reaps the benefits.

Twenty years ago – at the beginning of the internet revolution – economic development experts began to envision an entirely different type of U.S. economy than the traditional manufacturing-based economy of the past. The lodestone of this new vision was Richard Florida’s 2002 bestseller “The Creative Class,” which argued that the future of the U.S. economy depended on knowledge workers generally and the tech innovation sector in particular. The focus of economic development thus shifted from chasing smokestacks to chasing smart kids sitting in coffee shops wearing hoodies and working on their laptops. In the end, the idea was that everybody would benefit from this transition to a knowledge-based, high value-added economy.

As Enrico Moretti showed in his landmark book, “The New Geography of Jobs,” even service workers were paid more in locations where the innovation economy was thriving. But making $14 an hour as a barista doesn’t help much when the average house goes for a couple million dollars, as it does in Silicon Valley — and therein lay the problem.

The tech economy concentrated wealth in a few major cities — New York, San Francisco, Los Angeles — while the rest of the United States was left behind. Even within those cities, some neighborhoods became unbelievably prosperous, while others — only a few miles away or sometimes even a few blocks away — withered. And sometimes, strangely enough, both happened in the same location, with a booming economy laid atop a struggling neighborhood – as in Houston’s East End.

This is the conundrum of economic development today. Places are improved by prosperity — indeed, places cannot thrive without prosperity. But in a society with deepening inequality, places (and people) can also be overrun by prosperity. So how do you restore the balance between place and prosperity in a way that is equitable? This question goes to the most fundamental question about cities today: Can they truly be a vehicle for upward mobility, or will they simply be a space shared by the rich and poor while middle-class folks — to the extent that they still exist — flee to the suburbs or even the exurbs?

No one knows the answer for sure. The Community Benefits Agreement approach taken by East River (and many other developers around the country) constitutes a kind of “mitigation” approach: Let’s give something back to the community to make up for the harm we’re doing. The Concept Neighborhood approach is more like a “do no harm” approach, or at least a “do as little harm as possible” approach: Let’s give the neighborhood as many opportunities as possible.

Efforts to ensure affordable housing and job opportunities for residents in long-neglected neighborhoods are key to ensuring that those neighborhoods remain vital and diverse in the future. For cities to work, their markets have to work, and in a world where some people have a lot of money and most people don’t, it’s very hard for markets to work properly.

The anti-gentrification approaches taken in recent years sometimes seem like mere bandages, dulling the problem but not solving it. But that’s why we need to keep trying different approaches, like the Concept Neighborhood idea, that take advantage of market trends – but respect the underlying culture and economics of gentrifying neighborhoods.

This essay has been corrected to reflect that some of the businesses at the Plant are on a sliding scale, not all of them. We regret the error.

William Fulton is a leading voice in urban planning. He currently serves as a Senior Advisor to PFM Management and Budget Consulting and a Fellow at the Terner Center for Housing Innovation at UC Berkeley. He is the author of several books, including most recently “Place and Prosperity: How Cities Help Us To Connect And Innovate.”