Focus on Your Existing Transit, Toronto – Next City

Focus on Your Existing Transit, Toronto 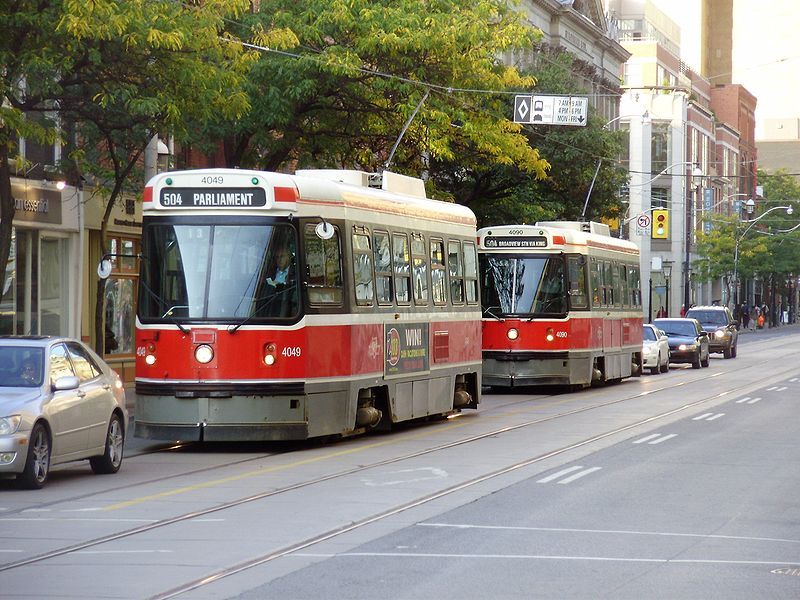 Despite having dedicated lanes in theory, Toronto streetcars on King Street must share space with cars and trucks.

Toronto, the largest city in Canada, is positively booming. With 147 high-rise buildings under construction, it mops the floor with runner-up New York, which Toronto’s chief planner, Jen Keesmaat, brags “isn’t even a close second, at 90,” despite having a population three times Toronto’s size. Part of this has to do with the fact that the Canadian real estate boom never went bust during the late 2000s. Or maybe it’s the provincial Places to Grow Act and the Ontario Municipal Board, which can foist smart growth on unwilling jurisdictions. Whatever the reason, Toronto grew at Houston-like proportions between 2000 and 2010, and shows no signs of slowing down.

Yet transit infrastructure has not kept up. While Vancouver has been building out its driverless SkyTrain metro network for years — it now has 2.7 kilometers of metro per 100,000 people, more than any city in North America besides Washington, D.C., which it will surpass in two years once the Evergreen Line opens — Toronto’s transit expansion has been much slower.

And the lines it has built aren’t always the most useful. The five-stop Sheppard subway, opened in 2002, was meant to shift development away from Toronto’s crowded core — that obviously never happened — and the expensive suburban underground line’s ridership is about equal to the city’s most traveled streetcar route. The Scarborough RT opened not three decades ago, but will soon be partially replaced by a subway. (Building subways to the suburbs is a hallowed Toronto tradition).

Meanwhile, region’s most needed project, the tentatively titled Downtown Relief Line, has no funding. The line would form a shallow “U” and relieve pressure on the overcrowded Yonge–University–Spadina Line, which has the busiest two tracks of any subway line in North America. Mayoral candidate John Tory (of the confusingly named Progressive Conservative Party of Ontario) has made that line the centerpiece of his campaign, but one of his challengers says it’s unrealistic to open it before 2031. In any case, Toronto suffers from the same subway-building cost disease as U.S. cities, which makes new lines all the more difficult.

For the near future, residents of the multiplying glass towers in Toronto’s core — which has no new lines under construction and hasn’t gotten any new subways for half a century — will have to make the most of the city’s existing infrastructure. On the Yonge–University–Spadina Line, a new signaling system will become operational in 2016 and result in automatic trains, which would reduce the minimum service headway and increase total peak capacity by about a third.

But the subways are already relatively efficient, and the biggest gains to make are in the city’s aging streetcar and commuter rail networks.

The streetcars that run on so many of Toronto’s main streets are left over from the pre-war era and are, for the most part, not built to light-rail standards. They must duke it out in traffic with cars and trucks, facing competition that wasn’t around when they were first built, before mass motorization.

Slowly, the streetcars are getting their own lanes. They still suffer from slow speeds, though, due to a lack of real signal priority — drivers have to wait at lights as single-occupancy vehicles cross, and wait for vehicles making left turns across the streetcar tracks — and an inefficient front-door-only boarding policy, necessary when surface transit refuses to adopt proof-of-payment ticketing. The city’s busiest streetcar line, on King Street, only has dedicated lanes in theory, while in practice the rules are rarely enforced. Giving it more priority over general traffic has been discussed ad nauseum, but has yet to happen.

Perhaps the biggest gains, though, are on GO Transit, the region’s suburban rail network. Currently, it operates like its counterparts in the U.S. — mainly as a system to funnel commuters into the heart of downtown, while those traveling elsewhere or outside of peak hours are an afterthought. But the system is edging toward rapid transit operation, loosely following the European and Japanese model of upgrading suburban trains so they run more frequently, like subways.

On one count, the system is already ahead of those in the U.S. Rather than a labor-intensive fare system where conductors walk through the train and punch everyone’s ticket, it uses proof-of-payment. The crews, however, are still quite large — each train runs with an operator, fare checker and guard, compared to just a single employee (the driver) in Europe. Given that labor is by far the largest share of transit operating costs, this makes the trains quite expensive to run, therefore limiting how frequently they come given a fixed budget.

GO Transit is also making progress on all-day service, a key step in moving away from commuter rail and toward more rapid transit-like regional rail. Each branch now sees a train at least twice an hour throughout the day, making the system useful outside of the peak period.

The biggest problem, though, is the network’s lack of electrification. The trains are still hauled by diesel locomotives, which are expensive, polluting and slow to accelerate, making more frequent stopping patterns time-consuming and, in many cases, impossible. Critics have accused Metrolinx (which runs GO Trains) of not understanding the transformational value in electrification. While the agency disputes that, noting that it’s recommended moving forward with electrifying two of its lines, this project is only in the environmental review phase.

Toronto has traditionally lagged behind Vancouver when it comes to transit, but the city’s tremendous building boom is putting pressure on existing infrastructure. While Tory is not guaranteed to win the mayor’s race this year, his selection of the Downtown Relief Line as his number-one issue may force competitors to put forth their own transit plans. While the Downtown Relief Line is needed, perhaps some candidates will also see that making better use of Toronto’s existing transit infrastructure is the fastest way toward decongesting its hardening arteries.