When Will More Cities Follow San Francisco’s Lead for Faster Buses? – Next City 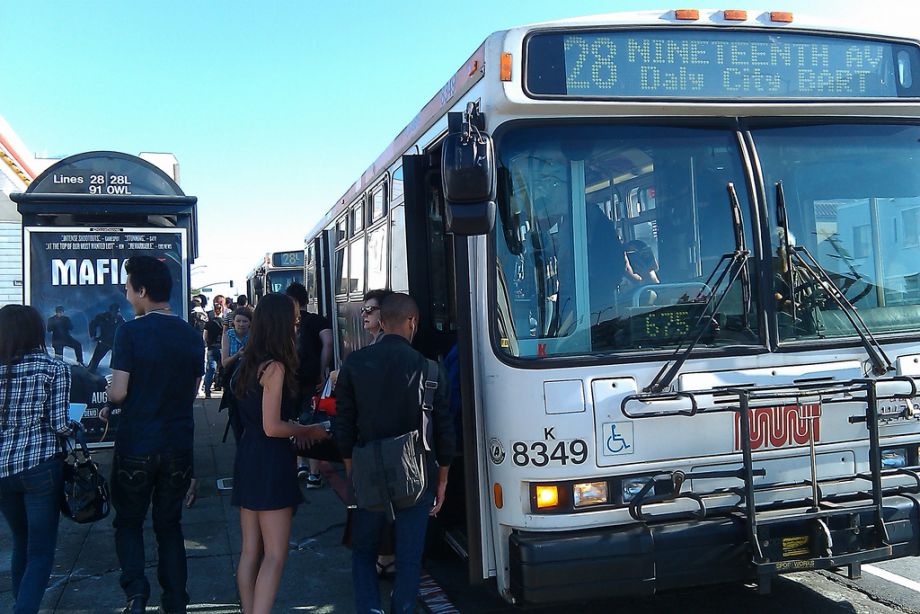 Dozens of times a day, outside the Popeyes on Empire Boulevard in Brooklyn, a crowd assembles to wait for the bus. The B43 isn’t a high-ridership bus for New York City, but this stop is near a train station and sees a lot of traffic. The bus comes every 10 minutes or so during the day — in theory, at least. Despite this being the very start of the route, delays of twice as long are not unheard of, further magnifying the size of the crowd waiting on this desolate strip, zoned only for fast food restaurants and their parking lots. The spot is not blessed with trees or a bus shelter.

When the bus does come, the passengers line up single-file, like kindergarteners, to swipe their MetroCards or drop a pocket full of change into the machine. The whole ritual, which repeats itself in big cities across the U.S., takes about one whole traffic cycle: If the bus arrives when the light is green, it will have turned red when it’s time to go. Then the bus heads off on its slow journey through Crown Heights, Bed-Stuy and Williamsburg, where it repeats the show with lesser crowds. The whole journey is maybe eight miles, but can take up to an hour and 15 minutes at rush hour.

There is, however, another way. A few blocks to the east is the B44 SBS, for Select Bus Service — New York’s brand of bus rapid transit, or BRT — which travels much faster. Dedicated lanes are BRT’s most visible feature, but on high-ridership routes it’s the boarding procedure that makes things run smoother. Rather than lining up single-file to prove that they paid their fare, riders buy tickets at nearby machines and board from all doors, as if the bus were a train. On most trips, nobody checks the tickets. But occasionally fare inspectors board the bus and make sure everyone has paid the fare, fining those who don’t.

Proof-of-payment ticketing, as it’s called, was perfected on buses and trains in German-speaking countries after World War II and has since become ubiquitous throughout Europe. It’s often faster or cheaper and less labor-intensive than depending on turnstiles.

For the most part, U.S. transit agencies haven’t caught on. New light rail lines and the increasing number of BRT routes often adopt proof-of-payment, but traditional buses, streetcars and commuter rail systems remain in the dark ages. The largest commuter railroads all employ massive fleets of conductors, with two or more on each train, checking everyone’s ticket, costing large amounts of money and heavily cutting into the number of trains that agencies can run on fixed budgets. Buses — the mode of choice for half of all transit trips in the U.S. — simply force everyone to line up at the driver’s door.

The exception is San Francisco. Without much postwar investment in intracity transit, the dense, still very transit-dependent city runs mostly on Muni’s buses and surface transit lines, with routes usually inherited from before World War II. The city’s only option to improve mobility is to strengthen and speed up the lines it already has, leading Muni to become the first major U.S. transit authority to commit to a proof-of-payment system for its entire network.

The transition away from kindergarten-style boarding started with San Francisco’s light rail lines in the 1990s, advancing to Muni’s buses in 2012. The agency started talking about it in 2008, but wanted to wait until it had ticket vending machines at stops on major bus routes to roll out proof-of-payment. This “was never going to happen,” Mario Tanev at the San Francisco Transit Riders Union told Next City, so in 2011 his group pushed Muni to move forward with a partial implementation. Within a year they got results. While those who want to pay the old way still can — in cash, at the front — Muni opened the back doors to legal and sanctioned boarding for anyone with Clipper card.

Muni hasn’t delivered on its promised evaluation of the first six months or shared exactly how much faster routes have become, but it did say in February 2013 that “all-door boarding” has sped up boarding by three or four seconds per stop on average. While not as fast as a full proof-of-payment system, that time saved at dozens of local stops surely adds up to a few minutes off many people’s rides.

San Francisco’s embrace of proof-of-payment and other efficiency measures has been slow, but the story in other U.S. cities isn’t so rosy. Take, for example, California’s other major metropolis. While Los Angeles has been building an impressive network of subways, light rail and bus rapid transit lines — and has proven more effective at it than most — it has not yet mastered the art of buses, which still carry the vast majority of its transit riders.

While L.A. has proof-of-payment on one BRT line, local politicians are not happy with the way Angelenos have avoided paying their fares. It’s been phased out on the subway and is even on the way out for light rail lines in favor of turnstiles, whose costs surely exceed the $5.5 million Metro said it lost each year due to fare evasion. Even on the BRT line in question (the Orange Line), two politicians asked Metro to study installing turnstiles at stations.

During two inspections earlier this year, 22 percent and 16 percent of Orange Line riders were found to have not paid their fares. While this is down from previous estimates, evasion rates in a properly implemented proof-of-payment system — for example, in San Francisco and German cities — are around 5 percent or less. The Orange Line’s troubles may be due to L.A.‘s rather toothless sanctions. Only 26 percent of those ticketed paid their fines within the 30 days required, according to an agency spokesperson. The worst punishment fare beaters can expect is getting banned from the system, which happens after you get three unpaid citations in one year.

Part of the difficulty in enforcing proof-of-payment fares is the strained relationship that U.S. city-dwellers, many of whom are ethnic minorities, have with police. In Germany and other European countries, failing to produce some sort of identification when caught results in police involvement if the fare inspector doesn’t believe you gave your true name and address. After a few violations in Germany, even if you pay the fines, you get hauled in front of a judge, who can slap you with a larger fine or even probation and community service hours.

But in progressive U.S. cities with lots of immigrants, no required identity cards and a history of overreach by the criminal justice system, involving the police and courts is unacceptable. Still, despite the lack of German-style enforcement, San Francisco managed to bring its fare evasion rate down to 3.5 percent.

Los Angeles’ transit authority has no plans to roll out proof-of-payment on the majority of buses operating outside its BRT service. Portland tried proof-of-payment in the 1980s, but gave up on it — perhaps because of lax enforcement combined with the relative lack of benefit for low-ridership suburban routes — and hasn’t looked back since. Boston has regressed, recently forbidding riders from even exiting its Green Line trains from the back doors, to prevent people from slipping in.

Tom Prendergast told Next City last year, right after he was installed as the head of New York’s MTA, that the authority would consider proof-of-payment on local and limited buses when it adopts a new, high-tech fare payment scheme — a project that’s been stalled for years and no longer seems like a priority now that its champion has left for Hong Kong. New York may have quite a number of bus lines busy enough to be full-fledged subways, but for the foreseeable future their hundreds of thousands of daily riders will waste a good portion of their lives waiting for everyone to board.

San Francisco does, however, offer some rays of hope, as the circumstances that led it to adopt all-door boarding may, someday, be repeated across the country.

One is the familiarity with proof-of-payment. Muni had used it on its light rail system for more than a decade, and many cities across the U.S. are building light rail or laying down new BRT systems with proof-of-payment ticketing. It’s possible that the MTA, for example, will see how much it has sped up SBS routes and apply it to others — or at least riders and advocates will see the benefits and demand that the MTA roll it out on all busy routes.

Another is simply growing ridership and a lack of money to build expensive new rail lines. As agencies are forced to do more with less, they may see the wisdom in efficiency-promoting measures like proof-of-payment, as Muni did.