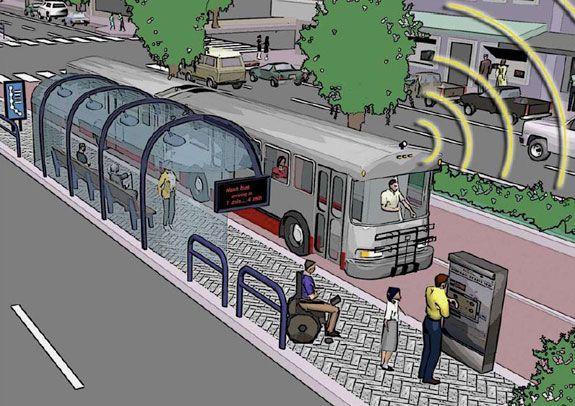 It’s mind-boggling that it took five years for a low-rent version of bus rapid transit to move from concept to reality, and it’s crazy that the MTA is highlighting this timeframe in their press materials. Five years is longer than a presidential term; the amount of time that’s passed since the start of the Great Recession; half a decade. The results are a dedicated bus lane with pre-board fare payment options and some multi-hued pavement. Imagine if the end result were actually transformative.

This process has taken so long because DOT and the MTA have been forced to hold meetings with virtually every single person who lives along the B44. Time and time again, business owners, residents and Community Boards have to offer input every time the plans change. This is no way to build a transit network, and it’s something that needs to be addressed. The mayoral candidates all believe buses are our future, but buses aren’t anyone’s future if it takes five years to get one line’s worth of improvements rolled out.

But on the left coast, along comes an enhanced bus project that makes New York look like a paragon of speed and efficiency: San Francisco’s Geary Boulevard BRT. A feasibility study was approved in 2007, and after some prodding by a local politician, the completion date has been accelerated to 2018. (Before Supervisor Eric Mar’s intervention, opening day wasn’t planned until 2020.) Environmental analysis, engineering and design will take up the bulk of the time, with two years planned for construction.

That’s 11 years from the feasibility study to the start of operation, or longer than planning and construction of the Channel Tunnel between the United Kingdom and France.

As on Nostrand Avenue, there were once plans to build a subway beneath the length of Geary Boulevard. Both streets easily have enough traffic for rail-based rapid transit, or at least light rail, but because of high tunneling and construction costs — and, in the case of San Francisco, some misplaced priorities — both have been reduced to enhanced bus service.

In San Francisco, a sales tax measure was passed in 2003 to provide for enhanced transit service on a number of key corridors, including Geary. But an anti-BRT campaign led to the county engaging in an onerous public education campaign. Merchants along Geary, for example, had a wildly inflated view of how many customers were arriving by car, leading them to fret about the loss of parking. While merchants thought that 54 percent of their customers arrived by car with the remainder coming by transit or on foot, the reality is that only 22 percent pulled up in automobiles.

“We in San Francisco have emphasized democratic process and community input above all other values in our planning culture,” Gabriel Metcalf, executive director of the San Francisco Planning and Urban Research Association (SPUR), said in a phone interview. “I’d say that’s our big cultural challenge. If you believe that we have a short window during which we need to radically ramp down carbon emissions, then these kinds of transit projects — that prove the only viable way to get people out of their cars — just cannot take this long.”

“I understand the frustration,” said Tilly Chang, executive director of the San Francisco County Transportation Authority, which is leading the project. “We are taking care with these first few projects,” she said, referencing a similar project on Van Ness Boulevard, another highly trafficked bus corridor that has proceeded at a similarly glacial pace. (Environmental studies that were expected to take two years in 2006 didn’t totally wrap up until this year.)

Bus rapid transit is still a new concept for San Francisco and most of the country, Chang said, and the public needed to learn about its benefits. Future projects, though, are expected to unfold more quickly. “The first ones are going to take a little longer,” she said.