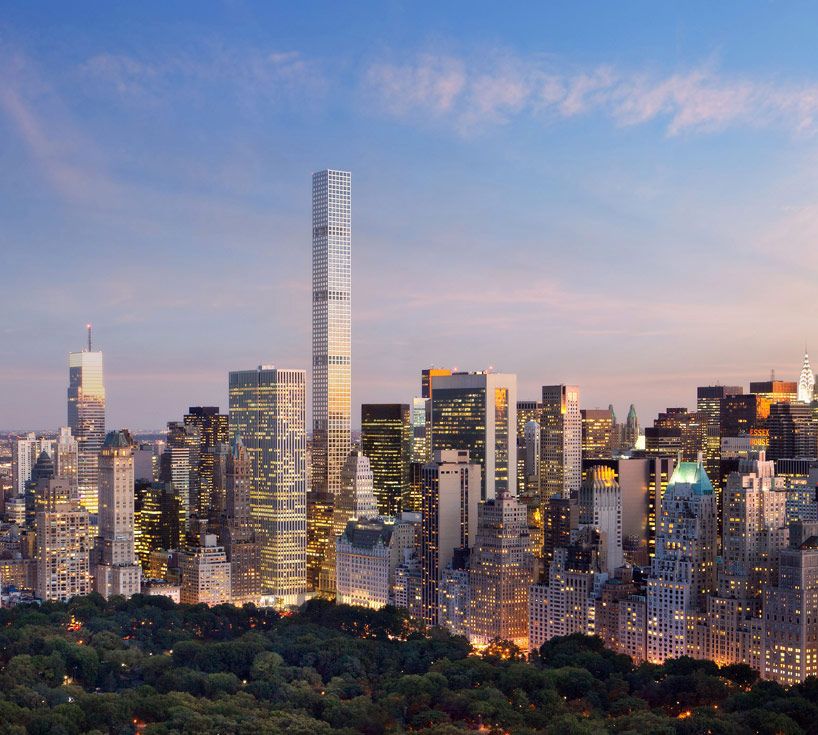 Since the invention of the steel frame and elevator enabled buildings to rise beyond six or seven stories, Manhattan has been at the forefront of skyscraper construction, first downtown and later in Midtown and beyond. And with building techniques that have allowed towers to rise from even skinnier bases, plus a global oligarch-centric real estate market that places a premium on views, a new crop of super-tall, super-skinny towers has begun to rise in Manhattan, massed just south of Central Park to take advantage of the sweeping green views, which command the highest prices on the island.

Tall towers are inevitably followed by misgivings about sunlight and shadows (“sunset comes to Park Avenue about two o’clock these days,” bemoaned the New Yorker back in 1929, as the now-beloved Terminal City was being developed around Grand Central), and the chorus of complaints has now reached a fever pitch with the Municipal Art Society and New York Times architecture critic Michael Kimmelman promoting new regulatory measures to stem the tide of super-tall towers.

The complaints are not new, with Warren St. John penning a piece for the Times earlier this year about shadows on the park and Jim Windolf writing another for Capital, implicitly endorsing some sort of height limit to prevent towers from casting long shadows, especially in the late afternoon during the fall, across Central Park. The idea of a hard height limit to prevent shadows is simple enough, and while normally this is the place where I’d argue that New York City is desperately short of housing and that any measure to prevent it from being built should be viewed with skepticism, the truth is that the super-tall residential towers in question are so skinny and provide so little housing (432 Park averages barely more than one condo per floor) that they wouldn’t really be missed from an overall supply point-of-view.

But there is another, less quantifiable benefit of super-tall towers: their aesthetic impact on the skyline. New York’s most breathtaking vista has always been its skyline, and even the most hardened NIMBYs will concede that the Empire State Chrysler Buildings shouldn’t be the pinnacle of skyscraping achievement. To that end, Michael Kimmelman proposes in his latest column not forbidding shadow-casting towers, but leaving them up to the discretion of a design commission, to evaluate the worthiness of very tall additions to Manhattan’s skyline:

The city should put a limit on air rights that can be merged without public review. Exceptional height should be earned, not just bought. Let community groups and city agencies weigh in. Developers will raise hell, but the move would not stop sky-high buildings from going up. Buildings striving for such height would just need to make a case for themselves aesthetically and otherwise. Developers might also give something back for the profits reaped as they leverage public assets like parks. They could pony up for affordable housing and improved transit.

Kimmelman does acknowledge the difficulty of regulating something as fleeting as aesthetic taste (“Almost everybody hated the Chrysler Building at first”), but ultimately comes down on the need for greater public review.

But review of what? Aesthetics, affordable housing, infrastructure – to which City Council would surely add union status (hotels requiring Council approval much be unionized) – make for an unwieldy combination of criteria (it also makes you wonder why a tall, skinny tower should be subject to more demands for affordable housing, infrastructure and unionization than a building with similar square footage that doesn’t pierce a sensitive part of the skyline). While some cities manage to thread the needle while still allowing for significant amounts of growth (Toronto, for example, where “as-of-right” development not requiring government approval is nearly nonexistent), New York City bodies with even more narrowly-targeted goals struggle to find the right balance.

The most obvious example of such a body is the Landmarks Preservation Commission, with jurisdiction over alterations to existing (designated) historic buildings and any new structures in landmarked districts. Legally, the LPC is supposed to focus only on design and integration into historic neighborhoods, and is not allowed to regulate or limit the height and bulk of buildings. But in practice, the LPC’s primary goal appears to be limiting the density of structures within its purview, with little lenience towards buildings of exceptional design. How else to explain the commission’s relentless chopping of local architect Morris Adjmi’s stylish 837 Washington Street in the Meatpacking District? The torqued tower (if it can even be called a tower) was proposed at eight stories, but chopped down to six – nevermind that the base of the building has no pre-war or historic details, and that there is a building three times the originally-proposed height directly across the street.

And then there was chief city planner Amanda Burden’s decision to cut 200 feet from Jean Nouvel’s Tower Verre next to the Museum of Modern Art. At the time, the City Planning Commission explained the decision thusly:

…the commission believes that the applicant has not made a convincing argument that the design of the tower’s top, with the uppermost 200 feet of the building, merits being in the zone of the Empire State Building’s iconic spire, making the building the second tallest building in New York City.

The decision was heavily criticized (including by Kimmelman’s predecessor at the Times) by the architectural cognoscenti at the time, and in retrospect seems even sillier, given that Tower Verre is the most anticipated addition to the city’s skyline in years, and that less distinguished as-of-right towers will now be rising hundreds of feet taller than the MoMA tower’s 1,250-foot-tall top.

Kimmelman doesn’t universally condemn the tall towers rising primarily on 57th Street, singling out two as not-horrible (“isn’t always tragic” and “may not end badly”): 111 West 57th Street, designed by SHoP and built by JDS, and Harry Macklowe and CIM’s 432 Park Avenue, designed by Rafael Viñoly. The SHoP tower has yet to rise, so it’s hard to say how it will turn out, but it’s worth mentioning that before the glass was laid on the first two towers to pierce the skyline from Central Park – One57 by Christian Portzamparc (which Kimmelman criticizes as “chintzily embellished, clad in acres of eye-shadow-blue glass offset by a pox of tinted panes, like age spots”), and Viñoly’s aforementioned 432 Park – it was One57 that was seen as the starchitectural wonder, and 432 Park that was supposed to be just a boring heap of blocks. (There’s also the risk that a design panel would default to London’s way of determining the worthiness of new towers: how famous is the architect? But as Portzamparc has shown with One57 in Manhattan and Viñoly showed with his dreadful Walkie-Talkie tower in London, fame is not always a guarantee of good taste.)

New York City has never had much public review over its new development, whether it was during its unzoned years (pre-1916), its lightly zoned years (1916-1961), or its air rights years (from 1961 onward). Which is not to say that it could never work. But before embracing it for every tall new tower, shouldn’t we at least make sure that bodies like the Landmarks Preservation and City Planning Commissions do a better job of regulating the small slice of the skyline they already have control over?