The Missing Link in Seattle’s Streetcar System – Next City 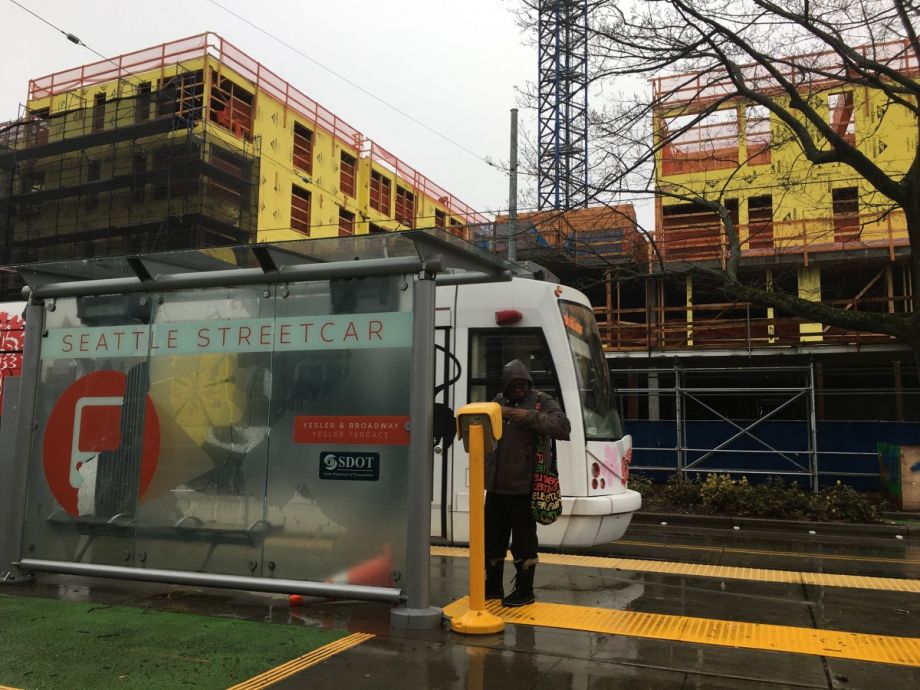 A Seattle Streetcar stop along the First Hill line, with Yesler Terrace under redevelopment in the background. (Photo by Gregory Scruggs)

On a typically rainy Tuesday morning, a group of commuters huddled under a glass shelter along a median in a traffic-calmed street, waiting for the Seattle Streetcar’s First Hill line. Among them was a physician’s assistant, who expressed her disappointment at Mayor Jenny Durkan’s decision late last month to pause further construction on a downtown streetcar extension.

“It’s really too bad because this is so much more efficient and cleaner,” says Susan, who asked that her last name not be used because she was not authorized by her employer, a local hospital, to speak to the media. “It’s always full, people love it, and I would hate to see it downsized in any way.”

The 2.5 mile-long First Hill line opened in 2016, connecting neighborhoods on the edge of downtown like Pioneer Square and Chinatown to Capitol Hill, the city’s densest residential neighborhood, via a major cluster of hospitals on First Hill. But, like a metaphor for a divided city, it does not connect with the 1.3 mile-long South Lake Union line, which opened in 2007 and serves the Amazon campus.

The two lines combined averaged between 4,000 and 5,000 daily riders in 2017, according to a Seattle Department of Transportation database.

A proposed extension, called the Center City Connector, would connect the two lines, and also serve key downtown destinations like the ferry terminal, Pike Place Market, and the Seattle Art Museum. The transportation department projected the extension would nearly quintuple daily streetcar ridership to between 20,000 and 24,000.

The project broke ground earlier this year, but ground to a halt on March 30. The mayor cited a cost discrepancy between the Seattle Department of Transportation and King County Metro, the transit agency that operates the streetcar. In an internal memo, the agency suggested that operating the expanded network would cost 50 percent more than what the department claimed publicly, because of higher staffing needs. The city indicated it will conduct an independent review of the streetcar project, which itself could add millions to the final cost.

The consequences of delaying the expansion worry transit activists like Seattle Subway, a grassroots group that was instrumental in the voter-approved passage of a landmark $54 billion regional transit package in 2016.

In a petition to the mayor, Seattle Subway notes that the federal government has already allocated $75 million to the Seattle Streetcar, money that can’t be redistributed to some other transit project, and that turning down the funds may jeopardize a host of other regional transportation infrastructure priorities currently on the table with the Federal Transit Administration. It’s happened before: when Seattle voters turned down federal dollars for a mass transit system in the 1960s and ’70s, the funds ultimately went to Atlanta, a decision many see as the original sin of greater Seattle’s woefully inadequate public transportation network.

“The Center City Connector will be easy-to-understand, street-level transit that will create a rapid connection between major tourist destinations and small, minority-owned businesses in the International District,” says Keith Kyle, executive director of Seattle Subway. “[The extension will also] create a permanent transit link between the city’s largest public housing complex, Yesler Terrace, and downtown Seattle, the largest job center in the Northwest.”

Yesler Terrace, the first racially integrated public housing complex in the U.S. when it opened in 1941, is currently undergoing a complete redevelopment, transforming from two-story tract housing to dense high-rises, with the First Hill line running right through the center.

The Seattle Department of Transportation has an explicit racial equity and social justice policy supposedly guiding its transportation decisions. A department spokesperson did not answer whether halting expansion of the streetcar ran afoul of those policies, but did say, “Existing streetcar lines connect to local and regional buses rail lines that provide access to, from, and through Seattle.”

Meanwhile, Amazon has subsidized the South Lake Union line to the tune of millions of dollars. The Urbanist, another advocacy group, called on the tech giant to plug the fiscal gap for the Center City Connector. An Amazon spokesperson declined to comment on the proposal, but did confirm Amazon’s purchase of an additional streetcar and a decade’s worth of operations payments.

The mayor’s streetcar decision was the first in a flurry of mobility moves over the last two weeks as Seattle prepares for a so-called “period of maximum constraint” from this year through 2021, after a waterfront viaduct is demolished and buses are kicked out of the downtown transit tunnel, but before the light rail system extends to a major hub in north Seattle. After putting the pause on the streetcar, the mayor floated congestion pricing as a viable option but then also pushed back a promised downtown protected bike lane by two years.

The dizzying pace of decisions has left some transit activists’ heads spinning, like Beau Morton of the Transit Riders Union, which advocated for the city’s low-income transit fare.

“While Transit Riders Union members are divided on the streetcar, personally I think this is a pretty concerning development and just one among several delays and cancellations of transit and bike projects that has me wondering what exactly is going on with Move Seattle [a voter-approved transportation levy] and [the Seattle Department of Transportation],” Morton says.