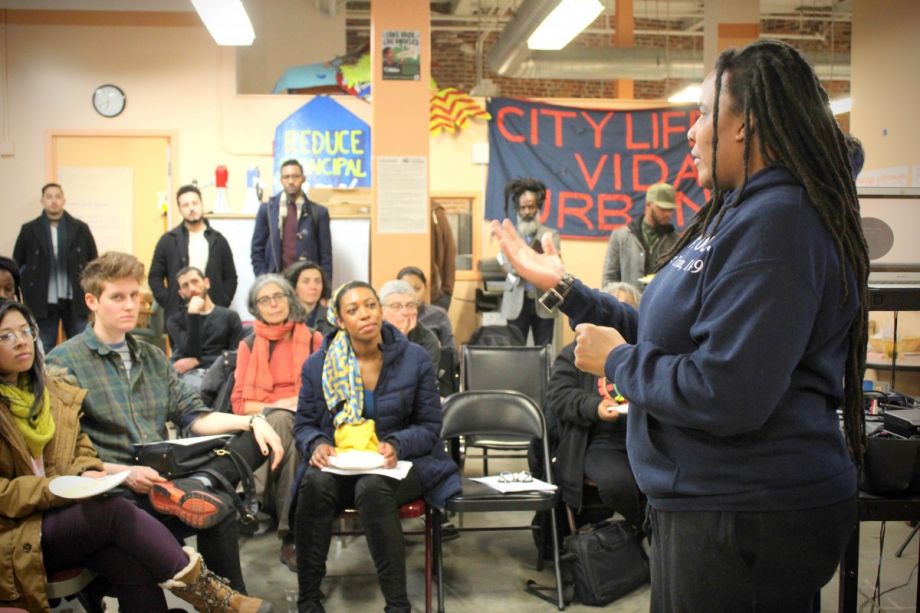 Nia Evans, director of the Boston Ujima Project, talks with Ujima members and supporters about how to become investors in the Ujima Fund on the evening of the fund's official launch. The gathering took place at the headquarters of housing justice organization City Life/Vida Urbana, in Boston. (Photo by Sarah Jacqz)

The median net worth for black households in Boston is $8, compared with $247,500 for white households, according to a study published by the Federal Reserve Bank of Boston. The disparity is so great that when the Boston Globe published an investigation into how it got to be that way, people thought the number was a typo.

Racial wealth inequality is a key challenge for cities and city planners, given how public housing policies, zoning, racial covenants in the real estate industry and other policies or tactics have historically segregated neighborhoods by race. Two-thirds of Boston’s black population today can be found in just three neighborhoods — Roxbury, Dorchester and Mattapan. New research now provides evidence that, even controlling for the quality of housing stock, the blacker the neighborhood the lower the home values — and therefore net worth — for black households and others in those same neighborhoods.

As author and law professor Mehrsa Baradaran hammers home in her book, “The Color Of Money,” expecting black communities to close the racial wealth gap all by themselves is folly at best, and a strategy employed to perpetuate the status quo at worst. But simply pouring more money into black neighborhoods won’t do much good if those dollars end up going to projects or businesses that displace black people — as was the case during the heyday of “Urban Renewal,” and as many fear will happen now because of Opportunity Zones, the new tax incentive for making investments in (supposedly) economically distressed areas.

A new alternative to bring capital into black and working-class communities recently arrived in Boston. After a few years of planning, piloting and incubating, the Ujima Fund finally opened its coffers to receive investment in early December 2018, setting a goal to raise $5 million in capital. Residents of the state of Massachusetts may — online, in person or by mail — invest as little as $50 in the Ujima Fund, while others, depending on the state in which they live, may invest as little as $1,000 or $5,000. The fund plans to focus its early investments on small businesses, and later add some commercial and community real estate projects to its portfolio.

In some ways the Ujima Fund is similar to angel investor funds or even larger venture capital funds and private equity funds, in that it will combine capital from multiple investors and turn around to make investments in multiple businesses or projects. Boston is no stranger to those kinds of funds; after California, Massachusetts narrowly beat New York as the state with the second-most venture capital investment in the first three months of 2018.

The big difference is in how the Ujima Fund will make investment decisions. Rather than a typical closed-door process involving only professional money managers, entrepreneurs and high-powered boards of directors, the Ujima Fund will use a democratic process with approval power vested in the voting members of the Boston Ujima Project. There are currently around 250 voting members, all of whom must identify as “working class and/or as a person of color,” with many coming from Roxbury, Dorchester and Mattapan.

To receive investment from the Ujima Fund, eligible businesses must receive at least a 51 percent vote in the affirmative from voting members of the Boston Ujima Project. At least 51 percent of voting members must be present for quorum to allow a vote to take place. An investment committee, consisting of volunteers with experience in investing and raising capital, works with eligible businesses in advance of a vote to determine financial capability and management capacity.

Over the past year or so since the Boston Ujima Project’s launch event, members have had a chance to review, tweak and approve almost everything there is about the Ujima Fund, from the interest investors will receive (and therefore what they will charge borrowers) to the standards for eligible businesses to receive investment — there are 36 standards, covering everything from executive pay (no staff may be paid more than 5 times the lowest paid employee) to having fair workweek policies to being at least 50 percent minority-owned and employing at least 60 percent minority employees.

“We hope to see a lot of hiring happening in Dorchester, Roxbury and Mattapan as a result of both our investment and new contracts from anchor institutions,” says Lucas Turner-Owens, the fund manager at Boston Ujima Project.

Turner-Owens cites the project’s desire to address the fact that out of 2.5 million black-owned businesses, 96 percent are sole proprietorships with zero employees besides the owner, compared with 81 percent of businesses overall.

To become eligible for investment, businesses must also become members of the Ujima Business Alliance, which meets monthly to discuss ways to support each other. This includes purchasing from each other whenever possible — for example, several alliance members are in the food industry, and one is in compost collection.

For the Boston Ujima Project, the democratic investment process is more than just a decision-making procedure — it’s also a risk-mitigation strategy. The project is counting on voting members and investors to patronize those businesses as well as becoming advocates and word-of-mouth marketers to others in the neighborhood and the city. The Boston Ujima Project’s grassroots partners in the housing justice, civil rights and labor movements have pledged to advocate for larger institutions — hospitals, universities, city agencies — to purchase from alliance members. It’s all a part of the pitch to investors.

“We believe that by acting as an advocate on behalf of the business alliance, and building relationships with large anchor institutions, we are de-risking our investments,” says Turner-Owens.

Given the state of black household wealth in Boston, the Ujima Fund expects to raise only $500,000 from residents of Roxbury, Dorchester, Mattapan and other working-class communities of Boston or Massachusetts more broadly. The rest of the $5 million it expects to raise from outside investors who fully understand and buy in to the democratic investment decision-making process that the Boston Ujima Project has set up.

Other potential investors aren’t more than a few degrees of separation away. Equal Exchange, based outside of Boston, has more than 600 outside investors who own $16 million in shares of the $70 million-per-year food company whose majority shareholders are its workers. Daniel Fireside, who manages investor relations at Equal Exchange, helped CERO Co-Op — a founding member of the Ujima Business Alliance — to raise startup capital.

Turner-Owens has also been in talks with groups such as Resource Generation, a multi-racial network of high net-worth millennials that says it’s “committed to the equitable distribution of wealth, land, and power.”

It’s the smallest investors, however, that matter the most to Turner-Owens, who grew up in Mattapan and now lives in Dorchester.

“I think there’s a qualitative impact as well, in terms of agency,” he says. “Hopefully an Ujima investor who’s a resident of these neighborhoods, after investing and visiting one of the businesses, leaves feeling like they directly controlled the direction of that institution, [and] therefore could have a similar impact at a hospital, or a bank, or at a university.”