Taking Steps Toward a Community-Controlled Economy in Boston – Next City

Taking Steps Toward a Community-Controlled Economy in Boston 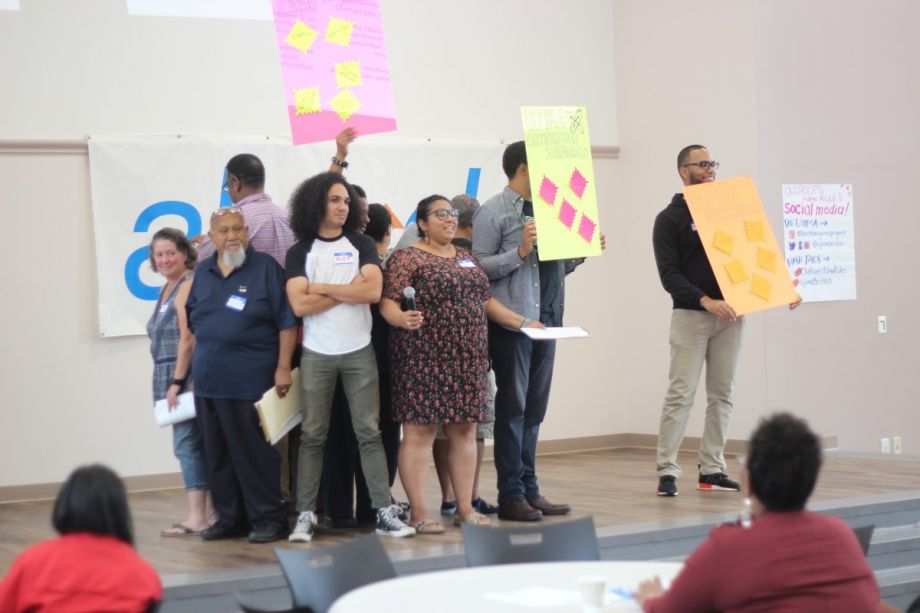 Members of the Ujima Community Standards Committee gather on stage before members vote on new standards. (Photo by Tyreik Prentice)

A diverse group of about 90 participants roamed the large main hall of the Thelma D. Burns building in Boston’s Dorchester neighborhood and, armed with sticky-notes and markers, took some of the first key steps toward building their vision of a community-controlled economy.

Coming from Boston’s predominantly working-class communities of color, they were there over the course of a weekend this October, as members of the Boston Ujima Project, to discuss and approve criteria for businesses seeking investments from the project’s community-controlled capital fund — a centerpiece of their collective vision.

The sprawling three-day gathering comprised some 20 hours of workshops, skits, discussions and voting, an evening party and a day of exploring community-friendly activities in Boston. The event was the movement’s first citywide assembly since its founding assembly in Fall 2017.

Over the past year, three neighborhood-specific assemblies drew local residents to contribute ideas on how Ujima’s collective resources might best be directed locally. The neighborhood gatherings generated long lists of well-regarded existing businesses in the Roxbury, Mattapan and Dorchester neighborhoods and citywide, along with lists of perceived neighborhood needs, from art spaces to cafes to land trusts.

The new standards are informed by realities like Boston’s racial wealth disparity — Boston’s median net worth among white households is $247,500, compared with just $8 in median net worth among black households, according to a study by the Federal Reserve Bank of Boston. With that in mind, Ujima members voted for standards such as: For multi-person business partnerships, at least 50 percent is owned by a person of color; for nonprofits seeking capital, people of color make up the majority of the board.

Approved standards also include making a commitment to a non-toxic workplace policy, committing to a feasibility study of employee ownership, and pledging to review opportunities to shift to Ujima vendors and contractors. One hundred percent of employees must be paid minimum wage or higher — which means no dual-tier wage system for restaurant servers or other tipped employees — and no staff member can be paid more than five times what the lowest-paid employee earns.

“We recognize these are not easy,” she says. “They are intended to be rigorous, but not prohibitive. We don’t want to create additional barriers, but I appreciate that they provide an exposure to different standards.”

Day one of the assembly was devoted to workshops on such topics as how to run the Ujima community capital fund so that it treats borrowers well and also generates a return to investors.

The community capital fund, expected to launch before year’s end, is a major piece of the Ujima Project plan. Investments small and large will come from community stakeholders as well as willing outside investors, and accumulated funds will be allocated by a democratic member process to support local businesses, artists and organizations.

Lucas Turner-Owens, Ujima’s fund manager, opened the investment fund workshop with two questions: “What does traditional lending look like, and how can Ujima be different?”

A series of skits showed barriers faced by small business borrowers — particularly people of color, women and immigrants — including discrimination, lack of or poor credit history, and lender inflexibility in the face of up-and-down revenue cycles. “No collateral, no deal,” said the fictitious banker character, dismissing a loan request by a green cleaning company.

“We’re trying to change the way to assess whether people can pay a loan back,” Turner-Owens says.

Workshop participants wrestled with tricky questions of what, if anything, Ujima should require as collateral and how Ujima might assess credit-worthiness in alternative ways. Some ideas emerged, including valuing an entrepreneur’s sweat equity and community involvement, granting flexibility on missed payments due to revenue fluctuation, and asking large anchor institutions to put up loan guarantees.

In a vote the next day, members rejected any absolute requirement of collateral. They also indicated that if collateral is necessary, it should be in the form of future business assets, not personal assets. A consensus emerged that affordable capital for borrowers is a higher priority than high returns to investors. The Ujima investment committee will use information from the vote and the workshop discussions as it mulls final fund terms.

“That’s the goal of these conversations,” Turner-Owens says. “We want folks to empathize with business owners as well as think of their own interests as investors. We’re focused on calibrating the balance. Normally, you have investors thinking about their returns, while completely removed from the borrowers.”

Turner-Owens said Ujima plans to prioritize community investors. For instance, if there is a loan default rate higher than the 20 percent for which Ujima is prepared, community investors would be paid back first, followed by “accredited investors” (the term from the U.S. Securities and Exchange Commission for those who have incomes above $200,000 or non-home assets above $1 million) and foundations. “This is not traditional,” Turner-Owens notes. “Most funds reward folks with the most wealth and who invest longer.”

The weekend also marked the launch of the Ujima Boston TimeBank, providing a mechanism for members to trade skills and labor with others in an hour-to-hour exchange.

“It’s about valuing time, rather than only money,” says Charles Wallace-Thomas, a volunteer who serves on the team organizing the TimeBank. “Your hours in the bank are determined by the services you perform [for others].”

Not all has gone as planned. As of last Fall, the Ujima Project expected to launch the community capital fund in 2017 and start distributing funds in early 2018, but the process has taken longer.

“We’ve had to do a lot of due diligence, making sure what we wanted to do was in compliance,” Evans says. “We had to talk with a lot of lawyers. That has taken longer than we expected.”

Now, the final offering memorandum is “around the corner,” she says, and the fund is slated to be open for investing before the end of this year.

Open, transparent, collective decision-making can be an arduous process, and a mission to create an alternative economy is no simple task, to put it lightly. Evans ticks off a few of Ujima’s challenges going forward: figuring out how to include the voices of members who can’t attend in-person events, how to build fundraising while remaining accountable to members, and how to shift the organization over time so members are owners, operating with less direction from staff leaders.

“Ujima is trying to model different ways of transacting and relating with one another,” Evans says. “The assembly is an opportunity to experience this in real time, to come together and say, ‘What businesses do we want to support? What needs does our community have? How should businesses and the community be interacting with each other? How will we hold businesses accountable?’ It’s moving from abstract understanding to feeling what it’s actually like to do this.”