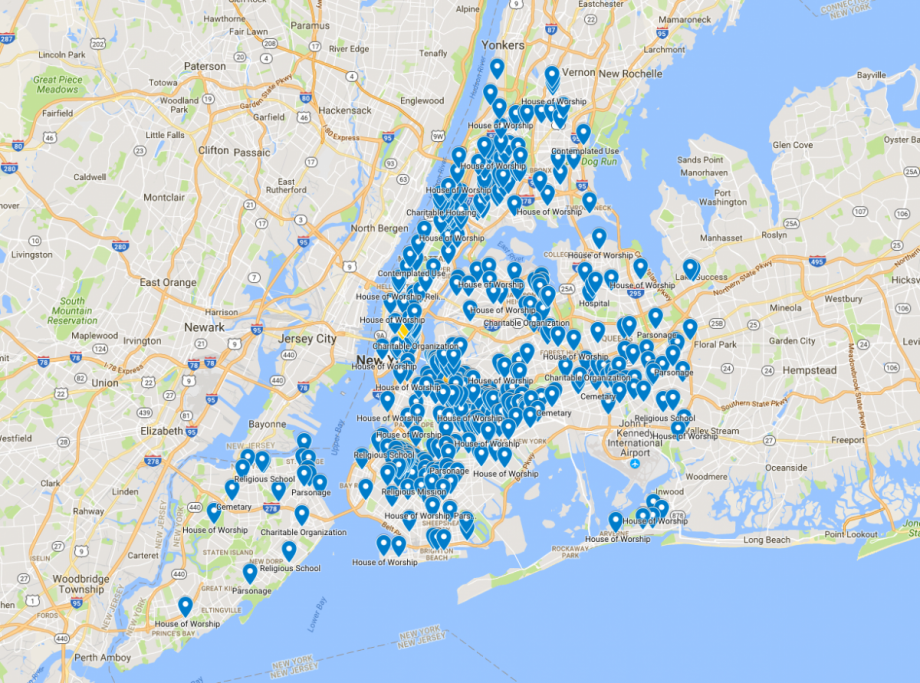 The Al-Muneer Foundation is a mosque and community center in Jamaica, Queens, at 195th and Hillside Avenue. The nonprofit bought the property in March 2010. It used to be a doctor’s office.

By New York state law Al-Muneer, like all registered nonprofits, is exempt from paying property taxes, but the local NYC Department of Finance (DOF) actually grants property tax exemptions. After applying, getting denied once, and appealing, Al-Muneer had its property tax exemption denied again. The city eventually told them it was because the property they bought was not designated for charitable use by the Department of Buildings. Over the past few years, Al-Muneer paid some property tax bills when it could, but not all of them. If and when the city ever granted the exemption, it would be retroactive to the date of purchase anyway, entitling them to forgiveness of any debt owed and a refund of any property taxes paid.

Last year, in its annual tax lien sale, the city sold Al-Muneer’s unpaid property tax debt to an investor consortium, which quickly initiated foreclosure proceedings. Like many cities, NYC regularly sells unpaid debts to investors in order to recover some of the funds owed. Investors then “work” with property owners — often by initiating foreclosure or forcing a sale — to settle the remaining debt.

Al-Muneer fought back against the foreclosure, and won. The city finally granted a property tax exemption in November 2016. The organization still has to apply to get its property tax payments refunded, but the threat of displacement is gone for now.

This year, hundreds more properties owned by nonprofits are once again caught up in this year’s NYC property tax lien sale, which includes properties that are delinquent on water bills in addition to property taxes.

The 2017 tax lien sale didn’t have to happen. City council voted to reauthorize the sales, 50-1, in December. In the reauthorization, opponents of the tax lien sales did get several concessions from the city. Limited-equity cooperatives, which house thousands of low-income households, were removed from the process. Also, starting this year, the city will publish lists of vacant lots and all properties owned by nonprofits in the annual tax lien sales.

For the 2017 sale, the city last month officially listed 536 properties owned by nonprofits, including houses of worship, hospitals, community centers, schools and more. Those organizations have until May 11 to file the necessary paperwork to get a property tax exemption, which would remove them from this year’s sale. Since the list came out, 69 properties owned by nonprofits have been removed from the tax lien sale.

A 2012 change by the city is part of the reason so many nonprofits are at risk of losing their properties today. Prior to that, nonprofits could apply for and hold permanent property tax exemptions from the Department of Finance. But citing compliance issues, the city reformed the system and started requiring nonprofits to file annually for renewal. Hundreds, if not thousands of NYC nonprofits today are still surprised to find out they have lost property tax exemptions that have been in place for a generation or more, according to Paula Segal, senior staff attorney for the Community Development Project at the Urban Justice Center (UJC) and founding director of 596 Acres, a community land access advocacy group.

Many nonprofits, like Grace Baptist Church in Brooklyn, end up selling their properties to settle debt purchased by investors, as reported in Urban Omnibus.

For right now, the most the coalition can do is to identify the nonprofits on the tax lien sales list (the city doesn’t name the owner or organization for each property), and notify them, one by one, about what’s about to happen.

“We grassroots organizations, elected advocates and residents are doing our best to keep up with the speculators who use the lien sale lists as a guide to easy targets,” Segal says. “We are trying to fan out across the city and let people know that the liens are not inevitable, that they can work with DOF to resolve the arrears. But it’s a lot.”