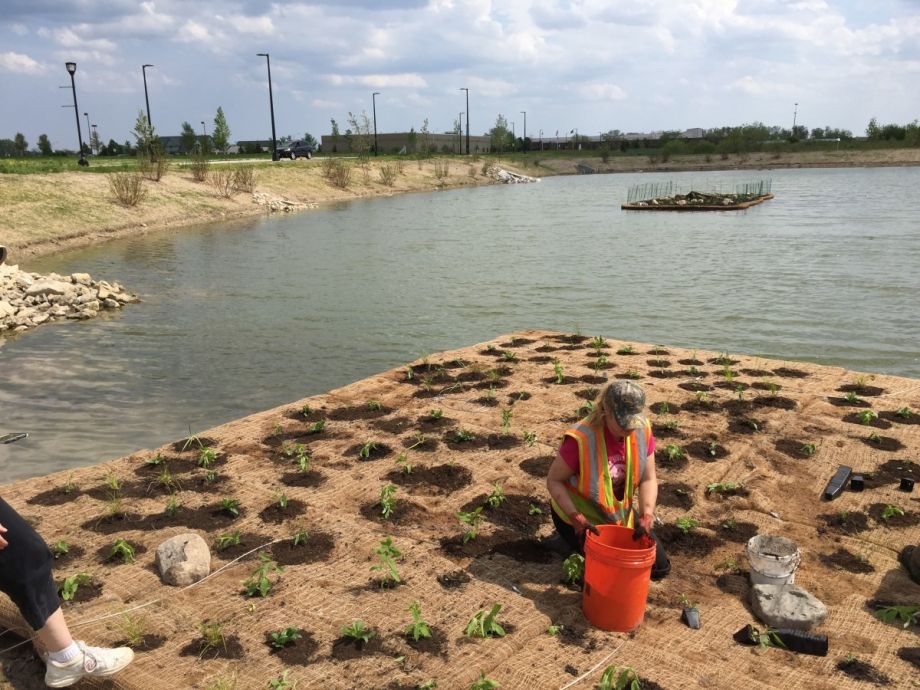 Three small islands floating in a pond in Oak Creek, Wisconsin, might draw sunbathing turtles and migrating monarchs, but their real appeal is the work being done by microbes below the surface. The artificial islands, installed in mid-May, are tethered to the bottom of a stormwater retention pond in Drexel Town Square, a new 85-acre development in this Milwaukee suburb. Permeable pavement, bioswales, a detention basin, natural wetlands and a series of stormwater ponds ensure that the site has the capacity to capture and filter almost all of the rain expected to fall on the site during a 100-year storm event, according to the stormwater ponds’ designer, Ron Londre.

The artificial islands contribute to filtration by providing habitat for native plants, which can help cleanse stormwater of nutrients and other pollutants. As stormwater washes off impermeable surfaces, it picks up nitrogen and phosphorous, which cause algae to grow at rates that make the water an untenable habitat for other aquatic life. Plant roots can draw up some of those nutrients, and certain microbes and bacteria digest them. The islands, designed to mimic natural bogs and wetlands, are drilled with holes for native plants, which will push their roots through the mat to dangle in the water in about two weeks. Because of their woven structure, the mats also encourage the proliferation of healthy microbes.

“The plants will grow, pull up obviously phosphorous and nitrogen,” says Autumn Boos, director of marketing at Midwest Floating Island, the St. Paul-based company that supplied the mats. “But what’s important is actually what’s going on in and under the island.”

The islands themselves are made up of two layers of recycled PET plastic, the kind that makes up soda and water bottles, wrapped in coconut husks to prevent erosion. The plastic has been shredded and re-tooled to resemble the texture of a pot-scrubber, providing ample surface for microbes. “If you think about it, we’re keeping water bottles out of the landfill and turning them into a way to clean the water,” says Boos.

Known commercially as Biohaven floating treatment wetlands, thousands of mats have been installed in the U.S., Australia, New Zealand, Canada, China and other countries. They’ve been used to create a fish habitat in the Milwaukee River. One off the California coast is an acre in size, designed to create new habitat for terns. The three islands in Oak Creek are far smaller, ranging from 425 to 455 square feet. They’ve been planted with a variety of native plants, including sedges and rushes, blue flag iris, and swamp milkweed, a welcome habitat for monarchs. A $65,000 grant from the Fund for Lake Michigan paid for their purchase and installation.

All of this, the islands and the retention ponds, are part of an effort to capture and treat as much of the stormwater that falls on Drexel Town Center as possible. A former aeronautics manufacturing facility, the 85-acre site has been under redevelopment since 2011 as a new Main Street for Oak Creek, which has never had much of a downtown, says Londre. A new city hall and public library have already opened, as have several retail businesses, including a brewery. Residential development and more retail are underway.

The city “took that opportunity to put in a lot of green infrastructure,” says Londre, an ecologist with TRC Environmental Corp. He designed the series of stormwater ponds that empty into an 8-acre wetland on the development’s western edge. The three islands are tethered to the bottom of the first pond, where the bulk of pollutants washing off Drexel Town Square will end up first before filtering into the marshes and wetlands.

Londre says the islands were a good fit for the project because they were a bit of an afterthought. The stormwater ponds had already been designed, but not yet constructed, so the islands presented an opportunity to add another eco-benefit without changing the plans. Boos says that’s one of the product’s greatest appeals. “I think why these are so great for stormwater ponds is because they can be easily retrofitted after the ponds are already in,” says Boos.

They’re also custom made for every project. Mat size will vary depending on the warmth of the water, the amount of circulation, and the size of the pond. “Plus they’re just aesthetically appealing, too,” says Londre. They even provide habitat for beleaguered pollinators. “It’s just another opportunity to find a space to add wildlife habitat in a feature that’s otherwise used to manage stormwater.”