New Houston Flood Czar Wants Everyone to Remember the Storm 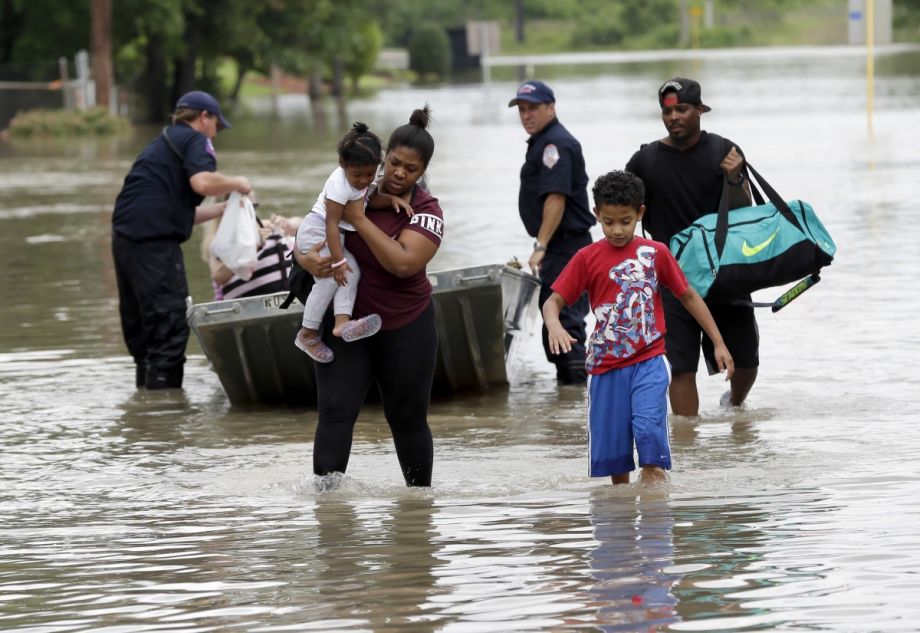 A family is evacuated from their Houston apartment building in April. (AP Photo/David J. Phillip)

Last month, Houston Mayor Sylvester Turner had to postpone his first State of the City address, which was scheduled to include the appointment of the city’s first flood czar — on account of historic and catastrophic flooding. The “Tax Day” flood that struck on April 18 was the second hundred-year event to affect the city in less than 12 months, flooding about 2,000 homes and causing the deaths of at least eight people. That crisis threw Houston’s stormwater management weaknesses into stark relief, but they weren’t news to Stephen Costello, a former at-large Houston council member and an engineer who has worked on stormwater management his entire professional career. Turner appointed him to be chief resilience officer earlier this month, but because the mayor wants to launch his position with a focus on flooding and drainage, Costello’s been cast as the “flood czar” for now.

“Flooding has a tendency of people forgetting very quickly,” says Costello. “The simple fact that we had two pretty severe floods less than 12 months apart, that were non-tropical related, which means they weren’t related to any hurricane, tended to get everyone’s attention that this is a real issue and it’s not going to go away.”

Houston’s flood risk is impacted by a number of factors: It’s a flat region experiencing rapid development in an area with naturally impervious soils, vulnerable to storms of increasing ferocity. Overall, climate predictions for Texas estimate the state will become hotter and drier by the end of the century, but the storms that do come may intensify. Already, the state climatologist’s records show that since 1986 there’s been a significant increase in the number of years Harris County has experienced 8 inches of rainfall or more in a single event. The Tax Day storm beat the Houston record: 9.92 inches in a single day.

Rainfall, of course, is not the same as flooding. The city has many tools at its disposal to deal with stormwater more effectively. Costello says one of the biggest roadblocks to addressing those weaknesses to date has been a lack of coordination among multiple agencies responsible for flooding and drainage. The city of Houston is in charge of neighborhood drainage, creating the systems that will convey water to the network of 10 bayous that traverse the city. Then a sister organization, Harris County Flood Control District, is responsible for conveying the water, via the bayous, out to the Gulf of Mexico.

“We try to collectively work together yet we have distinctly different responsibilities,” Costello says. A major part of his role will be to coordinate efforts of the city and the flood control district, plus other entities whose work bears on stormwater and drainage, like public street paving and private development.

Houston developers are required to mitigate for the stormwater impacts of their projects, which cannot increase or redirect water to adjacent properties. Where public drainage is considered adequate, they can route stormwater into the public right-of-way. Where it isn’t, developers are required to use detention basins and green stormwater infrastructure to deal with stormwater onsite. But the Houston Chronicle has questioned whether developers are actually fulfilling their obligation, and many critics in the city, which is infamous for its lack of zoning, have blamed rampant development of wetlands and other natural areas for worsening floods. Even where developers did build retention ponds, the Chronicle notes, they just aren’t as effective as the green spaces they replaced.

“We’ve expanded the flood plain by building on some of our biggest natural sponges,” says Jaime González, community conservation director at the Katy Prairie Conservancy, a nonprofit land trust working to preserve the habitat and ecosystem benefits of the Katy Prairie, just northwest of Houston. He’s concerned that the development impeding on this natural area is making flooding in the city worse. “If we stopped developing completely on the Katy Prairie tomorrow it wouldn’t solve all of our problems, that’s for sure,” says González. “[But] the Katy Prairie and natural landscapes in general really do help to mitigate the flooding damage.”

From his perspective, these recent flooding events are going to “necessitate us revisiting our notion of growth and development,” looking to infill the already urban areas rather than spraying subdivisions across currently open spaces. For his part, Costello says he understands why residents believe development is to blame for increased flooding, but he “[doesn’t] necessarily agree with that.” As flood czar, he says he will reevaluate development standards, though, particularly for redevelopment.

He may also look to change the way Houston distributes funding for drainage improvements. “What we’re going to have to do is take a look at where the severe flood plain areas are and see if there’s a better way to reallocate resources,” he says. Every year, when preparing the capital improvements budget, the city council distributes funds evenly for the city’s 11 districts. “Maybe we need to take a different view of that, and if we have several districts that have severe repetitive flooding, maybe we need to take a look at allocating more resources directly to those areas.”

Many areas that flooded over Memorial Day weekend 2015 also flooded this Tax Day. One neighborhood along a bayou — which is being improved for greater capacity through a federal project — was flooded by waters overtopping that bayou. The improvements to Brays Bayou softened the blow, but that project should have been done years ago, says Costello, but because the costs are being split 50-50 local and federal, and because the local sponsor is getting repaid by the feds on reimbursable contracts, the project has been done in stages and continuously delayed.

But the bayous have a lot of potential to help. The Bayou Greenways Project has been envisioned as a way to improve stormwater retention, while also creating more open space and an improved active transportation network. A number of ongoing city and county projects also include creating regional basins, what Costello calls “open excavated areas.” They’ll be dual use basins: soccer fields, baseball diamonds and parks when it’s dry, holding ponds when it isn’t. When they’ll be completed is a funding issue, he says.

But past experience suggests, if possible, now is the time to act. Both on actual improvements, and on communication with the public, another facet of Costello’s job. “We have to just not let the moment slip,” says González. “People’s memories are fairly short.”