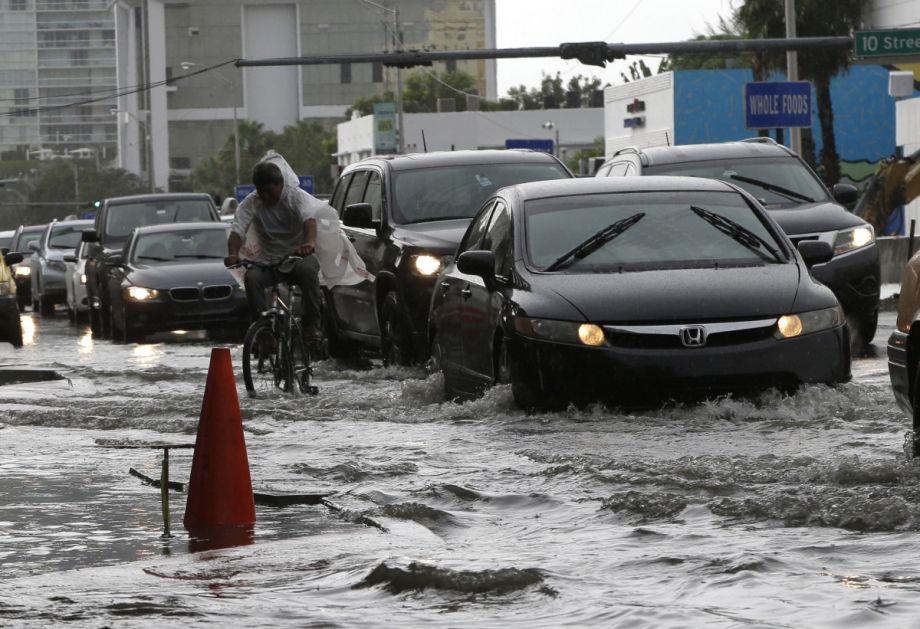 Jason Liechty, an environmental projects coordinator with Broward County, describes a scene from earlier this week: waves crashing and ebbing over both lanes of State Road A1A. Part of the road collapsed after Hurricane Sandy’s infamous whiteheads eroded the beach, scooped out a seawall and even crushed ocean-side sidewalks so that, according to one reporter, they looked like toppled dominos. Two years later, construction crews are rebuilding and adding new barriers, but on Tuesday, nothing kept the relentless water out.

“It’s just a reminder that we can rebuild in a more resilient way, but the sea doesn’t care,” he says.

And it’s only one example of Southeast Florida’s battle with sea level rise. From Miami sewers that channel high-tide saltwater back into downtown intersections to Miami Beach buses that roll through water up to their doors, the region’s infrastructure is already straining — or in the case of A1A, collapsing — as the borders between land and ocean blur. Though seas have risen only about a foot since 1880, they’re projected to climb three to six feet by the century’s end.

For many southeastern communities, this frightening reality is a call to arms. On December 3rd, Broward County was among 16 municipalities to receive a Climate Action award from the White House. It’s one of four counties participating in the Southeast Florida Regional Climate Change Compact, a bipartisan organization to address the unique needs of what some call the country’s climate change ground zero. When Jennifer Jurado, director of the county’s environmental planning division, lists mitigation and adaption efforts, it’s difficult to keep up.

The region is working on complete streets programs, coordinating with other agencies on light rail and trolley projects and bike-shares, and investing in charging stations, she says. It’s also working on a Renewable Energy Action Plan and trying to streamline the process for installing rooftop solar.

But like the other counties in the Compact — Miami-Dade, Monroe and Palm Beach — Broward is faced with a Tea Party governor and state (and national-level) politicians in an infamous state of climate denial. Which means that, when it comes to both policies and funding, the region’s crisis-mode is not mirrored by Tallahassee. The two regions’ parallel worlds came into sharp focus in October, when a group of South Miami officials passed a resolution urging southern Florida to secede.

Jurado says that when it comes to solar, she is “nervous about the potential loss of any tools, incentives or provisions.” However, she points to a number of regional efforts and federal grants that allow the county to move forward regardless. Broward was included in a Department of Energy Go Solar grant in the amount of $1.6 million. The county commission also offers financing through a PACE (Property Assessed Clean Energy) Program, which is basically a loan for solar installations and green retrofits that can be paid back through an owner’s property taxes.

The counties are also considering building a reservoir to capture stormwater. As Governing recently reported, it would reduce flooding when severe storms drop as much as 22 inches of rain in a single day by capturing the water, rather than allowing it to rush and pool on the already swelling coastline.

But that project would cost around $150 million, a potentially difficult sell to state or even federal funders not living with the seasonal reality of flooded streets. However, Jurado says the project is relevant beyond southeastern Florida because stormwater could offset supplies for the rest of the state, and also reduce the energy needed for treating reclaimed or brackish sources.

And while the state’s political climate may be difficult, the literal climate has bonded municipal agencies and allowed them to accomplish a lot. The voluntary compact by four counties occurred in 2010, when Jurado says they weren’t even seeing much federal action on adaption and mitigation. With inter-regional water, power and transportation networks and, then, a host of individual county task forces and action plans, she adds that regional coordination just made sense.

“I’d say that the drive for local investment was prompted by the absense of those actions” at the state and federal level, she says.

Liechty adds that a lot is happening on the regional level with infrastructure, because locally, there’s a sense of urgency.

“It’s not a partisan issue here,” he says, of climate change and the need to address it. With the flooded Fort Lauderdale road as case in-point, he says: “We see it, it’s here, it’s already happening.”