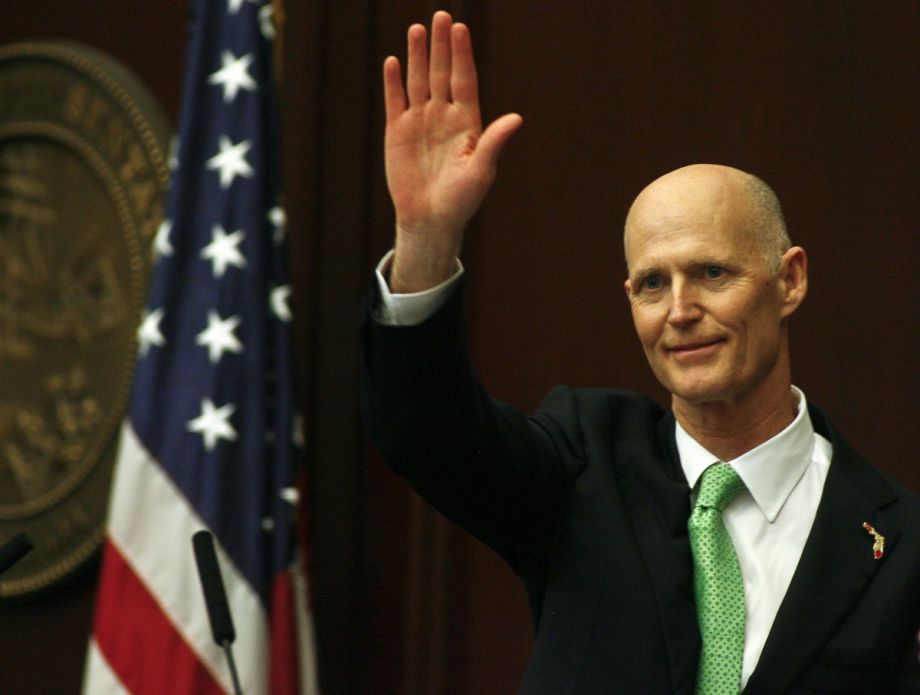 Gov. Rick Scott is quick to point out that Florida high-speed rail project All Aboard Florida is privately owned. (AP Photo/Phil Sears)

Florida’s November election could impact the future of a high-speed rail project, one of only three nationally in the works. Like the projects in Texas (read “The Bullet Train That Could Change Everything”) and California, the privately financed train is a hotbed of controversy, which may play out at ballot boxes along the state’s southeastern coast and even determine Florida’s next governor.

High-speed rail has a complicated history in the Sunshine State. Florida’s current governor Rick Scott was one of several Republicans to refuse federal funds ($2.4 billion) earmarked for high-speed trains in 2011. According to the Tampa Bay Times, his decision elicited “cheers from his tea party base, and harsh criticism from leading Florida Republicans and Democrats.”

Fast-forward three years, and a high-speed project is in the works — with cautious support from Scott. But All Aboard Florida, as it’s cheerfully titled, is different from the project Scott refused for one simple Tea Party-pleasing reason: It’s privately owned and operated by Florida East Coast Industries. And Scott is quick to point that out.

“All Aboard Florida is a 100 percent private venture,” he said in a TV interview in June. “There is no state money involved.”

The train is expected to connect Miami to Orlando in less than three hours with stops in Fort Lauderdale and West Palm Beach. It will be the slowest of the three proposed U.S. rail projects, maxing out at 125 mph.

But critics have been quick to see the hand of government, and they’re partially right. PolitiFact recently fact-checked Scott’s statement as “mostly false.” The state will pay for some infrastructure to benefit the project, including quiet zones through impacted towns and an intermodal transportation hub at the Orlando International Airport. And AAF may not always be a “100 percent private venture” because it’s applied for a federal loan in the amount of $1.5 billion.

While rail projects often seem to speed down a clear partisan line — left in favor, right against — this is not the case in Florida. One of the project’s most vocal opponents is Scott’s likeliest November opponent, Charlie Crist, a Democrat. Crist started his career as a Republican, serving as governor prior to Scott. After the Tea Party’s Marco Rubio beat him to a Senate seat, however, he left the Republican Party and veered left.

Crist has been quick to connect Scott to the All Aboard Florida project, writing in a fundraising email that it “is receiving millions in Florida taxpayer dollars,” (a statement, according to PolitiFact, that is only “partly true,” for the reasons listed above.) Meanwhile, he’s critical of Scott for turning down federal funds from the Obama Administration, claiming he rejected them to “cut out competition for a private company with strong ties to his chief of staff, Adam Hollingsworth.” Hollingsworth did previously work for Parallel Infrastructure, a subsidiary of AAF’s parent company, though Scott (none too surprisingly) claims this has had no impact on his administration.

Crist hasn’t exactly said he would can the project, but he’s not voicing support of it either.

“I have serious concerns about it,” he told the Sun-Sentinel earlier in August. “I haven’t reached a final conclusion. But I think high-speed rail is much better for Florida than what this thing looks like.”

So the unusual November race is beginning to stack up like this: A Republican in (cautious) support of AAF against a Democrat in support of high-speed rail generally but not the project in the works. The question, then, is how their back-and-forth sound bites will play out in the polls — and whether November’s winner will actually shape AAF’s future.

Lance deHaven Smith is a professor of public policy at Florida State University. He believes AAF could swing the election for two reasons: the southeastern concentration of opposition and Florida’s split-down-the-middle politics.

A vocal group that Smith calls NIMBYs comes mostly from Florida’s Treasure Coast, in communities where the train will not stop — its goal being to move people quickly between densely populated urban areas — but pass through. Residents worry about property values, noise, quality of life and rural character, and have formed a coalition called Florida Not All Aboard.

The advocacy group is non-partisan (its tagline “Stop Big Choo Choo in His Tracks,” has a right-sounding ring), but Smith says many of the areas impacted actually have a sizable Democratic base. The district encompassing Martin and St. Lucie counties, for example, currently has a Democratic representative.

And while Florida has gone blue for Obama in the last two national elections, it tends to go red during off-year state elections, Smith says, because Democrats tend to stay home. But if an issue like AAF mobilizes the left, even in a small corner of Florida, their vote could swing the gubernatorial election.

“Even a slight change in turnout” could affect the race, he says. “That’s how very sensitive and changeable the political wind in Florida is.”

Darryl Paulson, a professor of political science at University of South Florida St. Petersburg, does not believe the issue will be a defining one in the November race. However, he does think the outcome will shape the project’s future.

“Crist has indicated that he will appeal to Obama to restore the funding for the rapid rail project between Tampa and Orlando,” he writes in an email.

However, Paulson doesn’t see either project moving forward in the short-term.

“Most Republicans oppose the projects and they control the legislature,” he explains. “Most Democrats favor the projects, but they do not have the political clout to implement them.”

But a look at the project’s website gives a different impression.

“All Aboard Florida is moving full speed ahead,” it declares. Passenger operations are slated to begin in 2016. Right-of-ways have been obtained and environmental documents have been finalized. Stations are “near ready to break ground.”

Perhaps that’s true, and November’s political outcome will do little to stop it. But it’s starting to look like the very man who refused federal funding for high-speed rail could become its unlikely champion.