So You Want to Change Zoning to Allow for More Housing 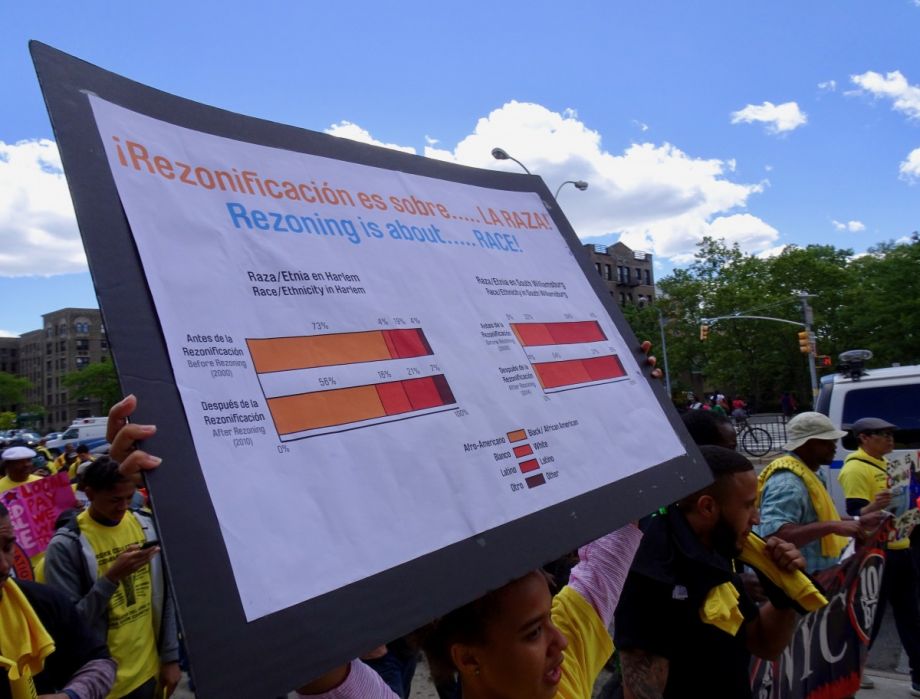 Community members along the Jerome Avenue Corridor in the South Bronx marched to demand a “Just Rezoning” in June 2017. (Photo by Oscar Perry Abello)

As cities and states around the U.S. propose to rezone areas in order to solve problems such as housing shortages and poor connectivity to jobs, they could be creating other problems: gentrification, and angry neighborhood activists.

On the one hand, some say more housing is needed to accommodate influxes of new residents and businesses to growing communities. On the other hand, others say rezoning that allows for new development can inadvertently drive out low-income residents and local businesses and — with little warning or time to adjust — alter the character of neighborhoods.

“Jurisdictions are beginning to understand that up-zoning in order to absorb growth has unintended consequences — it increases the value of the real estate and therefore increases displacement pressures,” says Nora Liu, northwest regional manager for the Government Alliance on Race and Equity, a national initiative spearheaded by the nonprofit Race Forward that is working with jurisdictions around the country to pioneer equitable development strategies.

“If an area is rezoned, it needs to be done with parallel strategies to strengthen communities, so that people in the communities can thrive in place,” Liu adds.

Competing needs of new development and neighborhood preservation have surfaced in a number of land use projects around the country. Neighborhood activists and politicians fear unforeseen impacts like displacement, big-box business growth, and a loss of landmarked buildings that rezoning or other development projects could have on communities — and they often lose the fight.

In Los Angeles, for example, local preservationists have objected to a developer’s project to build two-dozen new rental apartments that is in line with the city’s transit-oriented development goals, because it would dwarf the block’s low-rise apartment buildings and, also, raze a 1920s housing complex located by the Whitley Heights Historic District. The project’s opponents have little chance of stopping the new development, however, as the city’s planning director has already approved it, according to Curbed.

In the case of Brooklyn’s Broadway Triangle, housing activists sued the city for overlooking the impacts that a rezoning of part of the site (from manufacturing to residential) could have on displacing black and Latino residents from nearby neighborhoods. A Manhattan Supreme Court Judge dismissed the lawsuit in July upon determining that the city does not have to undertake a racial impact study as part of rezonings.

It is the potentially harmful effects of rezoning that policy experts like those at the Pratt Center for Community Development want to bring more to light. Last week, the Pratt Center released a new report, “Flawed Findings,” which concludes that the city greenlights rezoning and other development projects without properly assessing the potential for displacement as a consequence.

Specifically, the report calls into question the New York City Environmental Quality Review process, which is used to assess whether a development project or zoning change could have negative “environmental impact” on surrounding communities — including potential displacement of existing residents. But the methodology of the review process “has assumptions that are so absurd that it does not lead to conclusions that make any sense about actual residential displacement risk,” according to Elena Conte, policy director at the Pratt Center for Community Development. “So, it’s hard to see the validity of any rezoning that relies on this type of an indirect residential displacement measure.”

According to the Pratt Center report, the city tends to dismiss the potential of indirect displacement impacts to communities undergoing rezoning if the project at hand includes mandatory inclusionary housing or a minimum amount of affordable housing required at the future site. “There is a complete disconnect between the lived experience of these folks and what will happen both in terms of the timing of the creation of new affordable units and the eligibility and income requirements for those new units,” Conte explains.

In the Broadway Triangle project, for example, developer Rabsky Group’s promise to make one-quarter of the new development’s housing units permanently affordable appeased the city, but not local residents. More recently in August, the New York City Council approved a controversial rezoning plan for Upper Manhattan’s Inwood neighborhood — which locals rallied against despite its promise of 1,600 new affordable housing units.

“It is important to make sure that the housing created meets the affordability and family-size needs of those vulnerable to displacement — that the housing is right-sized as well as right-priced,” notes Liu.

Contrary to the judge’s findings in the Broadway Triangle lawsuit, the Pratt Center team points to the very need for a development impact analysis related to the race or ethnicity of local populations. “[The environmental quality review says] to describe demographic conditions,” says Conte, “but it doesn’t explicitly say to look at the racial breakdown of the neighborhood or of who you’re saying is vulnerable.”

While acknowledging the challenges of predicting displacement tied to new zoning or development, the NYC Department of City Planning defends the existing process.

“Although [the city’s environmental quality review process] is not a means of precisely predicting the future or establishing criteria for policy goals, it is an important tool to inform policymakers by providing a comparison of what we reasonably expect to happen if we take an action versus not taking it,” says Howard Slatkin, deputy executive director for strategic planning at the NYC Department of City Planning. “We stand by the validity of our environmental reviews. The Mayor’s housing plan is driven by goals of improving affordability and combatting tenant harassment and displacement. We believe that in situations like these, walking away and leaving the zoning as is would make those problems worse, not better.”

The Pratt Center report recommends that the municipality conduct a citywide displacement risk analysis that should inform housing and development policy, and that it adopt a comprehensive anti-displacement policy agenda “with a no net loss of affordable units as a key goal.”

Elsewhere in the country, several recent zoning proposals have failed due to overwhelming community opposition — including California’s controversial SB (Senate Bill) 827, which would have sanctioned the construction of larger residential buildings near transit stops in an attempt to quell the state’s housing crisis. The bill was effectively killed in April by its opponents, some of whom claimed that it would result in pushing low-income residents out of their neighborhoods.

The City of Austin also tried to overhaul its land development code so as to encourage new building growth around the city, but, citing a “poisoned” process, the city recently scrapped the plan.

Seattle, meanwhile, is undertaking a citywide growth and equity analysis to better understand potential displacement impacts of growth measures on marginalized populations and come up with mitigation strategies. Accompanying the analysis is an equitable development implementation plan, which commits to using equity-based data and criteria in the analysis of community development projects and strategic plans associated with the city’s 20-year Comprehensive Plan.

“The plan says that you need to have strong and resilient communities — and you need to have great places with equitable access. So, it is looking at places and people together,” explains Liu, formerly a community development manager at the City of Seattle.

Additionally, Seattle has adopted an equitable transit-oriented development policy that intends to include local stakeholders’ input in the reuse of surplus property that came out of a light rail expansion.

While truly inclusive community engagement is a necessary component of equitable development, it is not sufficient on its own, according to Liu.

“What follows — how agencies and institutions incorporate the input and support implementation of the strategies to achieve the vision of impacted communities — is critical,” she says.