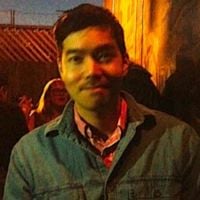 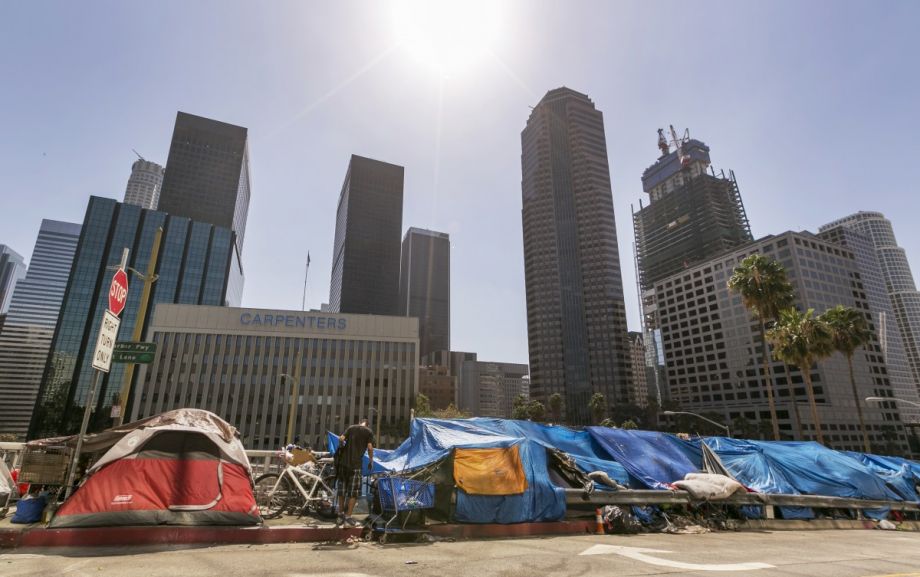 Los Angeles declared a state of emergency on homelessness in 2018. (AP Photo/Damian Dovarganes)

As founder and executive director of the Crenshaw Subway Coalition, Damien Goodmon spent years organizing his community in support of adding a Leimert Park stop along the planned Crenshaw-LAX light rail line in Los Angeles, scheduled to open in 2019. But earlier this year, Goodmon headed to Sacramento to testify that the very station for which he’d stumped is now in danger of becoming a Trojan Horse used to displace the community that once rallied around it.

At issue in California’s state capitol that day: the wildly controversial SB (Senate Bill) 827, created to impose a blanket, statewide upzoning of buildings near transit stops. As written, SB 827 would require all California municipalities to remake heavy-traffic areas to allow heights of 45 to 85 feet depending on distance from transit, the width of streets, and other characteristics — higher than what many local zoning commissions allow. SB 827 would also waive any minimum parking space requirements in those areas.

The bill’s supporters described it as a boon to people at every income level, including low-income communities of color. They argued that the resulting increase in housing supply would relieve high housing demand, resulting in lower housing prices overall. But to Goodmon and others, that argument didn’t add up. He testified that the market-rate development unleashed by SB 827 would be too pricey for most existing residents in areas where it would take effect, resulting in further displacement and gentrification in a state with an already infamous housing crisis.

In a widely circulated open letter, Goodmon likened the bill to the Indian Removal Act of 1830, writing that the bill’s true intent was “to exile low-income people of color who currently live in the urban centers of commerce, culture and community that WE [sic] have built.”

Goodmon and the Crenshaw Subway Coalition weren’t the bill’s only opponents — some 37 additional affordable housing, tenants rights and transit equity groups sent their own letter to the primary sponsor of the bill, California State Senator Scott Wiener, voicing their opposition:

There is no place for the segregationist planning that defined so much of our metropolitan history, but the antidote to segregationist low-density zoning imposed upon and against communities of color is not an “open the floodgates” approach. As recent research demonstrates, increased market-rate development near transit without concomitant investments in preserving and creating affordable housing, will displace core transit riders in transit-rich neighborhoods.

The path to racial and economic justice through city planning starts with listening to the most impacted communities and learning from their experience as they’ve struggled against waves of disinvestment and displacement.

But also opposing SB 827: wealthy white homeowners across the state, in communities like Beverly Hills and Palo Alto, the historic and current beneficiaries of said “segregationist planning.” The unusual pairing — 90210-dwellers and South Centralites aligning to defeat Wiener’s legislation — made its way onto social media, where observers wondered if the rich were pulling all the strings in the battle against the bill.

Here are a few highlights from just one of many, many threads about SB 827 on Twitter, this one starting with a tweet from Scott Weiner himself:

It’s fascinating when racist anti-growthers pretend they’re opposing pro-housing bills b/c, they say, low income communities & communities of color will be harmed. These folks should be honest about what they want: to keep those same exact communities out of their neighborhoods. https://t.co/wX3Dt2D09I

Those same low-income communities and communities of color are opposing your bill because it will remove the only protections they have against racist gentrification by big-money interests that want to ethnically cleanse the cities for build-at-all-cost profit. Listen to THEM.

Saying low-density zoning was designed to protect low-income communities from gentrification is profoundly ahistorical. Read The Color of Law and learn the actual history.

Many zoning regulations, regardless of original intent, are now the only barrier to mass displacement of communities of color in newly trendy urban areas. Anyone removing them without vigorous anti-displacement protections is aiding and abetting ethnic cleansing.

You are upzoning communities with VERY different racial and wealth profiles. It doesn’t take a PhD to know that the impacts will be disparate. What, specifically, are you putting in this bill to address that?

breaking the alliance of convenience between those two groups will require dealing with the possible disparate impacts forthrightly. there’s a subset of people who simultaneously believe the big picture need to pass SB827 and yet oppose it for that reason

Goodmon says there’s a “soft racism” in the dismissal of low-income people-of-color’s opposition to legislation like SB 827. Many of the bill’s supporters came from the so-called “YIMBY” (yes-in-my-backyard) movement, which is made up of largely white, male, and relatively young professionals who believe more market-rate development will trickle down to the less-wealthy and solve the state’s housing crisis.

“It’s not at all surprising to me that [supporters of SB 827] would believe that the very people who’ve been doing housing justice work before it became a middle-class problem … could not possibly come up with very well-thought out, rational reasons to oppose a trickle-down housing theory,” Goodmon says. “I’m doing everything short of calling them racist, [because] they fail to recognize the agency held by communities of color that have been dealing with housing justice issues.” 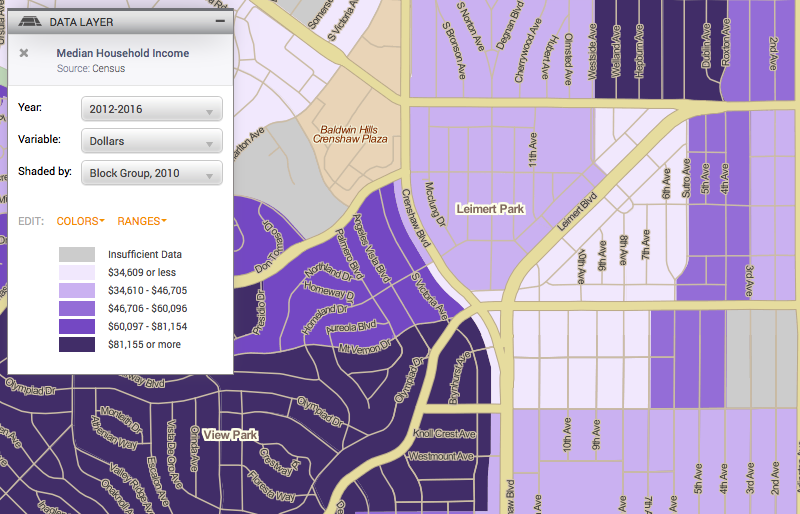 A blanket statewide rezoning around transit stations, Goodmon testified in Sacramento, would put the families renting on the east side of Crenshaw — along with many other low-income households of color near transit stations across South Central L.A. — in the path of developers seeking to acquire properties and bulldoze them to make way for higher, denser, market-rate construction. Goodmon and a diverse group of like-minded housing advocates contended that, faced with a choice between demolishing a range of areas to make way for new, taller, denser housing, developers would naturally start by clearing out neighborhoods where land is easiest to acquire — those filled with low-income renters.

It’s a pattern that has historical precedent, from Urban Renewal’s Slum Clearance Committees in the 1950s to the contentious building of the interstate highway system, which frequently resulted in the wholesale destruction of once-thriving black neighborhoods.

While some completely dismissed Goodmon’s words as just more standard “NIMBY” (not-in-my-backyard) opposition to development, at least some of the criticism got back to Wiener and the bill’s author, Brian Hanlon, the head of the young, tech-funded California YIMBY Political Action Committee. (The group signed up “more than 100 CEOs, Co-Founders, and Technology Investors” to support the bill in a letter.) The opposition was loud enough that the state senator amended the bill, adding language meant to allay displacement fears.

One amendment “explicitly defers to and preserves local demolition controls and limitations, meaning that if a local community restricts or bans demolitions, SB 827 will not change that local determination.” Los Angeles, for example, in 2017 stiffened its demolition controls protecting rent-stabilized properties.

Another amendment to SB 827 “bans the demolition of all renter-occupied housing for SB 827 projects unless a Right to Remain Guarantee is granted for all existing tenants, including full financial assistance for all moving costs and rental payments while the project is under construction.” Right to Remain means if a tenant is displaced due to a demolition, the developer must house the tenant nearby at the same rent while the project is being built and must provide a comparable unit to the tenant at the same rent once the project is done. (Caveat: “Right of first return” laws are dicey — a study by the DC-based think tank the Urban Institute found just 19 percent of households “returned” after the Clinton Administration’s HOPE IV public housing redevelopment plan.)

Yet another amendment made clear any local inclusionary housing ordinances would remain in place under SB 827.

In the end, SB 827 didn’t garner enough support to get out of the California State Senate’s Transportation and Housing Committee. YIMBY groups characterized it as just another victory for racist NIMBYs who oppose new construction at any cost.

To Goodmon, the notion that he is a NIMBY apologist is nothing short of defamation: “That these other people who have no experiences in our communities try to misappropriate our history, manipulate our struggles to advance the powers of the people who’ve been regularly oppressing us … it’s just insulting.”

The work on all sides continues. Wiener has vowed to bring back SB 827 in a different form in the next legislative session. Meanwhile, a companion bill, SB 828, is still alive in the California State Senate. The bill would expand the state’s control over local construction and increase building requirements based on annual production minimums. Failing to meet one year’s minimum would mean higher minimums the following year. As one anti-YIMBY pointed out on Twitter, cities like Oakland and San Francisco produce above and beyond their housing targets for units affordable to high-end buyers and renters, but under-deliver on units for middle-income and low-income ones.

Yimbys should look at the last column, it basically obviates their entire argument in Oakland. pic.twitter.com/l6YJGPvsJ3

Goodmon likewise calls SB 828 “disastrous,” and while it hasn’t garnered the national attention SB 827 did, his take is that it “basically says areas are already gentrifying need to gentrify faster,” encouraging bigger developments “in communities that clearly can’t afford [to rent units in] them.”