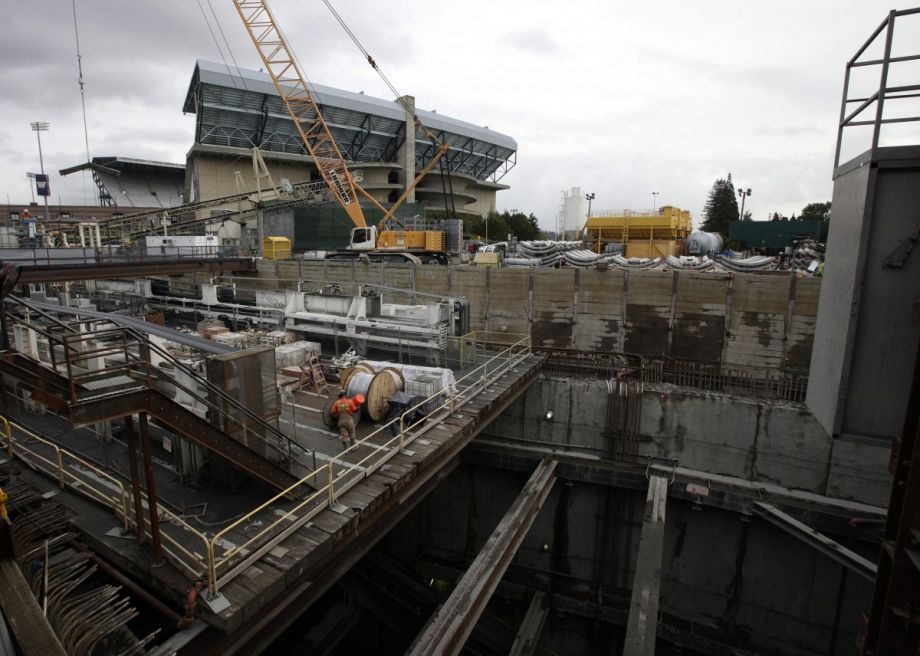 An earlier section of light rail tunnel under construction in Seattle, from 2011. (Credit: AP)

Over the next two decades, Sound Transit — the transit agency serving the greater Seattle area — will buy a lot of land as it builds out its second and third phases of light rail expansion. Much of that land will be used as staging areas for new station construction. As that construction wraps up, the agency will be left with surplus property that presents some of the best opportunity for affordable housing development in a region ever more hostile to low- and middle-income residents.

The “80-80-80” policy was a big step towards equitable transit-oriented development. Thanks to three years of lobbying by a coalition of housing, transportation and community advocates, the agency is taking their commitment to equitable transit-oriented development even further. In late April, the Sound Transit board adopted a new policy that defines equitable housing and economic development and establishes benchmarks for community engagement in project planning and surplus land disposition.

Jessica Ramirez, a coalition member and lead organizer with community advocacy organization Puget Sound Sage, says the new policy, “actually holds Sound Transit to the 80-80-80 rule in a way that it can be applied.”

“Our deepest desire is that before any land is acquired, before any land is disposed of, that the community folks who are most impacted by those changes are going to be the ones first informed so there can be a planning process that doesn’t tokenize them and really engages with and listens to the solutions they have,” says Ramirez.

Though transit-oriented development can be used to further affordable housing goals and further equity by providing inexpensive transportation, it can also harm affordability. Seattle’s Columbia City and north Beacon Hill neighborhoods — traditionally lower-income communities of color — both got light rail stations in the first phase of construction. In the years since, both have seen significant gentrification with expensive new apartments, single family homes, restaurants and shops. Near Angle Lake, Sound Transit’s newest light rail station in SeaTac, 170 residents of a mobile home park are fighting the owner’s plans to evict them and sell the land to a hotel developer.

“Sound Transit increases land value just by touching the land,” says Hester Serebrin, policy director at nonprofit Transportation Choices Coalition. “A lot of people are looking to live near transit. [With this policy] it’s not just ‘we’re building this housing for someone,’ but creating a process to change the decision-making power to include folks most impacted who, in theory, could gain the most from the system.”

The new policy also pushes Sound Transit to think beyond housing on its surplus land and consider equitable commercial development as well. After all, small business owners can get displaced when land values rise and landlords seek out higher-dollar tenants.

“Housing and housing affordability aren’t the only ways to mitigate displacement,” says Ramirez. “This new policy comes with opportunities for small businesses to continue to operate in the neighborhoods they’ve grown to service and support. What does it look like for those business owners to create high growth jobs that not only allow employees to earn good incomes, but also live in the neighborhood they work in?”

The Sound Transit board’s adoption defines and clarifies the agency’s equitable transit-oriented development goals. Now it’s up to the agency staff to create a plan for implementation. That document will be put together over the next year.

“We have to put together a plan that reflects when those properties would be ready for public offering and establishes how to work with stakeholders and jurisdictions and developers to help us make plans in advance of those offerings,” says agency spokeswoman Kimberly Reason. “Going forward we’ll work with those groups to plan very consciously how do this in a way that will be consistent with providing affordable housing and creating vibrant communities around transit. It’s a very holistic approach to how we dispose of our properties.”

Though the implementation plan is still a year out, Ramirez already has some ideas about how Sound Transit might put the equitable transit-oriented development policy in action. In southeast Seattle’s Rainier Beach, she thinks surplus Sound Transit land could be used to house the Rainier Beach Action Coalition’s Food Innovation District, a plan to cluster food production, manufacturing and technology businesses around the light rail station to “provide access to career-path living-wage jobs.”

Ramirez also thinks surplus land near the Angle Lake Station could be a perfect test piece for equitable land use if the agency sells the land to the mobile home park residents fighting eviction. “It’s a great opportunity to be able to give the [mobile home park] residents the possibility of purchasing that land at a discounted rate,” she says, “So they can [move their trailers to land they own and] be rooted in place and live resiliently.”