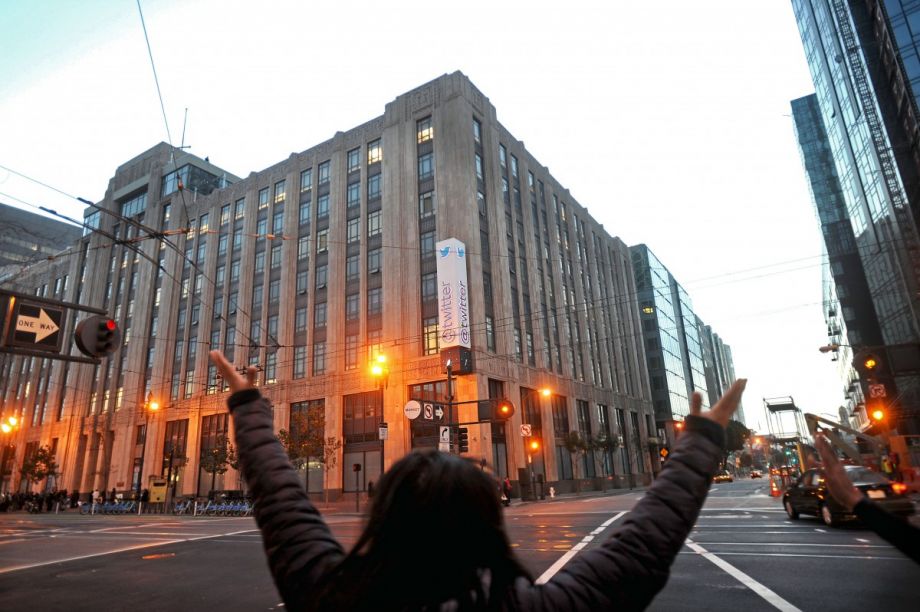 A man throws his arms up in protest outside of Twitter headquarters in San Francisco, on the day the company went public last fall. Credit: AP Photo/Noah Berger

On Tax Day, members of the Service Employees International Union (SEIU) Local 1021 in San Francisco will march to Twitter headquarters and give the tech behemoth a bill for the tax break the company received from the city three years ago.

Now, there’s no way that Twitter founder Jack Dorsey is simply going to fork over the reported $56 million they’ve saved for moving into the city’s Mid-Market neighborhood. But David Campos, a member of the San Francisco Board of Supervisors, has requested a hearing on the issue. And Larry Bradshaw, vice president of the SEIU union in San Francisco, is hopeful that the march will shift the narrative away from tech workers — who are consistently vilified in the press — to the CEOs, who are asking for lavish tax breaks.

“We didn’t like some of the general anti-tech worker sentiment that was being expressed, so we’re really trying to reframe it,” Bradshaw told me when I asked him about the impetus for the movement. “Our problem is not with tech workers. We like tech workers. We want to focus on the tech CEOs who are asking for these handouts. And there’s no problem with them being in the city, just pay your taxes!”

The payroll tax break — often referred to as the Twitter Tax Break — was approved in 2011. It was designed to incentivize growing tech companies to move into the underdeveloped Central Market and Tenderloin districts by freeing them of the city’s 1.5 percent payroll tax for six years. The tax break has already cost the city an estimated $100 million, according to the SEIU, more than half of which was accounted for by Twitter. (Farmville creators Zynga, valued at $7 billion, saved roughly $1.5 million from the Twitter Tax Break in 2011. They laid off 520 employees last summer.) But, these estimates only cover the first three years. If Twitter continues to grow they could keep even more money from the city’s coffers in the next three.

Bradshaw was incredulous when he first heard about the tax break. “Why are we going to make sacrifices and why does Twitter need a tax break?” he asked. “Come on, they’re valued at $36 billion!”

America has a subsidies problem — from stadiums to tax incentives for multinational shoe companies, city leaders have difficulty saying no. You can’t blame the companies: They’re true capitalists just doing their jobs. And they have very little trouble convincing the general public — and lawmakers! — of what might have happened had they actually left town for greener pastures.

Which is why the Twitter Tax Break exists in the first place: They, like many before them, threatened to go elsewhere. Twitter claimed they were ready to, as Bloomberg put it, go on a “hiring spree” and simply could not afford to in San Francisco given the city’s payroll taxes. The very same payroll taxes that other San Francisco-run businesses are required to pay. So, as is expected, the city bent over backwards to keep the tech darling in town.

Fans of the tax break will talk about how it spurred development and revitalized the neighborhoods. Try telling that to residents and businesses that have been pushed out of the neighborhood by rising rents. (Office rents in the payroll tax-exempt zone have spiked 83 percent since 2010.) There’s no denying that high-profile companies can be a catalyst for economic development and anchor institutions for years to come, but that doesn’t mean lawmakers should go around doling out large tax incentives for companies that are already rolling in dough.

The SEIU knows that their march won’t enact immediate changes, but the idea is that it might sway the general public’s feeling about these sweet deals. “Look, we don’t expect an immediate change in Mid Market tax breaks. But we do expect to be able to limit any future tax breaks,” Bradshaw said. There’s been a groundswell against the incredibly wealthy tech companies contributing to rising rents and displacement. Bradshaw wants to use that captive audience to influence policy.

“We’re just asking people to use their collective imagination to think about what could that $56 million buy?” he said. “And, in a way, we hope that can bring it back to the public policy makers. That’s what the march on April 15 is about: To really up the pressure on the mayor’s office to stop giving these types of tax breaks. We’re trying to shift the blame onto City Hall where it belongs for these city policies and for the displacement of working people.”