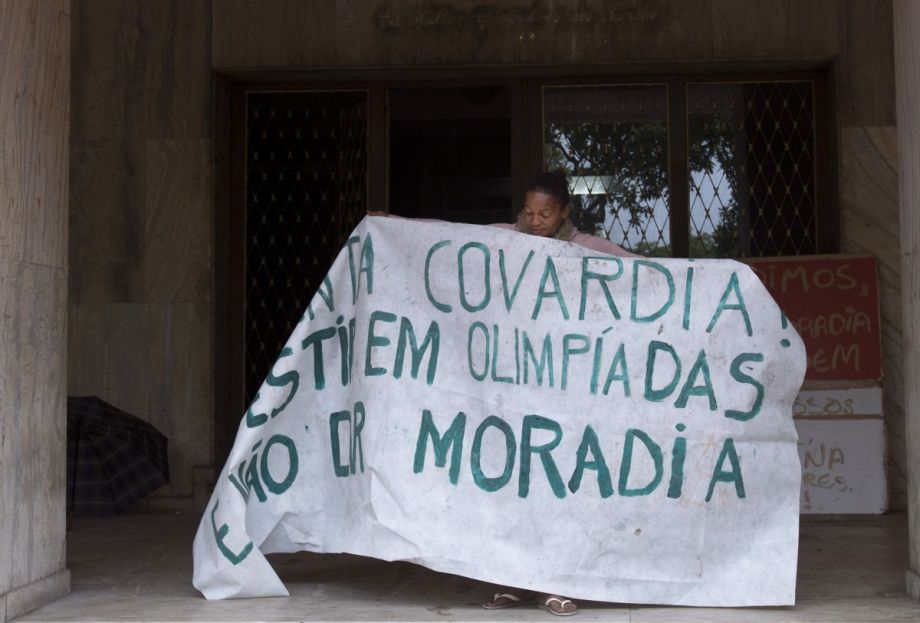 A woman holds a banner that reads (translated from Portuguese) “Such cowardice. Investment in Olympics and not housing.” (AP Photo/Silvia Izquierdo)

After Rio de Janeiro bulldozed entire neighborhoods and displaced roughly 20,000 families to build stadiums and luxury hotels for the World Cup and the 2016 Olympics, protesters flooded the streets, accusing the city of selling its soul. Now, with those temples to worldwide competition crumbling only months after the closing ceremonies of the last games, the question becomes: To what end?

Even though officials touted the possibility of responsibly repurposing Olympics infrastructure leading up to Rio’s hosting, the Maracana Stadium has been looted, the games precinct has been shut down and other facilities are struggling to pay the bills, the Guardian reports.

“The most alarming visual deterioration can be seen at the Maracana, where worms have damaged the now-threadbare playing surface, windows inside the stadium have been smashed, copper wire stolen from walls and ceilings, and a reported 10% of the 78,000 seats have been torn up,” according to the paper. “Late in January local electric utility company Light cut off power to the stadium in response to unpaid bills, claimed to be in the region of three million reals ($940,000 in U.S. dollars).”

The $20 million golf course, along with several arenas, a tennis center and the velodrome, are struggling to attract new players. The golf course’s superintendent, Neil Cleverly, told the Guardian that the Brazilian Golf Confederation hasn’t paid the company that employs him, Progolf, for two months.

The news will probably not be surprising to critics of the Olympics, in Rio and beyond.

For her Next City feature on Rio’s “displacement industry,” Catherine Osborn toured some of the hastily built public housing where families from the bulldozed favelas were relocated.

Their plight was amplified in protests leading up to the games. In 2015, squatters took over a building that was supposed to be transformed into a luxury hotel, demanding that the government place them in public housing. One woman was fiercely critical of the government’s priority on high profile-sporting events.

“That’s the only thing that occurs to them to spend money on,” she told the AP. “They don’t provide affordable housing, health care, education or security.”

In terms of longtime sustainability and return on investment, massive athletic competitions are on shaky ground. As a result, in 2015, Boston pulled out of a bid to become an Olympics host. At the time, Mayor Marty Walsh said, “I cannot commit to putting the taxpayers at risk.”

In 2014, Stephen J. Smith reported for Next City that some spending by host cities may be wiser than others:

There are three main types of construction that come with holding the Olympics, summer or winter: transportation infrastructure (mainly railways, given that the games are usually held in dense cities), stadiums and housing. Experience shows that investments in the former are most likely to be enjoyed for decades after the closing ceremony, while the latter two types of public works have a tendency to work out less well.

Budapest, Hungary, which is in the running for the 2024 Summer Olympics, is making the case that midsize might be better than megacity. Saying compactness is a virtue for hosting, one of the officials behind the city’s bid proposes “the whole city turning into one single Olympic Park.”