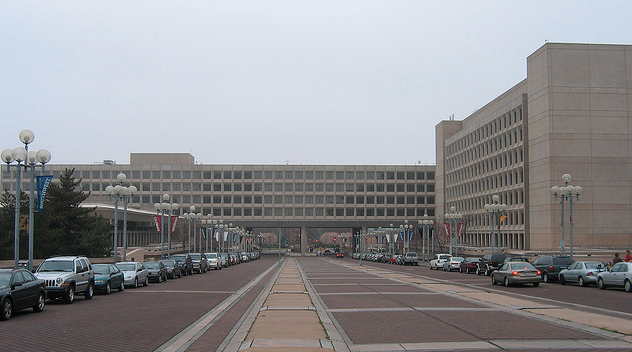 The Promenade at L’Enfant Plaza leads to the DOE’s Forrestral Headquarters, blocking the view of the Smithsonian Castle. Credit: Matt Johnson on Flickr

Examples of the mistakes of urban renewal abound in our country’s cities. The story is familiar: Well-meaning planners and governments tore down condemned “slums” – often working class, minority neighborhoods – and replaced them with expanded highways and large, concrete monoliths.

Our nation’s capital is no stranger to this phenomenon. One of the most glaring examples is L’Enfant Plaza in the city’s Southwest quadrant. Though named after Pierre L’Enfant, the District’s original planner, the plaza and its surrounding buildings were designed by Modernist architects, including the world-famous I.M. Pei.

Though Pei’s nearby National Gallery of Art is hailed as a great success and masterpiece, the Plaza doesn’t have nearly as many fans. Its overwhelming mix of roadways cut off pedestrians from D.C.’s Southwest Waterfront, and the Department of Energy’s (DOE) Forrestal complex blocks views to the Smithsonian Castle on the National Mall. In an appropriately ironic twist, the Department of Housing and Urban Development’s headquarters are also in the area.

But the mistakes of the past can and do give way to the hopes of the future. Last week, the National Capital Planning Commission (NCPC), whose predecessor was largely responsible for the original “redevelopment” of Southwest, released its plans for what they are calling the SW Ecodistrict. The plan represents an attempt to correct the mistakes of the past and open up Southwest, allowing residents and visitors to access the waterfront.

The new plan calls for decking over existing highways and rail lines to return the area to pedestrians. Credit: Matt Johnson on Flickr

The plan will pump the 110-acre area with as much as 5 million square feet of office, residential and hotel space, as well as a possible new museum – maybe the National Women’s History Museum — and 14 acres of park space. In the aim of recreating the original D.C. street grid and relegating the bustling traffic, 17 new intersections will be created as well as a renovation and expansion of a Virginia Railway Express commuter station. The 15 blocks encompass eight federal buildings, necessitating partnership with various federal agencies.

Building infill will create a full urban experience, and a pedestrian boulevard built over I-395 and a similar deck built over the Southwest Freeway will encourage foot traffic. Perhaps one of the most important aspects will be tearing down the DOE’s headquarters — rebuilding it into the fabric of L’Enfant’s original plan — and allowing a straight view between the Waterfront and the Smithsonian Castle on the National Mall. The plan aims to return the area to the regular urban fabric of D.C.

One of the main features of the redevelopment plan is its ecologically minded design standards and goals. The redevelopment aims to create a zero net area for carbon emissions. All energy will be produced on-site through the use of solar panels and techniques like mining sewerage for heat. Other elements such as green roofs and permeable pavement will also play a role in creating an example of best practices. These green and eco-friendly aspects of the project are impressive, but even more exciting is the concerted effort to rebuild and reknit the area’s street grid back together.

The SW Ecodistrict is not the only redevelopment or major project in the area. Along the Waterfront, private developers have teamed with the District government to remake the area into an upscale destination that will be titled The Wharf. In front of the Federal Aviation Administration building, controversy has ensued with Frank Gehry’s design of the proposed memorial to Dwight D. Eisenhower, the president largely responsible for much of the highway system that played a role in the urban reclamation practices of the ’50s and ’60s.

Despite some early praise for the project, there is still a long way to go before any physical progress will be seen. And not much has been talked about the potential costs of such a large restoration of urban space. Still, at least federal employees, beleaguered tourists and heretofore isolated Southwest residents will have something to look forward to happening in the long-desolate space.