Rashid Shabazz of the Campaign for Black Male Achievement – Next City

Rashid Shabazz of the Campaign for Black Male Achievement 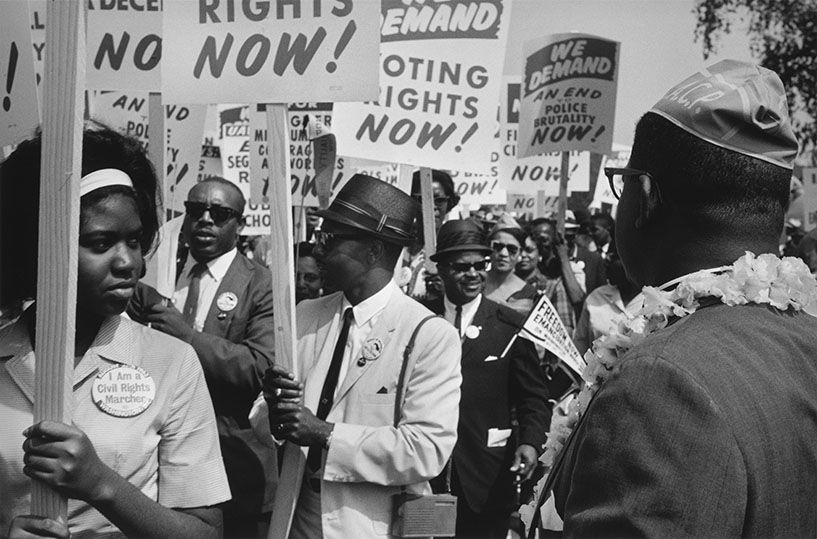 From the March on Washington in 1963. © Estate of Leonard Freed – Magnum Photos (Brigitte Freed)

The program partners with organizations and cultural institutions to leverage private and public investment in programs that better the lives of black men. Its reach ranges from Baltimore’s Center for Urban Families, an organization focused on responsible fatherhood in urban communities, to American Promise, a documentary that follows two black boys through private schools over the course of 14 years.

Rashid Shabazz joined the campaign as a program officer in early 2009. Shabazz, who lives in my building in Crown Heights, Brooklyn, draws on his childhood experiences living in the borough’s Marlboro Projects and adolescence in Virginia for his work at Open Society. I called up Shabazz to talk about equitable neighborhoods, changing societal perceptions of black men, and the legacy of Dr. Martin Luther King.

Next City: What is one of the biggest issues you try to tackle with your work?

Rashid Shabazz: Insights on how we can change perceptions around black men and boys. One of the biggest challenges we face is that even if we want to change policy, the policies that have been created that affect black men and boys are directly driven by a lot of misperceptions that people have around black men. If all you know or think about black men is that they’re criminals or that they are not assets to society, then you’re going to create policies that will be more deficit-focused. You will have increased incarceration, and you’ll have to focus on providing treatment programs or job training programs. You’ll be focused on building prisons.

And so we’re trying to think about what are the ways which we can elevate the issue around black male achievement — that black men and boys are assets to our country. If you can improve the conditions for those who are the least among us, it can only strengthen our country as a whole.

NC: What are some of the successful strides you’ve made?

Shabazz: With former Mayor [Michael] Bloomberg, we launched the Young Men’s Initiative to improve the education and livelihood of young black and Latino men in New York City. Which is the kind of initiative that requires public-private partnerships. Bloomberg’s philanthropy invested $30 million, Open Society invested $30 million and the city brought another $67 million. That public-private partnership has become a model for the rest of the country.

NC: Is the idea that you will spread these ideas to other cities?

Shabazz: What we’re doing now is looking at ways in which we can replicate that model in other cities. Last year we announced, through the National League of Cities, an RFP process where 33 cities around the country decided that they wanted to invest in this.

NC: What sort of commitment are you making?

Shabazz: We’re providing technical assisting grants to cities around the country who are committed to explicitly focusing on improving the outcome of black men and boys in their communities. Eleven cities were selected. They range in size: Some are rural-focused, some are urban. It’s our first attempt at how to replicate on a smaller scale what we were able to do with the Young Men’s initiative.

NC: On a more, well, historical note, how has the legacy of Martin Luther King, Jr. informed your work at Open Society? The Campaign for Black Male Achievement feels like an extension of his life’s work.

Shabazz: That’s the way I’ve been approaching this work — thinking about how this is part of the ongoing continued legacy of the Civil Rights Movement. To ensure that we have an equitable society where everyone feels that they are getting the best education, the best health care, and the best resources to ensure that they can maximize their contributions to society.

The work of the campaign is a direct link to the tradition and legacy of Dr. King and Thurgood Marshall and those who championed the Civil Rights Movement. We just celebrated the 50th anniversary of the March on Washington this summer, and I think we’re still trying to assure that Dr. King’s dream is lived in real life. We’re getting closer, but we’re still far, far away from that.