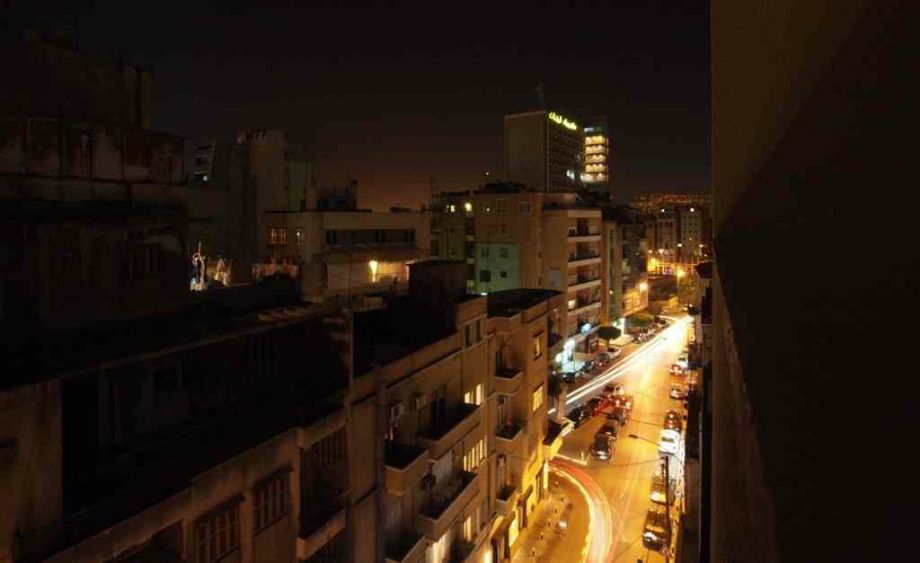 Along the narrow alleys of Tripoli’s most impoverished neighborhood is a shop where locals find second-hand clothes imported from Europe. The shop is organized with rows of shirts on one side and stacks of pants in between the aisles. But while the store is meticulously organized, especially for this part of town, where trash is often scattered nonchalantly across the ground, it is also pitch dark, as the lights hanging from the shop’s ceiling aren’t switched on.

“I haven’t had power in three days,” says Abu Bakr Halfawi, the shop owner in Tripoli’s Bab al-Tabbaneh neighborhood, as he points to the twisted and mangled power lines hanging near the roofline. “The government hasn’t done anything to help me either.”

Halfawi has resorted to using a generator for power, though he cannot afford to run it for all hours of the blackout. Generators are technically illegal in Lebanon, but their use has become so widespread in a country plagued by frequent and unpredictable power cuts that a couple years ago the government threw up its hands and began regulating the cost of them. Those who cannot afford generators make do with candlelight.

Lebanon has an outdated and aging infrastructure that hasn’t been updated since before the end of a brutal and vicious civil war that lasted from 1975 to 1990. The infrastructure situation worsened in July 2006 when Israel and Hezbollah, a Lebanese political party with an armed wing, fought a month-long war that cost the government over $110 million in damages.

Today, in Beirut, the capital, power cuts last three hours each day and are on a rotating, four-day schedule. With the harsh summer heat comes increased usage of air conditioning, causing a strain on the electrical grid and forcing even more power cuts. Beirut, however, has it better than the rest of the country, where residents can go 18 hours a day without state-provided power.

Samir Daher, the financial advisor to caretaker Prime Minister Najib Mikati, said that the electrical problem in Lebanon could be solved within a year and a half, but political infighting between divided parties has kept that from happening.

Gibran Bassil, Lebanon’s Energy and Water Minister, has promised that Lebanon will have 24-hour electricity by 2015 and has cut deals with Turkish power-generating boats, one of which was in Beirut’s port earlier this year and another of which is currently docked near the southern city of Sidon, to provide more electricity to the country. The plan, however, which was supposed to launch in 2011, started late, and it is widely expected that whoever follows Bassil into the minister position will scrap the initiative and design a new strategy from scratch. And reports from local media say that the Turkish ships will simply prevent further power outages as opposed to providing more hours of electricity than before.

Even if Bassil’s strategy were to be implemented, there is still the issue of generator operators who make large sums of money off the state’s absence. Gilbert is one of these operators. An affable man in his thirties, he lives just outside Beirut where he sells power from generators. A little while back though, Gilbert had a problem.

“There was a glitch once in my neighborhood and for some reason we were getting 24 hours of state-sponsored electricity,” he says. Unwilling to change his lifestyle of sleeping until noon, Gilbert decided to take some initiative.

“I went to someone at the electric company and bribed him to give us power cuts,” he said, cackling hysterically. “That’s how I make my money.”

Much of the country lives on generators these days, especially outside of Beirut. In Tripoli’s Bab al-Tabbaneh, 76 percent of residents make less than $500 a month, according to a report released by the UN in February. An average of around $75 of that goes to paying for generator costs.

“We only pay for the generator because we steal electricity,” said Mohammad, a resident of Bab al-Tabbaneh who preferred his last name not be used. He added that he believed the fixed cost of electricity was around $12 a month for the area.

The city’s sketchy electrical system is a drag on its economy. Photo credit: Joe Nazarian via Flickr

Still, living on a generator can be difficult. Mohammad said they can only run one AC unit at home at a time because the generator can handle a maximum of five amperes.

To avoid overloading their electric grid, residents have to run little self-created tests, like checking to see if the street lights are on so they’ll know if they’re using state electricity or power from the generator. There’s now also an app for that – Beirut Electricity Cut Off can be downloaded on Apple or Android operating systems and configured to show the scheduled blackouts both inside and outside of Beirut, though unscheduled blackouts aren’t listed.

To confront the electricity issues plaguing the country, experts and ministries have worked together to either recommend or, in some rare cases, actually implement solutions.

Georges Sassine, a member of GE Energy’s global strategy team and a former employee with the Lebanese Ministry of Energy and Water, recommends the private sector take over the state-run electric company since they only provide 85 percent of the country’s needed power, with an additional 10 percent coming from neighboring Syria.

“The electricity sector reform should adopt the private sector participation which has proven to improve access to public infrastructure services, price and quality,” Sassine wrote in a recent blog post. “The sector needs to be restructured toward a ‘middle ground’ deregulated environment where the regulator controls multiple generators and distributors with one single buyer. This ‘middle ground’ deregulated environment will be an interim step towards an ‘all level competition’ privatization form if seen appropriate later on.”

Privatization is made difficult by widespread corruption on the political level in Lebanon, but many experts like Sassine continue to fight for it. Others have begun investing in solar power.

Lebanon experiences sunny days for the majority of the year as rainy weather rarely appears outside of the winter months. This energy is already being utilized in parts of the country, including on street lamps. Absurdly, street lamps will often be seen switched on during the light of day, but cut off at night due to power cuts. In east Lebanon, however, the Transportation Ministry has set up 766 solar-powered streetlights over a stretch of 10 kilometers that automatically turn on when night sets in or the skies get cloudy. There have also been cases of farms in the same area using solar power to sustain themselves in an area where the electricity seems to be out more often than not.

But despite these clever initiatives, solar power isn’t yet used on a widespread scale. On the solar issue, Jihan Seoud of the Environment and Energy program at the UN Development Programme in Beirut told IRIN News, “The government is looking to reform the electricity sector, but mostly on the supply side. We are working with government entities to reduce load on the demand side. Reducing demand means the government can spend less on electricity generation.”