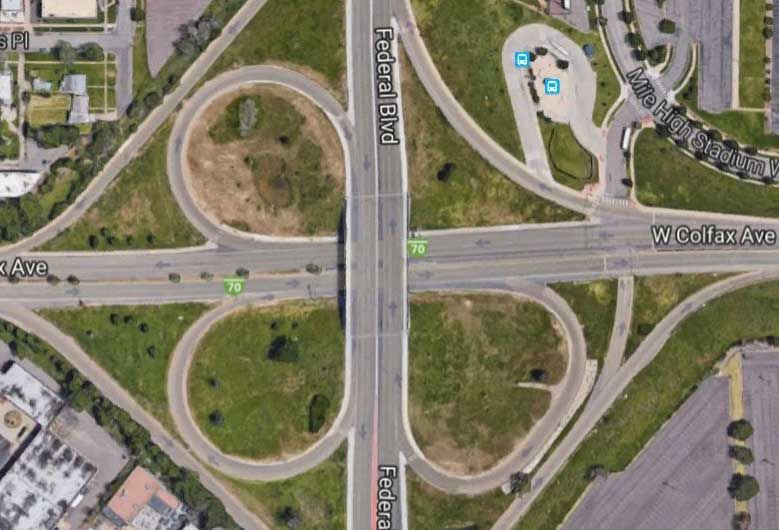 One of the most dangerous intersections in Denver—possibly in the entire state of Colorado—could be getting a makeover.

Led by a local business improvement district, the intiative known as Over the Colfax Clover is aiming to redevelop the cloverleaf interchange at West Colfax Avenue and Federal Boulevard, which the community says is unsafe for pedestrians and bikers and doesn’t get enough car traffic to justify its existence, the Denver Post reports.

An estimated 25 people walking and biking were injured by drivers around the interchange from 2012 to 2017, according to the Over the Colfax team, which includes the West Colfax Business Improvement District, WalkDenver and planning firms Michael Baker International and Critter Thompson Consulting, Streetsblog Denver said. Twenty-one pedestrians have been killed walking on Federal Boulevard in the same time period, and the area near the Colfax Avenue interchange has seen the most fatalities, the Post reported. Meanwhile, the cloverleaf carries 8,000 fewer vehicles on an average weekday than the nearby, at-grade intersection of Colfax Avenue and Colorado Boulevard, Streetsblog said in a separate post.

On Sunday, June 3, Over the Colfax shut down the southwest quadrant’s ramps for a pop-up festival featuring live music, food, and an opportunity for community members to vote on what they want to see happen to the interchange over the longterm.

“Having a fun event in the neighborhood—in the actual space—draws attention not only to the decision makers but also to the broader community so we can really boost how much influence we have and make a splash,” Anne Kuchenmeister, a planner with Michael Baker International, told Streetsblog.

Long-term, the BID is still considering options: Demolish the bridge that elevates Federal Boulevard above Colfax? Turn the bridge into a one-way street? Any long-term solution is at least a decade, possibly two, away, Kuchenmeister told the Post.

Removing the cloverleaf interchange would also free up 29 acres of land, the BID said. Neighbors voted for that land to be turned into a community corridor, community center or new homes.

Both streets are state highways, but the Colorado Department of Transportation is open to the BID’s suggestions. CDOT spokeswoman Amy Ford told the Post that “We are absolutely as an agency open [to the idea] and have started thinking about how we reimagine the Federal and Colfax interchange.” In fact, CDOT started its own thinking on the interchange a year or two ago, Ford said. Reconfiguring the interchange is projected to be very expensive (CDOT didn’t specify how much exactly), so it (and Over the Colfax Clover) is looking for a public-private partnership to help fund any future project.

The next steps, the BID said, are to fund any interim design solutions like speed humps, as well as invest in a long-term engineering study. If all goes according to plan, speed humps or pedestrian signs could be installed as early as 2019.