Get Out, Stay Out: Philadelphia Program Looks to Reduce Recidivism – Next City

Get Out, Stay Out: Philadelphia Program Looks to Reduce Recidivism 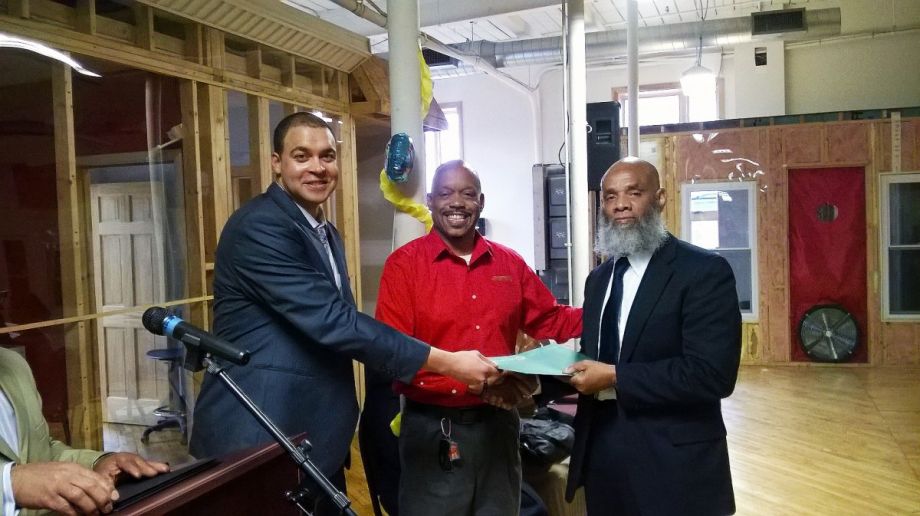 Finding a job when you’re released from jail isn’t easy. For one, there is the stigma. And, depending on how long you’ve been locked up, the skills necessary for living wage jobs may have drastically changed. That’s why reentry programs are important for workforce development and reducing recidivism.

Since 1992, Connection Training Services (CTS) has worked to give the formerly incarcerated of Philadelphia — where the recidivism rate is 65.3 percent and three-year reincarceration rate is 41.1 percent — the skills they need to land on their feet. Last week, CTS graduated the first crop of participants in their new federally funded Training to Work program.

CTS has run myriad reentry programs for 22 years, but launched Training to Work last September as a comprehensive course to give formerly incarcerated men and women — convicted of both violent and non-violent crimes — vocational skills and job preparation. Training to Work joins with partners to provide classes and certification in everything from fiber optics to plumbing. Last Thursday, 10 former inmates graduated from a class conducted by the Energy Coordinating Agency (ECA).

Reginald Bailey, a 65-year-old West Philadelphia man who said he had spent most of his adult life behind bars, went through ECA’s plumbing program. Before I spoke with him on the phone, he had been working with CTS’s employment specialists looking for a job as a plumber’s helper in the Philadelphia Water Department. Bailey was elated to have his certification — which will make him much more marketable to potential employers — but he learned about more than simply plumbing.

While ECA provided the vocational training, CTS works with participants on everything from interview skills to what program director Janet Chaney called “How to Dress for Success.” Having spent a good deal of his adulthood in jail, Bailey was unfamiliar with the machinations of the job market.

This is not something that many of American prisons teach. When we spoke with Columbia professor Carl Hart last fall, this was something he stressed. “Think about the amount of money we spend in prisons,” he said. “We’re not giving people any skills. We’re housing them under the supervision of people who don’t know anything about human development, nor do they care about teaching or education.”

Institutions like CTS help to cover the prison system’s blind spots. The job training is only one facet, though. Jerome Davis, a 42-year-old who graduated from ECA’s weatherization program, said his work with the CTS staff instilled a sense of confidence in him that he lacked the last time he had been released form jail.

“You know, I was locked up previously,” he said. “I feel way more confident now.”

Chaney, who has been with CTS for five years, said that while Training to Work obviously focuses on getting previously incarcerated people to work, it gives graduates a stable platform that many former inmates need. And a job out of prison can go a long way in stitching up old relationships.

“One thing that I think getting jobs does,” Chaney said, “is that it produces and fosters reunification of families.”

But they have to graduate first. After participants complete their vocational training, they return to CTS where they go through the aforementioned interview preparation. Those enrolled show up to CTS Monday through Friday, from 9 to 3, and work with mentors on Fridays. “The mentors talk to them about everything,” Chaney said. “From how to be a father to how to interact on the job.” One recent graduate from ECA is already gainfully employed.

Chaney said former graduates of other CTS programs still come back to visit. And if Training to Work alums lose their jobs, they’ll always be able to turn to the employment specialists who helped them in the first place. But CTS can’t do everything. It’s up to lawmakers — in Pennsylvania six in 10 released inmates are back in the system within three years — to take notice and follow their lead.

Davis, who is hopeful that CTS can get him on the right track, said that while he enjoyed working with his hands during his vocational training, it was much more than that. He embodies the type of attitude that reentry programs instill in former inmates.

“They teach you a lot of people skills here,” he said. “And they just teach you about not going back into the same cycle you went into before.”