From Progress to Problems, a Close-Up on One Obama Promise Zone – Next City

From Progress to Problems, a Close-Up on One Obama Promise Zone 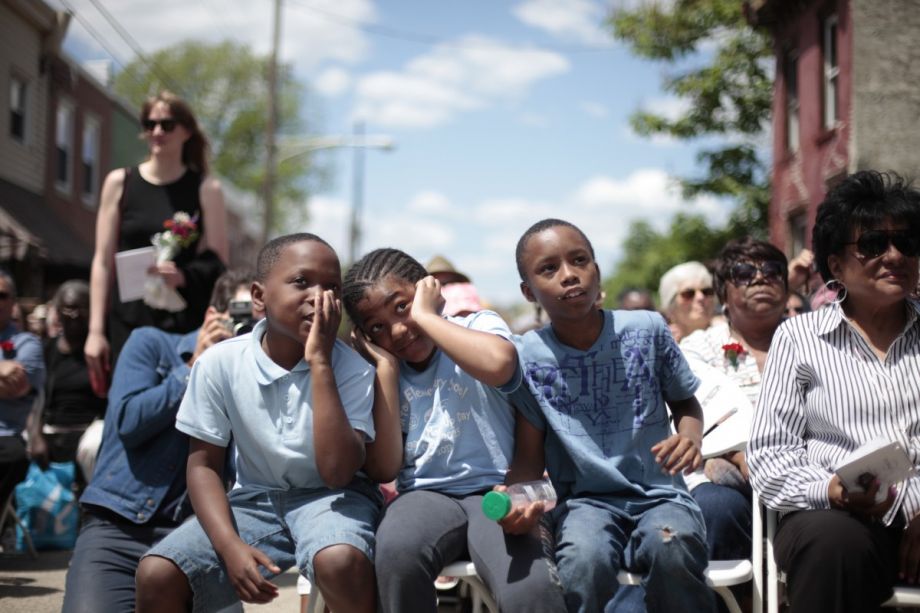 Kids looked on as a house was demolished during a memorial project in Philadelphia’s Mantua neighborhood. President Obama designated Mantua as a Promise Zone. (AP Photo/Jessica Kourkounis)

It’s been almost six months since President Obama formally inaugurated his Promise Zones anti-poverty initiative, which designated five struggling communities — including one in Philadelphia — for special federal preferences. The designations will last for a decade so it’s much too early to gauge the long-term viability of the program, but with 15 more zones in the pipeline, supporters and critics alike are paying close attention for signs of success or failure.

The Promise Zones will rely on a mixture of public and private capital, and one early wrinkle involves the enactment of tax incentives designed to spur investment and hiring. Outgoing Housing and Urban Development Secretary Shaun Donovan has warned that the initiative can’t reach its full potential without the tax breaks.

The administration identified two tax breaks in its Fiscal Year 2015 Revenue Proposal that it wants to see passed: an employment credit for businesses that hire zone residents, and the enactment of bonus depreciation for property used as part of an investment in the designated Promise Zone areas and their eligible surroundings.

Obama has more than 18 months left in office to guide the tax credits to fruition. But unfortunately this will require an act of legislation from a Congress increasingly disinclined to support any program that could make the President look good.

At a recent event on the Promise Zones sponsored by the Center for American Progress, Cecilia Muñoz, the director of the White House Domestic Policy Council, said the administration is holding out hope the program’s legacy will involve congressional action, but she acknowledged the political difficulties involved.

“We’re not in an environment where we get receptivity to anything that comes out of an administration official’s mouth, least of all the President’s,” she said. “But this is not a partisan thing. We’re in a conversation that’s being led by folks on both sides of the aisle … and this is a proposal that frankly draws heavily from ideas that have been put forth from both sides of the aisle.”

Indeed, tax breaks are a cornerstone of GOP economic policy — and parts of the Promise Zone program are remarkably similar to the “Economic Freedom Zones” envisioned by Sen. Rand Paul. But that won’t necessarily shield the proposal from pushback from members of the GOP’s Tea Party wing. Sen. Ted Cruz has already used the Promise Zone announcement as an opportunity to rail against the Affordable Care Act and call for abolishing the IRS.

Still others have expressed concerns that concentrated investments of private capital in the nation’s most vulnerable neighborhoods could lead to accelerated gentrification and could actually displace poor residents.

Some residents of Philadelphia’s Promise Zone, which centers on the neighborhood of Mantua, have echoed those concerns. At the recent “Funeral for a Home” event — which memorialized the demolition of an abandoned Mantua rowhome — Rev. Harry Moore lamented the gradual encroachment of the University of Pennsylvania and Drexel University into the community, and other attendees said they have already seen signs of gentrification.

But Mantua is also a neighborhood with a strong community identity and a history of joining ranks against outside threats. Home to the legendary grassroots anti-drug crusader Herman Wrice, who died in 2000 — and, more recently, groups like the People’s Emergency Center and Rick Young’s Mantua Community Improvement Committee — the neighborhood has long confronted the realities of crime, decay and a lack of opportunity with a deeply ingrained culture of residential activism.

Eva Gladstein, executive director of the Mayor’s Office of Community Empowerment & Opportunity, which is tasked with overseeing the implementation of Philadelphia’s Promise Zone program, says this makes Mantua fertile ground to capitalize on the program.

“A lot of work has been going on here with support from institutions like Drexel University and local resident groups. So there’s a strong community planning network already in place,” she said. “At this point the Promised Zone is really about aligning these resources, so to the extent there was already things going on, it’s really about having a shared commitment among all these distinct agencies.”

In her early work to get the initiative off the ground, Gladstein has set about parlaying these existing community initiatives into broad-based community revitalization. To this end, she says much of the past five months has been dedicated to getting the right people at the table.

On May 28th, OCEO hosted its fifth Shared Prosperity community roundtable, which brought together roughly 60 stakeholders and residents, together with representatives from city and federal government, to share ideas and pinpoint opportunities for greater collaboration.

“This is the start of a long-needed conversation about the Promise Zone,” DeWayne Drummond, a president of the civic association, told a Philadelphia Inquirer reporter. “It’s a step up on climbing this ladder we’ve got to climb.”

To date, OCEO has organized six committees to examine goals and objectives based on work that has been going on in the community and to identify early action items. And Mantua is already the beneficiary of two competitive federal grants under the Neighborhood Revitalization Initiative totaling $850,000. Gladstein says work is under way to use that money to increase access to early childhood learning, and improve public safety through strategies such as improved lighting, the rational deployment of officers, and training residents in crime prevention.

Meanwhile new applications have been filed and are pending for funding for programs to reduce teen pregnancy, help working mothers with infants, provide job training for ex-offenders and increase early childhood literacy.

Gladstein says the city has also provided $645,000 in matching funds to apply for a grant from the Corporation for National and Community Service. CNCS provides money for organizations committed to strengthening their communities through volunteering, and it has already made a commitment to provide five full-time AmeriCorps VISTA members to each Promise Zone.