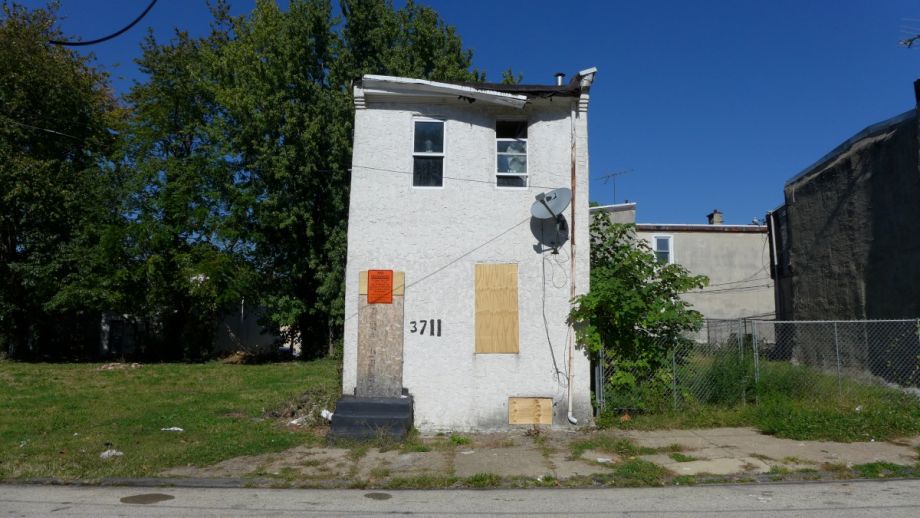 Philadelphians held a “Funeral for a Home” at 3711 Melon Street, above. (Photo: Patrick Grossi)

In Philadelphia on Saturday, a drill-team-led funeral procession made its way from 3711 Melon Street in the city’s Mantua section behind a huge black Dumpster. The Dumpster was the coffin. Inside were remains of a house — roof debris from the about-to-be-demolished Mellon Street property. More than 300 mourners gathered and marched in memory of the home.

Temple Contemporary, a gallery affiliated with the university’s Tyler School of Art, steered the plans for the building’s “last rites” in collaboration with civic advocates, neighbors, researchers, artists and the church around the corner, Mount Olive Baptist. The event, “Funeral for a Home,” was a singular blend of public art, civic engagement and heritage preservation. The project won a $160,000 grant from the Pew Center for Arts & Heritage.

In cities across America, the demolition of houses like 3711 Melon Street have become commonplace. The number of vacant units in the United States swelled between 2000 and 2010 by 44 percent, according to a Brookings Institution study. Cleveland saw 6,000 buildings demolished between 2009 and 2013, and between 10,000 and 15,000 blighted structures remain. The Detroit Blight Removal Task Force stated in a report last week that the majority of the city’s 80,000 blighted buildings “likely need to be removed.” The Philadelphia memorial invited attendants to treat a scene that many city-dwellers may consider unremarkable, as the passing of a life itself. The home was 142 years old.

The project drew inspiration from photographer Jacob Hellman, who organized a small memorial with fellow artists when he discovered the last house standing on a North Philadelphia block was soon to be demolished, explained Steven Dufala, who worked as lead artist on “Funeral for a Home” alongside his brother Billy. Steven said the following message was the most important: “That people can control what’s happening in their neighborhoods. And should.”

Funeral For a Home from Next City on Vimeo.

Michael R. Allen, the director of the Preservation Research Office who recently explored trends in historic preservation for Next City’s Forefront, says the memorial is in step with newer movements in the field, “creating a space in which memory can be preserved, while the house itself disappears.”

When he first heard the idea for “Funeral for a Home,” said Jameel Roberts, “of course it was odd — memorializing a house — but we got on board with it. The Mount Olive musician served as the organist at Saturday’s memorial. The song selection was especially clever: gospel classic. “There’s a Leak in This Old Building” was a highlight.

Funerals are more commonly referred to as home-goings in the black church, with services celebrating the soul reaching heaven. “Funeral for a Home” organizers didn’t shy from that, or most black church traditions. The only thing that strayed from the norm was that Rev. Harry Moore, preaching with the home and excavator behind him, was mindful not to let time escape him. The excavator, like the ushers, wore a black armband. The demolition crew waited until after the procession and repast to finish razing the building.

The Dufalas designed a long floral blanket, which crowned the roof. Wreaths were placed on nearby vacant lots, memorializing houses that had already fallen.

The morning’s speakers paid homage poignantly, in turns honoring the house and the neighborhood. (President Obama designated Mantua as a Promise Zone in January.) The pastor recalled a charged history of displacement, referring to negative impacts of the University of Pennsylvania’s expansion. Nearby Drexel University revealed a new redevelopment plan last year that has caused Mantuans to fear that students will further encroach.

Ramona Winans, a lifelong resident, said she’d seen the signs of gentrification, which made the day’s events all the more important.

“I have 20 grandchildren,” she began. “Even though [the neighborhood] is being refurbished, they need to know the history of it because that’s what keeps you going.”

When 3711 Melon was built, the area was an Irish stronghold. During the Depression, Jewish and Italian families would follow. Through the ’40s and ’50s, the neighborhood shifted to the African-American enclave it remains today. Leona Richardson bought the house in 1946 and raised her son, Roger, there. She lived on Melon Street some 50 years before moving due to ill health. Richardson passed away in 2002. Her nieces shared memories of their aunt and the home during the service.

Allen believes that while it may be harder to organize events and demonstrations in honor of ordinary homes, preserving these buildings are crucial to cities everywhere.

“They make up the lifeblood of urban neighborhoods, and their erasure — that’s what we feel the hardest,” said Allen. “Those are the houses our ancestors grew up in. We may be dazzled by the greater works of architecture, but it’s really these ordinary, common stock residential buildings where we can see ourselves more clearly.”