Can Philly’s Next Mayor Fix the Police Department? 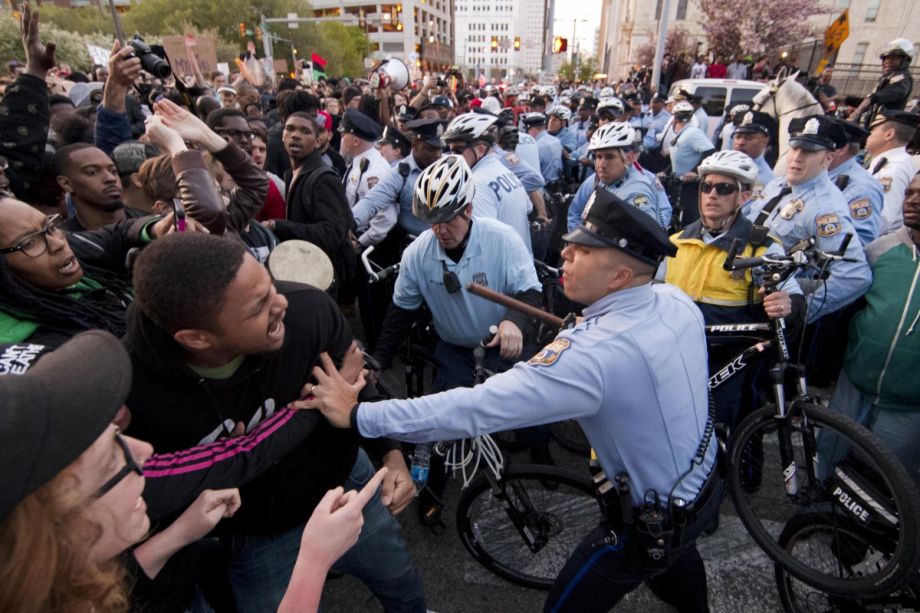 On April 30th, Philadelphians rallied to show solidarity with Baltimore residents who have been protesting the death of Freddie Gray in police custody in their city. (AP Photo/Matt Rourke)

Philadelphia has 18 months to begin instituting 91 Department of Justice recommendations to reform a troubled police department, and there are eight months left in Mayor Michael Nutter’s second term. After a March DOJ report cited “serious deficiencies” in Philadelphia Police Department policies and practices, Nutter and Police Commissioner Charles Ramsey promised to work aggressively to fix the problems that have long plagued the PPD.

But with the DOJ calling for the department to take “evolutionary steps in its approach to all interactions with the public,” the clock will most certainly run out on Nutter’s tenure before the job is done. How the next Philadelphia mayor responds to that inherited call — and to what extent he or she will prioritize reform — could shape a legacy.

On Wednesday night, six mayoral candidates gathered at a public forum in West Philadelphia and offered a glimpse of what that shape may be.

But first, they were asked about “Brandon’s Bill.”

Just last week, Tanya Brown-Dickerson filed a wrongful death suit against the city in the name of her son Brandon Tate-Brown, who was killed in an altercation with Philadelphia police in December. Brown-Dickerson has been denied the names of the officers who killed her son. “Brandon’s Bill” would require officials to publicly release details of officer-involved-shootings, including the identities of the officers involved.

All but one candidate said they would support the legislation she’s lobbying for, with Williams expressing a need to balance that transparency with officer safety.

The next mayor will also face the responsibility of following through on the rollout of body cameras, which each candidate vociferously supported. Throughout the evening — just one night before about a thousand Philadelphians marched to protest Freddie Gray’s death in police custody in Baltimore — the candidates also hit on ending the schools-to-prison pipeline (Williams, Bailey), equitable financing for the Police Advisory Commission (Kenney), union barriers to reform (Diaz), and the need to target reform efforts on the conditions that lead to crime (Oliver, Street).

There was broad consensus about the glaring need to reform police practices — but wanting reform and being able to achieve it are two different things.

Case in point: Each candidate remarked on the need to end stop-and-frisk practices that unfairly target people of color. However, even under a four-year-old court mandate to do just that, the PPD has failed to make significant progress.

Oliver, a former gas company exec who was once Mayor Nutter’s spokesman, said it best when he described stop-and-frisk as a symptom of other, more deeply rooted issues.

“You can change the nomenclature all you want, but the attitudes underlying stop-and-frisk is where the problem is,” he said.

For Oliver, the root problem is “a culture of disrespect” for communities of color, and implicit bias that leads to the over-policing of minorities. He proposes sensitivity training and a commitment to improving cultural competence among police.

One of the more radical fixes proposed is Williams’ idea to add a “character clause” to the PPD contract to weed out biased officers. The State Senator said such a clause would reflect a zero-tolerance policy for hate speech, with officers who breach the rule eligible for termination.

In contrast, Kenney — a former city councilman who has refused to endorse that Williams proposal — chose to focus on the mechanics of profiling as police practice. He said his administration would prohibit quotas for stops and require all officers to undergo “reasonable suspicion training” covering the rudiments of the Fourth Amendment.

The candidates also took turns pledging their commitment to expanding community-oriented policing (COP). Diaz, in particular, emphasized that the core of his reform efforts would involve expanding community policing initiatives that force officers to interact face-to-face with their constituents.

In statements and policy documents, frontrunners Kenney and Williams have each promised to bolster the PPD’s foot patrol program, which was launched in 2009 and has shown early promise in pilot neighborhoods. Perpetual mayoral candidate Street — taking an overly literal interpretation of community policing — proposed hiring ex-offenders to work as civil-service security guards in their neighborhoods.

Bailey’s proposal to give officers paid time and autonomy to engage in non-policing-related activities with members of the community is refreshingly innovative. (The Republican’s sure to be an also-ran so hopefully whoever gets the Democratic primary nod on May 19th was taking notes.)

What’s not clear is the extent to which each candidate has internalized exactly what community policing looks like, and what should be its goals. Municipalities (including Philadelphia) frequently cite lower crime rates when touting the success of their COP programs, despite research showing that police legitimacy is engendered by perceptions of fairness and procedural justice more than notions of police effectiveness.

The discrepancy has led to an over-emphasis on enforcement strategies in the model of “broken windows.” Asked by the hosts to comment on the legacy of broken windows, all six candidates offered versions of the same answer: The theory has failed to live up to its promise and may be doing more harm than good. But changing the script will not only require a radical shift in the way police enforce the law, but in which laws they choose to enforce.

How, and indeed if, the next mayor of Philadelphia can pull that off remains to be seen. But if there was one takeaway from this week’s forum, it’s that police reform promises to be a singular issue for a sizable portion of the electorate this year. Candidates who are tempted to diminish that reality do so at their own peril.

The forum was hosted by the Philadelphia blog The Declaration in partnership with Christopher Norris, CEO and editor of news and event company Techbook Online Corporation.