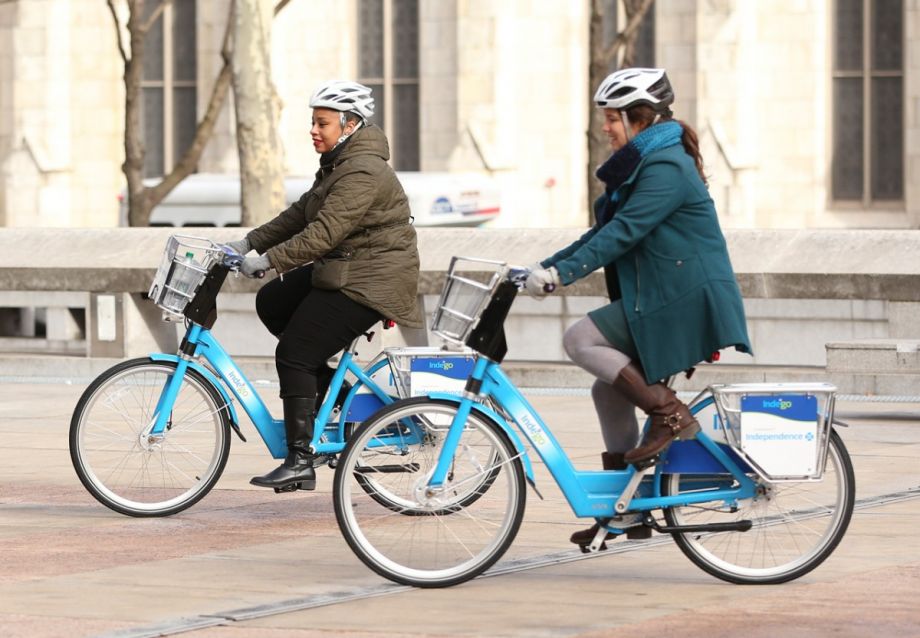 Philadelphia’s bike-share service is taking a step forward on the evolutionary tree this week, with the arrival of electric-powered pedal-assist bicycles to its fleet. Indego, the city’s bike-share service, started a two-month trial run of the new “e-bikes,” PlanPhilly’s Jim Saksa reports.

“I thought they were awesome,” said Chamarra McCrorie, a city employee who regularly rides her single-speed bike to work, according to PlanPhilly. “The ride was very smooth, the speed picked up immediately, and I think it’ll be a great way for people to get around the city, especially in those parts that are more hilly.”

Pedal assist e-bikes, which assist riders with an electric motor that turns on only while they are pedaling, are gradually making their way into bike-share fleets across the country, though not always without controversy. E-bikes arrived for a trial run in the nation’s capital in September and had a trial run in select NYC neighborhoods over the summer.

The arrival of e-bikes in NYC required the city to make them legal first, but the legislation to do so upset some who charged that the reforms left out restaurant-delivery workers — who often use DIY throttle-powered bikes because they’re more affordable to convert than purchasing their own electric-powered pedal-assist bikes.

“My coworkers and I have been criminalized for using e-bikes,” delivery worker Clemente Martinez, 44, said at a hearing earlier this year, according to StreetsBlog NYC. “On the other side, my boss is also demanding that I use e-bikes.”

The cities of Sacramento, West Sacramento and Davis — where the nation’s first bike lanes were painted — lept straight to e-bikes when their collective bike-share system launched earlier this year.

As Next City’s Josh Cohen reported last year, “though the Sacramento region is quite flat, the pedal assist will be a major boon in the summer when the temperatures soar and even the hardiest bicyclists are loath to travel under their own power.”

“We have really hot summers here,” Jim Brown, executive director of Sacramento Area Bicycle Advocates, told Next City. “I don’t have a car. I travel by bike. I’m never eager to head out on a bike in the middle of the day in the summer.”

Dan Fuchs, president of Bike Davis, told Next City he expects the e-bikes to draw in users who might not otherwise consider traveling by bike.

“I think it’ll be revolutionary for a lot of people,” Fuchs said. “People don’t know about e-bikes in the U.S. … Davis’ older population could be well served by them.”

Back in Philly, Indego will assess data after two months to understand how many e-bikes to ultimately add to the fleet, and perhaps how much of a premium to charge over conventional bike-shares, PlanPhilly reported.