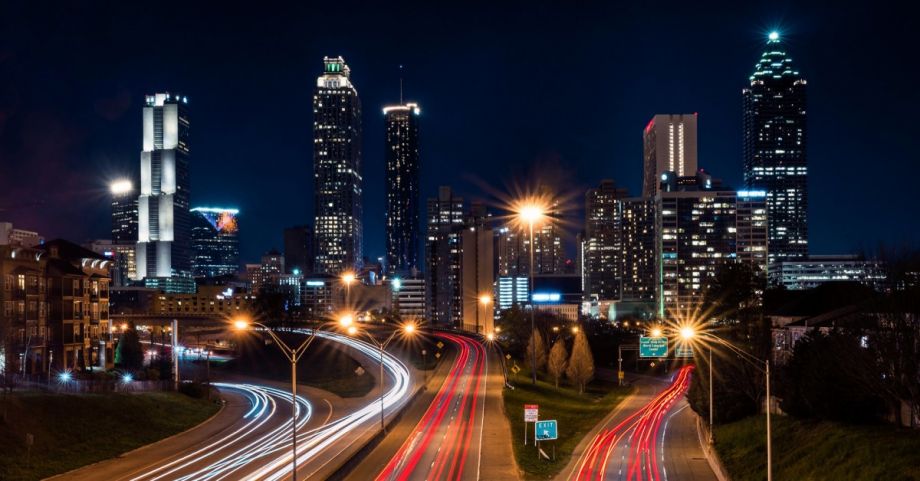 Farokhi has worked since 2018 to introduce the city to participatory budgeting, a process that allows residents to propose and vote on government-funded projects.

“I’ve always been struck by the positive outcomes that result when government invites residents and citizens to be part of the decision-making process. Participatory budgeting is a really compelling way to do that,” he says. “I represent roughly 50,000 people, and I hear from the same 250 people all the time. So there’s all these people you never hear from.”

But in summer 2019, Farokhi came across a separate store of money that sprung participatory budgeting forward in Atlanta. He found about $1 million in available capital dedicated to transportation infrastructure improvements. The money also happened to be set aside for the downtown portion of Farokhi’s council district. With that cash in place, he launched Downtown Decides — the first participatory budgeting project in Atlanta’s history.

It began by asking Atlantans what transportation projects they wanted. In December 2019 and January 2020, Farokhi’s district accepted proposals online and talked with people at MARTA transit stations and on the street, as well as with businesses and neighborhood groups. By the end, the city had received just over 110 project proposals, mostly from people with no transportation or planning background.

Farokhi and the city vetted the projects to see which fell in the designated downtown footprint, were similar enough to be merged and cost under $1 million. They also evaluated the legality of projects. For example, one initiative involved MARTA, a transit authority that is separate from the city, so the proposal was ruled out. Atlanta’s Department of Transportation, which is in its first year of operation, then helped attach a price tag to each project.

All of this has led to an online vote on 33 transportation projects. They include repainting a concrete median island so it’s more visible to people on bikes and scooters ($3,400), adding more pedestrian-only streets ($15,000) and creating bike and scooter lanes along busy Peachtree Street ($225,000). The last day of voting is Sunday, May 31.

As a voter chooses projects, a progress bar displays how much of the $1 million fund is left to spend.

“We set up voting in a format that forces people to make the same hard decisions that government has to make,” Farokhi says. “You have a limited amount of money and more projects than those funds can pay for, so you have to prioritize projects based on the funding you have.”

Having a progress bar of funds available also provides people with a lesson in trade-offs, says Hollie Russon Gilman, a political scientist who published a book on participatory budgeting. (She has also written for Next City.)

“People understand, ‘Oh, wow, this is more expensive than I thought,’ or ‘This has a use life only for two years. I need to find a project that has a five-year use life,’ or ‘This thing I thought was local funding is actually federal funding,’” Gilman says. “These are all really valuable opportunities for people to have a hands-on civic education.”

As of May 27, 2,099 people had voted in Atlanta. The city planned to do in-person voting in addition to online, but COVID-19 put a stop to that. So to get the word out, Atlanta has reached out to business associations, bicycle advocacy groups, professors at Georgia State University and other connections.

Peter Mocker, who lives near downtown, voted online after hearing about it on social media. “I kind of worry about the digital divide, meaning folks that don’t have solid or constant access to be able to go online to vote,” he says.

Still, Mocker says the vote is a neat experiment. “It’s a good first step for how public participation should be brought in,” he says. He adds that the government must make it easy for people to submit comments outside of public meetings, which can be hard for people to attend.

One key decision that Atlanta made was whether to limit voting to downtown residents. It ultimately decided to open the vote to anyone who lives, works or visits downtown since the money for this participatory budgeting project comes from sales tax that’s generated by the thousands of people who interact with the area every day.

“You get a much broader diversity of opinion. You don’t have one small group of people that drives a project through that may or may not be what a broader group of residents and visitors think is good,” Farokhi says. “And there’s an equity issue. I think people who pay into these funds may not be able to afford to live in the city. They use the streets and the sidewalks, and they should have a say as well.”

Atlanta will announce the winning project proposals in June, within a week after closing the polls. Then it will set the completion timelines for each project, aiming for an implementation in 12 to 18 months.

“Participatory budgeting is only as successful to the extent that projects are completed on time and with some speed,” Farokhi says. “If people are waiting two, three, four years for projects to get completed, they’re not going to believe in this process and participation decreases.”

He hopes that Atlanta’s first project in this area increases interest in enacting participatory budgeting across the city. Farokhi says his fellow councilmembers are excited to run their own pilot programs.

Participatory budgeting doesn’t require a city to add money to its budget — just open it up to public decision-making.

“So we can do this at any stage, even if our budget shrinks as many cities, including Atlanta, will experience because of COVID-19,” he says. “In today’s environment of discord and, frankly, distrust in government, participatory budgeting is an incredibly useful tool to rebuild trust between people and government and to give people a voice.”