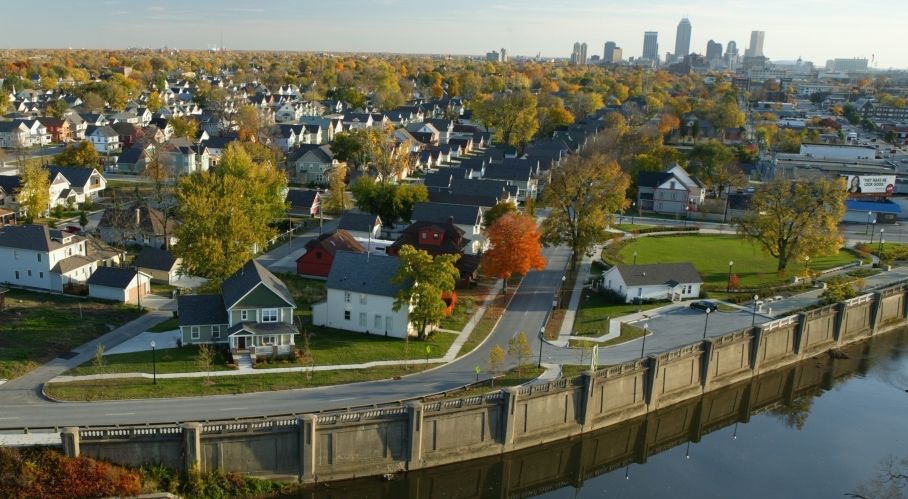 “We were all just taken aback,” says Derek Hyra, a researcher on neighborhood change.

They’re talking about an ad on the back of last month’s Urban Times, a local Indianapolis publication.

“Real estate prophets said build here, so the people came and they built, and all was good in the kingdom,” reads the full-page ad by Flock Realty for their development, ZMC Urban Homes, in the Indianapolis neighborhood of Fall Creek Place. “It was once an unseemly place filled with unholy habitats and vice lords. Thusly people banded with bureaucrats and rebranding Oracles who ordained Dodge City be henceforth and forever known as Fall Creek Place.”

The old Dodge City was a predominantly black neighborhood that had suffered disinvestment and neglect. It was rebranded Fall Creek Place as part of a federally funded urban renewal project in the early 2000s. Black renters were displaced en masse, despite promises that the infrastructure upgrades and new housing would benefit them too. Now, it’s a predominantly white, affluent community. The Flock Realty ad seems to imagine that white community as its audience, and to revel in what the displaced black community has lost.

“With blessing of the banks, brokers and bureaucrats ZMC Urban Homes began building new homes for the blessed who believed urban living could be holy, hip, righteous, and upscale,” it goes on. There’s a photo of a vacant lot, atop a string of photos of brand-new homes. In a neighborhood where Trulia estimates an average listing price of $218,116, Flock Realty’s ad boasts of “kingdoms” that start at $636,000.

“It’s just code words for getting rid of the black population, the poor blacks there,” says Paschall, also known as WildStyle DaProducer. He’s lives about a mile and a half from Fall Creek Place. When he tried to buy a home there in 2002, when crime was still a major concern, he couldn’t get a contractor to come out and give an estimate. The man drove right past the house.

“Now it looks like a hipster gathering spot,” says Paschall, referencing bars, art galleries and coffee shops. That wouldn’t be a problem, if black residents hadn’t been so completely shut out of the new neighborhood. Paschall points to an article from 2002 that praised the transformation of Fall Creek Place, while also noting that though displaced renters were supposed to receive assistance to relocate or counseling to purchase a home in the new developments, only one-tenth of buyers at that point were black.

A friend sent Paschall the Flock Realty ad — the Urban Times only goes to a few neighborhoods — and Paschall posted a photo on Facebook, where it quickly sparked outrage. People pointed to another Flock Realty creation that features a photo of a carton of eggs and Star Wars’ Yoda. The text, written in the voice of a disgruntled apartment-dweller, includes this line, “They didn’t warn me about the thin walls, late night banging, insomnia, and the smell of cumin, curry, and oregano in the halls.” But it was the ad about “unholy” habitats that engendered the most disgust. 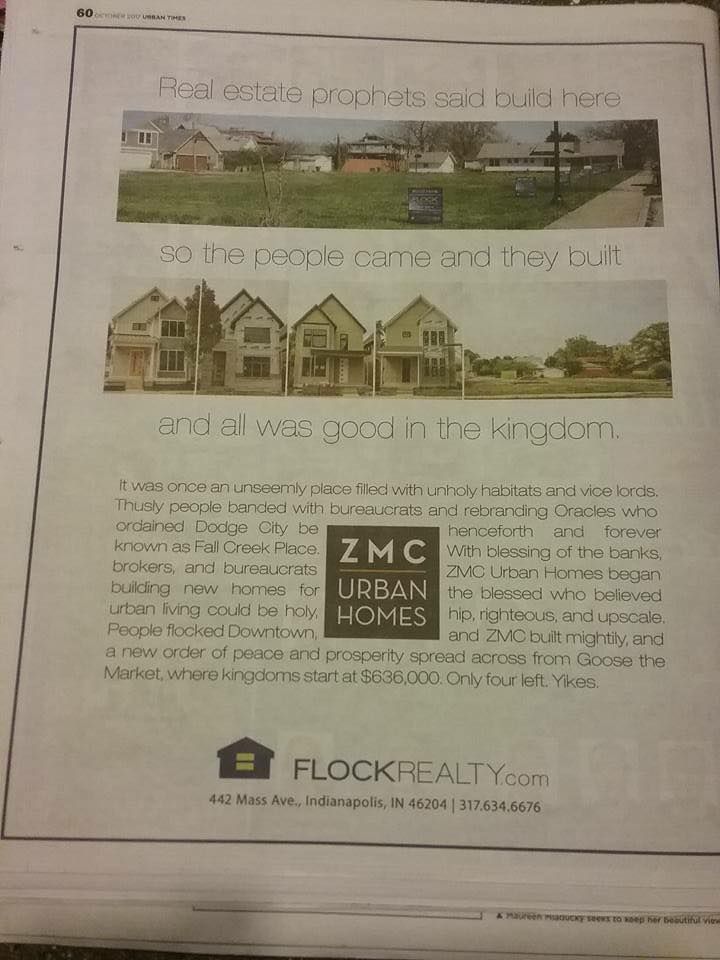 “It’s very specific to this one neighborhood, and it’s very much rooted in the history of this neighborhood, but the reason it’s problematic is it represents a strategy you see being implemented across the country,” says Meredith Brickell, artist and founder of the House Life Project in Indianapolis. “It’s really this perfect document of what a lot of us are struggling with.”

The racism of the ad is shocking because it’s so explicit, she says, not because it’s uncommon. In fact, Paschall jokes he wants to thank Flock Realty for running the ad. To him, it’s just evidence that what housing advocates have been saying for years is true.

After the backlash, owner Kurt Flock issued an apology. Turns out he’d written the ad himself, and claims until it was pointed out to him, he didn’t see the racial implications. But to many, including Brickell, the apology is beside the point. “If people with this much power are not able to recognize this bias, that’s a big concern for me,” she says. “[The ad] assumes that what we want is the same thing that all these other quickly developed, gentrifying neighborhoods have. It’s the dominant white culture’s idea of success.”

Hyra, who studies neighborhood branding, particularly how black neighborhood culture is cherry-picked to broadcast a certain brand of cool while ignoring the systemic racism and disinvestment, was also shocked by the ad’s audacity, but not its subtext.

Look at one developer’s attempts to label a swath of upper Manhattan “SoHa,” as in “South Harlem,” or the Crown Heights bar owner selling 40 ounces of rosé out of paper bags. “It’s commodifying elements of black culture and identity and it’s marketing them, but it’s not dealing with the issues of real concentrated poverty, of discrimination, of segregation,” says Hyra.

The ad, says Hyra, fits into a long history of developers devaluing neighborhoods where people of color and low-income people live, so they can buy low and sell high. All at the expense of people already being systematically denied opportunities through redlining and discriminatory banking and employment practices. It’s an age-old story, but one that goes largely untaught in this country. “Until you educate people about that, they’re not going to see some advertisement like that as racialized or insensitive or racist,” says Hyra.

And indeed, for all the people shocked by the ad, there were also a sprinkling of Facebook commenters tossing out “How is that ad racist? It never mentions race.” Paschall hopes the ad sparks real conversation among city government, nonprofits and developers, but concedes the ad can only go so far without more education.

“I honestly feel like if it doesn’t convey that to them,” he says, “they’re not going to see it.”