NYC Has a Plan to Push the Pedal on Buses 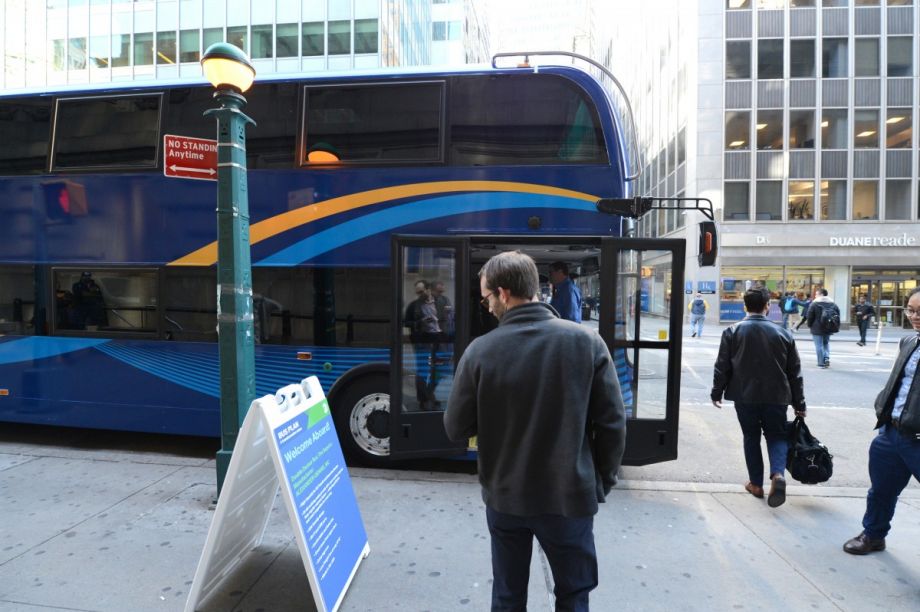 As part of an overhaul of its bus system, NYC plans to add double-decker buses along express routes. (Credit: Marc A. Hermann/MTA New York City Transit)

Bronx resident John Sattaur relies on city buses to go practically everywhere, including work. He takes three different buses to get to his job at the New York Public Library, which is less than four miles away from his apartment. On a bad day, his roundabout commute takes him an hour and fifteen minutes each way — not surprising, given that New York City buses are the slowest in the country.

“It’s a crapshoot. I don’t know what the day is going to hold,” Sattaur says of his unpredictable bus commutes.

New York’s Metropolitan Transit Authority (MTA) has unveiled a plan for a complete overhaul of NYC’s ailing bus system — including a redesign of its approximately 300 routes — that promises to improve straphangers’ estimated two million rides each weekday. The multi-year bus plan features a wide-ranging set of initiatives intended to modernize the city’s bus fleet and ameliorate service across the five boroughs.

Among the plan’s commitments: increase inter-neighborhood connectivity by modifying bus routes; give buses more priority on city streets with dedicated bus lanes; accelerate passenger boarding; step up traffic enforcement; and provide more real-time information about bus service. Zero-emissions vehicles and double-decker buses will be introduced to the existing fleet. The MTA’s NYC Transit subsidiary — led by President Andy Byford, who took the helm in January — plans to roll out these new initiatives by 2021 or sooner.

“We’re extremely happy. It’s an ambitious plan that is looking to change the way things are operating,” says Stephanie Burgos-Veras, senior organizer at the Riders Alliance, a local membership-based organization with a network of about 50,000 transit advocates. “The key component for this redesign to go well is to make sure there is a huge community engagement component, so that [bus riders] share their experiences and what it is they need their buses to do for them.”

Services that don’t require city approval or coordination will be the most feasible to implement, Burgos-Veras says. For example, the MTA can ensure that the buses’ arrivals at each stop are more evenly spaced apart by having them depart from bus depots on schedule.

Frequent bus delays have caused Eastern Queens resident Natasha Saunders, who runs a cleaning business, to utilize a ride-sharing app for getting to and from the Long Island Railroad, where she catches the train to Manhattan. She is not alone in abandoning the buses: citywide ridership has declined by 14 percent over the last decade.

“I don’t take the bus anymore, ‘cause I actually need to get to where I’m going on time,” she says.

By late 2020, the plan also promises to establish all-door boarding and to install a new fare payment system on its entire bus fleet that will allow riders to “tap and pay” using their Metro Cards or smartphones. And, over the course of this year, all new city buses and 1,000 existing buses will be equipped with digital screens that notify riders about next stops and service changes, according to the plan — something Riders Alliance has been asking to improve.

With respect to new services that require collaboration with the city’s Department of Transportation, such as expanding exclusive bus lanes around the city, Burgos-Veras worries that political hurdles could get in the way of timely delivery. Bus-only lanes could prove controversial, since private car drivers are loathe to lose their share of road space. “It is very easy for things like this to get very difficult if the mayor doesn’t stand behind it,” she says. “We just want to make sure that the city isn’t refusing to collaborate or decide to work at a slower pace than the MTA.”

Other aspects of the plan that involve the city — such as expanding transit signal priority for buses — could also take time to implement. Transit signal priority could involve using sensors to detect when a bus is approaching, causing the traffic signal for the bus to extend its green or change earlier to green; or it could involve entirely separate traffic signals for buses in exclusive bus lanes.

When asked whether the Department of Transportation will support the bus plan’s implementation, assistant press secretary Lolita Avila says, “[The department] sees the all-door boarding, redesigning of the bus network, and tap reader components as positive steps forward, and we look to our continued partnership with the MTA on improving bus service citywide.”

To expedite additional transit signal priority, an improvement that could significantly shorten bus trips, NYC Council Member Mark Levine has introduced a bill that would require the Department of Transportation to modernize traffic lights along ten routes per year over the next four years. Modernization would include capacity for transit signal priority, shortening the wait time buses have at red lights, where they now spend an average of 21 percent of their time on congested routes, according to Levine.

Levine expects his proposed law to get a hearing later this year. “There is a huge coalition behind this,” he says, noting that the bill already has 30 co-sponsors. “We’re really optimistic that the bill will move soon, and that it will be a huge win for bus riders.”

Levine refers to the city’s current state of transportation as a “death spiral,” with the demand for public transit rising even as bus ridership drops because commuters like Saunders are choosing private cars over buses. This trend causes more congestion, which further slows down the buses.

“It’s really a parallel crisis that is no less serious than the subway crisis, but the bus crisis hasn’t been in the headlines as much as the train crisis has been,” says Levine. “[Transit signal] technology offers us an opportunity to … get into a virtuous cycle in which we reduce wait times at [traffic] lights and get people back on buses.”

The promised upgrades to the bus system can’t come soon enough for Saunders and others. “I want to see it all happen, and I want to see it happen as quickly as possible,” she says. “New York is considered the capital of the world. For us to travel like this is a disgrace. It’s embarrassing, and it has to stop.”