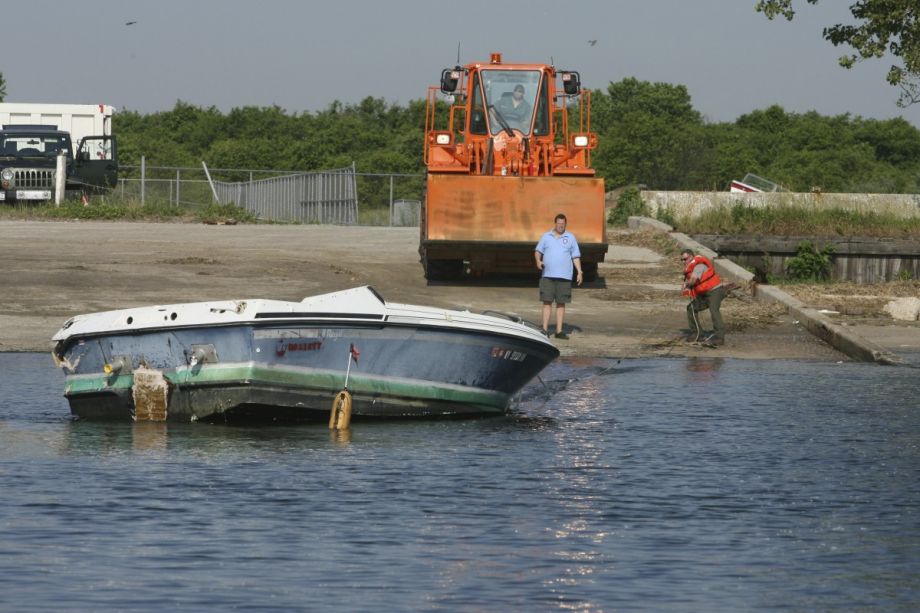 A boat abandoned in Jamaica Bay in New York is dragged ashore in 2008. (AP Photo/Mary Altaffer)

Three years after Hurricane Sandy, New York’s harbors are still populated with boats abandoned post-storm. Despite a renewed push to remove the estimated 600 vessels from their watery graveyards, the New York Times reports that removing them is a difficult task not only because of logistics, but because environmental permit applications and required filings slow down the process.

Though this blight-on-the-water problem existed before Sandy, the storm aggravated things. According to Nate Grove, senior manager of 14 public marinas in New York, 115 boats posed an immediate threat after the hurricane. While older wooden boats rot over time, newer fiberglass models are built to stick around forever.

“It’s a horrible fact of these bays and inlets that there’s no real mechanism to get rid of them,” Dan Murphy, vice president of environmental group Jamaica Bay Ecowatchers, told the Times. “Right now, it’s nobody’s job.”

The recession didn’t help, but the parks department now has a new contracting system that complies with removal regulations. A company called Custom Marine has agreed to a fixed price, with average removal cost running about $2,000. From the Times:

The first phase of the city’s project, financed with a $2 million federal grant, is focused on the removal of more than 50 boats in several pressing areas, including Eastchester Bay in the Bronx, College Point in Queens and Shell Bank Creek and Gerritsen Creek in Brooklyn. The city is applying for part of another $2 million federal grant to expand the cleanup to other notorious boat graveyards, in Coney Island Creek and the Arthur Kill along the North Shore of Staten Island.