Not All Crosswalks Are Created Equal – Next City

Not All Crosswalks Are Created Equal 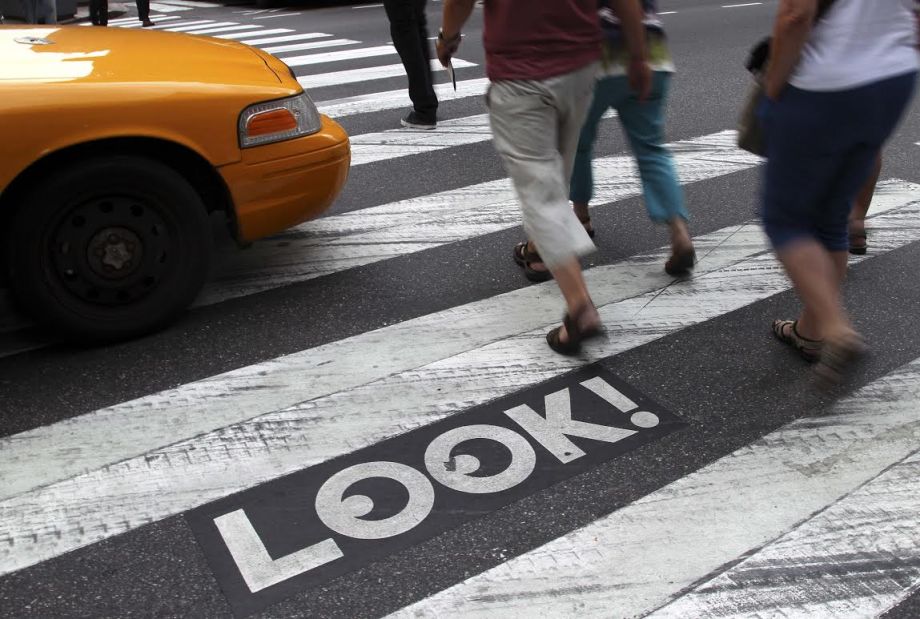 Last year, thanks to a bike share boom, the bicycle was the most visible icon of underdog transportation. In 2014, it seems, that honor belongs to the foot. Two major public figures — New York City Mayor Bill de Blasio and U.S. Secretary of Transportation Anthony Foxx — gave speeches in January stressing their commitment to pedestrian safety. The media, too, has taken up the issue: The New York Times recently ran a feature about pedestrian activism and an op-ed in defense of jaywalking.

The attention is urgently needed. After a long-term decline, pedestrian fatalities are on the rise. In 2012, 4,743 pedestrians were killed in traffic collisions in the U.S., about 650 more than in 2009. Beyond good intentions, it’s important for policymakers and the public to be aware of what works and what doesn’t when it comes to making streets safer. There’s at least one measure that’s widely considered a friend to pedestrians but highly controversial among traffic wonks: the crosswalk.

Over the years, a number of studies have questioned the value of crosswalks marked by paint or other materials but not supplemented by stop signs or traffic lights. (Traffic engineers refer to these as “uncontrolled marked crosswalks.”) One large study, published in the Transportation Research Board of the National Academies, found that on two-lane roads, pedestrians at these marked crosswalks were hit at the same rate as at nearby unmarked sites. In other words, it was no safer to cross at a painted crosswalk than at another intersection with no walker-oriented measures. What’s more, on multi-lane roads with lots of traffic, such marked crosswalks were actually associated with a higher rate of collisions than their naked counterparts. (We should note that the data were collected some time ago, between 1996 and 2001. But the study is considered particularly well designed, and there are no obvious reasons to think it has become obsolete.)

What could account for these findings? Researchers have speculated that marked crosswalks give pedestrians a false sense of security, leading them to relax their vigilance. Though studies examining pedestrian behavior have not always supported this hypothesis, evidence does suggest that at-risk pedestrians, who may otherwise soldier on to the next walk light, are seduced by the reassurance of painted markings. Indeed, one Journal of the American Medical Association study found that for elderly pedestrians, marked crosswalks — again, in the absence of other traffic signals — were linked with a 3.6-fold increase in risk.

Digging into incident reports, engineers have determined a specific kind of accident that appears more likely to occur at uncontrolled crosswalks. Here’s how it goes: One car yields, and the pedestrian ventures into the street, only to be struck by a car in the adjacent lane coming from the same direction. Why? The first car prevented the other two parties from seeing each other in time. In the Transportation Research Board study mentioned above, this crash type accounted for 17.6 percent of collisions at marked crosswalks, and none in the unmarked locations.

The takeaway is not that crosswalks are entirely useless. On narrow streets with low traffic volume and speed, they can help consolidate foot traffic. In other circumstances, they may be necessary but not the whole solution. A raised median — picture a grassy strip of land dividing a wide road in two — lowers risk by allowing people to cross in stages. (Painted medians, however, are another false friend.) Curb extensions, which shorten the overall crossing distance, have also proven an effective accessory.

It’s easy to see the appeal of a simple marked crosswalk. The cost is minimal, as is the inconvenience to drivers. But these characteristics also explain the tool’s shortcomings. Crosswalks may be emblematic of the desire for quick, cheap win-wins. The lesson of the research is that the most reliable strategies for keeping pedestrians safe require significant investments or tradeoffs with other modes of travel, or both.

The single most promising way to mitigate the danger of foot travel is to reduce vehicle speeds. Slower speeds not only give vehicles more time to stop, but also lessen the severity of any collisions that do occur. If a car is traveling at 20 miles per hour, the chances that it would kill a pedestrian are about 5 percent. If it exceeds 50 miles per hour, the pedestrian’s chances of survival are virtually nonexistent.

Successful traffic-calming tactics include various modifications of the environment, such as diagonal parking, which both narrows the road and gives pedestrians more space from which to scan for cars. Lower speed limits, while a worthy goal, tend to be largely toothless alone. “On city streets I would guess that if you pull people over and ask what the speed limits are, people wouldn’t know,” Richard Retting, a longtime traffic engineer and researcher, told me. But automated enforcement using cameras has proven to boost compliance. In any case, the point is to slow traffic down — not always a popular idea among drivers.

Pedestrians have long had the numerical membership of a majority and the political status of a minority. Perhaps that’s beginning to change. In the meantime, pedestrians can take steps to protect themselves. The authors of a recent literature review note that pedestrians could, like bikers and joggers, wear reflective clothing. This sounds prohibitively dorky for the average walker, but there are more commonsense measures. In 2009, a whopping 35 percent of all fatally struck pedestrians had blood alcohol levels above .08g/dL.

While drunk walking is certainly preferable to drunk driving, it is not without risks. Perhaps it’s time to plan for a designated walker to escort the night’s tipsy friend home from the bar. Or consider skipping that last shot of vodka — unless you feel comfortable wearing a fluorescent reflective vest.