Advanced Signaling Makes the Most Out of Old Subways, But Can New York Handle It? – Next City

Advanced Signaling Makes the Most Out of Old Subways, But Can New York Handle It? 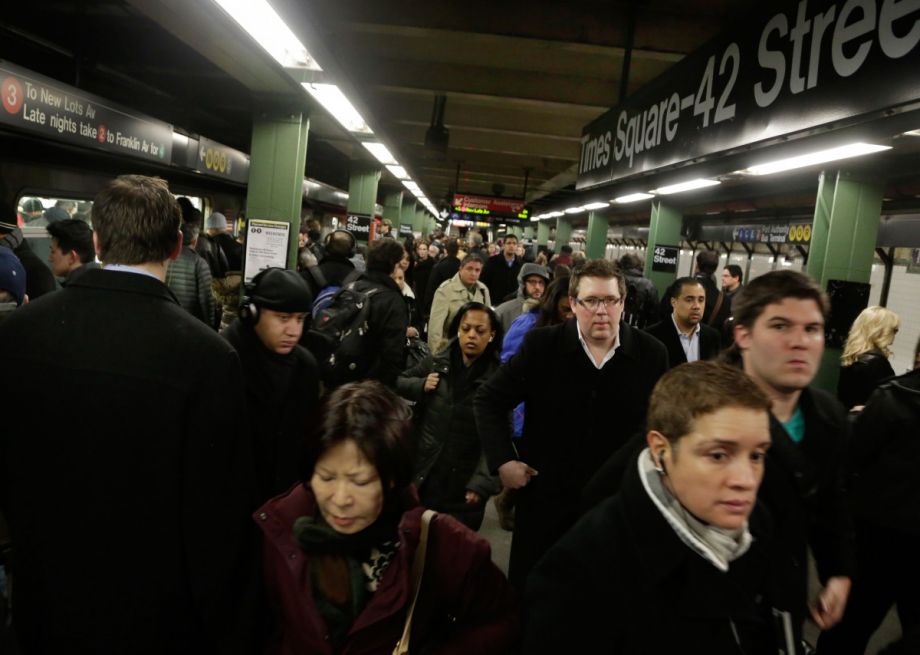 In the German-speaking world, there’s an old saying about transit planning: Organisation vor Elektronik vor Beton, or organization before electronics or concrete. With limited resources — and resources are always limited — transit agencies should exhaust all of the cheapest fixes before heading toward the more expensive “concrete” options like digging new tunnels and laying more track.

New York City and many large cities around the world have nearly hit their limit on the cheapest sort of organizational fixes like lengthening trains and rejiggering schedules. They’re building a few new lines, but these are very expensive (nowhere more so than in New York). So in the meantime, cities such as New York, London, Paris and Tokyo are relying on electronics as the primary way to up rail capacity.

Electronics nowadays means advanced signaling technologies — communications-based train control, or CBTC, is the latest generation — that allow for more frequent and smoother operations of trains. So-called “moving block signaling” allows trains to travel more closely together while still maintaining enough distance to safely brake, in turn allowing lines to host more trains per hour. Trains and the computerized dispatching system communicate directly by radio, eliminating maintenance requirements for unreliable signaling equipment alongside the tracks. Rerouting trains and managing trains — “single-tracking” around accidents, or slowing down or speeding up to make up for changes in the schedule — is easier and can be done more precisely by computers, eliminating many signal-related delays (which in New York are the most common kind). Trains are driven automatically, with much smoother rides.

London, Paris, Madrid and other cities in Western Europe are making great strides in equipping their generations-old lines with CBTC, while Japan has systems that achieve similar results. New York City, as always, is the laggard. The Regional Plan Association (RPA), an independent New York-area transportation and planning group, has released a report on the state of CBTC in New York, with recommendations for how to speed its implementation.

Unlike most small cities in the U.S., which have significant unused transit capacity, many of New York City’s subways are at or near their limits. Most lines cannot handle any more trains per hour during the busiest time of the day, or are a train or two away from maxing out. (The exceptions are the 1, J/M/Z, G and L trains, the last of which only has the capacity because CBTC is already installed.)

Beyond allowing lines to run a few more trains per hour and generally smoothing the train-riding experience, CBTC systems are also more resilient than complex traditional signaling systems. The L train’s transponders survived five days under the salt water that Sandy washed in, while the old “fixed block” systems required much more work to get back in working order.

RPA recommends a slight acceleration in the MTA’s plans to roll out CBTC across the system, suggesting a bump from 16 track-miles per year to 21.

There are, however, high hurdles to RPA’s plans.

The first is related to the complexity of the task and the MTA’s backwardness when it comes to technology. New York City’s subway is genuinely one of the most complex on earth, with a complicated system of branching and quadruple-tracked trunk lines, mostly in Manhattan but also in some parts of the outer boroughs. It’s more akin to a miniaturized national rail network than a standard subway line, where each subway only hosts a single service, with at most a branch or two and no express tracks.

CBTC has already been installed on the L train through Williamsburg, Bushwick and beyond, and implementation on the 7 train is in progress. But these are simple end-to-end lines, not unlike your average subway line in Paris or Madrid.

In London, the simple CBTC conversions have gone well. The Victoria sees 22 percent more trains during rush hour than before, the Jubilee Line got a 22 percent reduction in travel time and both lines saw delays drop 40 percent.

But unmentioned in the RPA report is the experience on London’s more complex lines — the Circle, District, Hammersmith & City and Metropolitan sub-surface (rather than deep tube) lines, which have more junctions and connections between each other and the national rail network. They have so far stymied the vendors who have tried to outfit them with CBTC, with two different signaling contracts canceled, likely owing mostly to the complexity of the job.

On transit, London generally lags behind Paris and Madrid, which have taken signaling to its logical conclusion and started phasing out staff on board trains entirely. But the British capital is light years ahead of New York in transit technology and prowess. If London can’t manage to do it now, how long will it take before New York City can manage? Up until now, the MTA has averaged only four track-miles of CBTC upgrades per year. Their target for the next 20 years of 16 track-miles annually is ambitious enough given the complexity of the task, never mind RPA’s recommended 21. The real test will come during the next line, on Queens Boulevard, which hosts four different services, and whose CBTC upgrade will be significantly more complex than the MTA has done before.

The second major complication is one of labor. New York City’s subways are some of the most labor-intensive on earth, with both a driver and a conductor in the middle of the train who operates the doors. The vast majority of rapid-transit lines in the developed world are driven without conductors, lowering operating costs and allowing agencies to run trains off-peak more cheaply. One argument for conductors in New York City is that the trains are longer — in some cases much longer — than in subways around the world. But with CBTC, trains drive themselves once the doors are closed, freeing the driver to pay more attention to the doors.

RPA suggests that CBTC could lead to one-person train operation across the system, but this has so far not happened. While the MTA tried to drop the conductors from L trains after CBTC was installed on the lines, the unions protested and a labor arbitrator sided with them, forcing the MTA to keep the drivers. (This is particularly bad for the L train, which sees heavy off-peak traffic. Without system capacity constraints outside of rush hour, the only thing stopping the MTA from meeting this demand adequately is the cost of two-man train crews.) With no interest from Governor Andrew Cuomo on pushing the issue, CBTC alone won’t allow this significant cost savings.

RPA succeeds in making the case for CBTC, and the MTA clearly recognizes the need as well, but it remains to be seen how fast they get there.