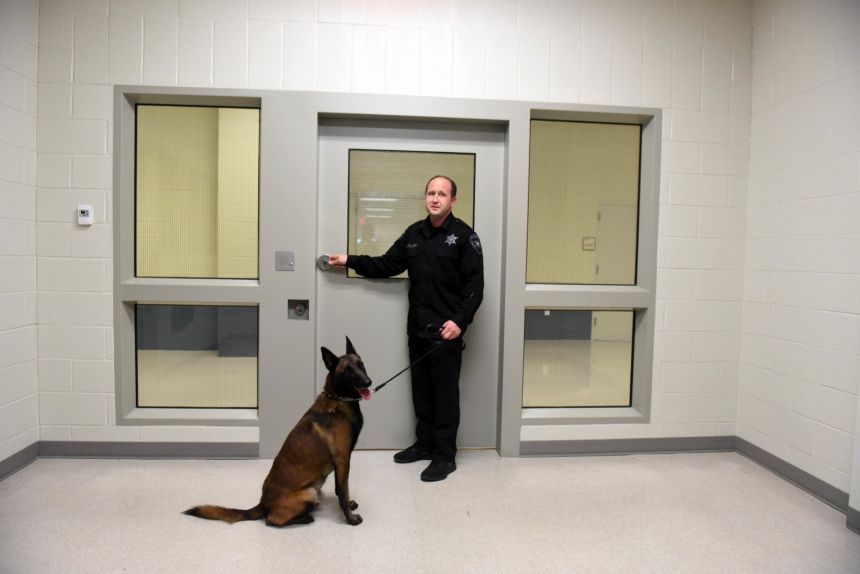 A guard in the Orleans Justice Center (Photo by Cheryl Gerber)

Jaquin Thomas was found dead in his jail cell in October 2016, the result of an apparent suicide. He was 15 years old. In February, 23-year-old Colby Crawford was found unresponsive in his cell. He had a history of mental illness and was pleading guilty to charges of aggravated assault and domestic abuse on reasons of insanity. In May, Jamaine Johnson, also 23, hanged himself with a phone cord in his cell after apparently expressing suicidal thoughts the week before.

All three were housed in the Orleans Justice Center (OJC). The $145 million facility, which opened in 2015 in New Orleans, was designed to replace the substandard Orleans Parish Prison and meet the constitutional standards of a 2013 federal consent decree. The result of a lawsuit filed against the jail and Sheriff Marlin Gusman on behalf of inmates by the Southern Poverty Law Center, the consent decree placed the jail and the sheriff’s operation under federal monitoring.

Yet despite the new facility, according to a 2016 monitoring report, the sheriff’s office “cannot provide comprehensive mental health services as required because the OJC building does not have adequate space, custodial support or programmatic services … .” Some in New Orleans think another new building will solve those problems, but many prison reform advocates say more jail beds mean more people in jail — and that an expansion plan likely to be approved by the city is exacerbating overincarceration.

Gary Maynard, an independent compliance director appointed in October, recommended a plan for a new, standalone building to accommodate those with mental health needs. Currently, anyone with acute mental health needs is housed in another facility, Hunt Correctional, about 70 miles West of New Orleans. The new building would have 89 beds, and a 62,000-square-foot medical wing including an infirmary, medical clinic and administrative space, as well as a family visitation area and a laundry facility.

New Orleans is among U.S. cities with the highest incarceration rates per capita, and New Orleans City Council and Mayor Mitch Landrieu have expressed a commitment to reducing the city’s jail population in the past. Similar calls have been issued by other U.S. mayors, including Philadelphia’s Jim Kenney and New York City’s Bill de Blasio, who recently announced plans to close Rikers Island. A Vera Institute of Justice study last year found that “New Orleans has more than enough beds to accommodate both its current and projected jail population.”

But at a May hearing, City Attorney Rebecca Dietz told New Orleans City Council members that she believed the city would be held in contempt of court if it did not support the recommendation for a new building. Signaling a decision shift among council members, Council President Jason Williams said that the expansion was the necessary compromise.

Opponents say that a new facility in the name of mental healthcare is a prison expansion in disguise. Adina Marx-Arpadi, of the Orleans Parish Prison Reform Coalition (OPPRC), says new construction won’t solve inadequate staffing or programmatic needs. That would look more like a new healthcare contract, or hiring plan.

Moreover, wonders Marx-Arpadi, if the new jail wasn’t built to compliance, what guarantee is there that a third building would be? For her coalition, which includes the ACLU of Louisiana and other local advocacy groups, adding beds will only contribute to the overincarceration that has plagued New Orleans and Louisiana for so long.

Though Mayor Landrieu has a history of pressing Sheriff Marlin Gusman to keep the jail population down, Landrieu seems to be in agreement with council on a compromise.

“We have stated from the beginning that the retrofit option would be a good option,” said Dietz, on behalf of the Landrieu administration during the May hearing. “However we have been debating this issue for years … . This is now the alternative that the parties to the litigation reached.”

The City Council voted to pursue the new building option and is awaiting an official plan from the City Planning Commission to make a final vote. Their decision came the day before the last of New Orleans’ four confederate monuments was removed from its pedestal. The timing was notable given that the 2016 Vera Institute of Justice report found that “black men in New Orleans were 50 percent more likely than white men — and black women 55 percent more likely than white women — to be arrested.”

“There’s a certain irony that council voted this way right before the last monument came down,” says Marx-Arpadi. “Mass incarceration is a form of white supremacy and the legacy of slavery.”