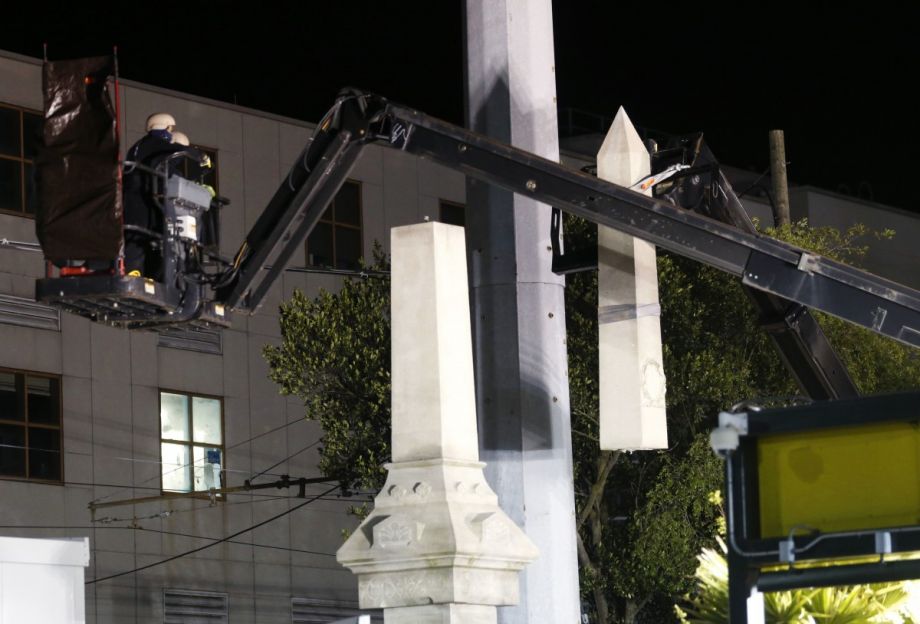 Workers dismantle the Liberty Place monument, which commemorates whites who tried to topple a post-Civil War government, in the middle of the night last week in New Orleans. (AP Photo/Gerald Herbert)

Jefferson Davis is coming down, but I can’t tell you exactly when, and I don’t know who will remove him. His dethroning has been in the works since Mayor Mitch Landrieu asked the New Orleans City Council to consider removing four Confederate and white supremacist monuments in 2015. The request came weeks after the racially motivated killings of nine churchgoers in Charleston, South Carolina, but some had called for their dismantling for decades.

Last week, after a year and a half of court challenges, the first monument was removed in dead of night. Davis is next — Landrieu has said he’ll come down from his spot at Jeff Davis Parkway and Canal Street in the next 30 to 45 days — but the city government won’t provide more detail than that, and won’t be throwing a celebration.

Indeed, a decision some say Landrieu made to bulk up his progressive credentials appears to be backfiring on both sides.

In a bid to protect the identities of contractors and workers, the city is using private funds funneled through a nonprofit entity not subject to the same public bidding process or transparency laws as a public agency. According to the New Orleans Advocate, over $600,000 has been donated to the Foundation for Louisiana for the removal work, and the nonprofit has an agreement with the city to use those donations to work with contractors and pay all removal costs.

Days after that agreement was signed, masked workers took down the first monument, an obelisk honoring a Reconstruction-era uprising by white citizens against the city’s integrated police force. Its plaque explicitly declared white supremacy the law of the land until 1993. The monument was removed at 3 a.m., under protection of snipers, and carted away in trucks with the logos blacked out.

Those who want the monuments to stay argue this secrecy prevents citizens from ensuring the work is being done well, and that it flies in the face of Landrieu’s claim that the removals are about unity. The city says it is a necessary precaution. A company that had been publicly contracted for the job in 2016 received death threats, and around the same time, the owner’s Lamborghini was torched in his driveway. For the past few weeks, pro-Confederacy protesters, many of them from outside New Orleans, have been camped out around the monuments, sporting flags and frequently guns.

Take Em Down NOLA, the people of color-led advocacy group that has been calling for the removal or replacement of hundreds of statues, and street and school names associated with the Confederacy and white supremacy, is questioning the secrecy too.

After years of organizing for this moment, “we definitely envisioned it as a public event,” says Michael “Quess?” Moore, a lead organizer and co-founder of Take Em Down NOLA. Though he supports the removal, he questions Landrieu’s motives as self-serving and hypocritical — political opportunism.

The argument for worker safety and contractor anonymity doesn’t hold water for Quess? either.

“They said safety, we said bullshit. We said Katrina: You called the National Guard on your own citizens when they were trying to escape a flooded city,” he says. In other words, he’s seen how forceful a city can be with its own citizens; does it truly lack the resources to protect against a few out-of-town neo-Confederates? Columbia, South Carolina, he notes, held a public ceremony when the Confederate flag was lowered and removed from the statehouse in 2015 — without incident, just a few weeks after the Charleston shooting. Quess? says the long delay between the New Orleans City Council voting to remove the statues and the actual removal has allowed the opposition to foment and organize, making an increasingly unsafe situation from an ever-controversial one.

Donald Cohen, executive director of In the Public Interest, an Oakland-based nonprofit that focuses on government accountability and responsible contracting across the U.S., says he’s rarely seen lack of transparency justified as a way to protect workers. The closest comparison he can think of are laws that try to shield police officers from retaliation by protecting their personal information. It’s a common yet troubling practice, he says, for cities to break up contracts in order to keep them below a certain dollar amount to avoid a public bidding process or a council vote. But the New Orleans scenario is new to him, and he sees it as double-edged.

“It certainly raises red flags. There’s clearly a legitimate security issue, the question is how you deal with it. Complete lack of transparency is not a good thing,” he says.

There’s the concern raised by the monuments’ supporters — that the statues could be damaged in deconstruction or transit — and the more standard good government concern that public money is being spent well, though that question is complicated in this case by the use of private funding.

“You have to be able to balance those concerns, which are real and not to be ignored, with the security concerns, and I’m sure there’s a way to do it other than keeping everything secret,” says Cohen. “I’m not saying every contract is a corrupt deal, but there are reasons for things to be transparent: Are we getting what we paid for, are there deals being done that’s benefiting someone more than they should be benefiting, are there favors being given, are the quality of services adequate for what we want for the public?”

In this case, the lack of transparency seems to further goals of people in favor of racial justice, but Cohen can imagine scenarios in which the opposite would be true. Hundreds of architects have publicly declared they wouldn’t build President Donald Trump’s border wall along the country’s southern border. What if they could be offered anonymity? “You don’t have to stretch very far to think that the Trump administration would do that,” says Cohen.

This weekend, Take Em Down NOLA will host its own removal celebration, a “Second Line to Bury White Supremacy” that will march from Congo Square to Lee Circle, where a statue of Robert E. Lee, slated for removal, still stands. Maybe it will be gone by Sunday — Landrieu’s not talking.

The Monumental Task Committee, which opposes the removal, and the Foundation for Louisiana, did not respond to requests for comment.