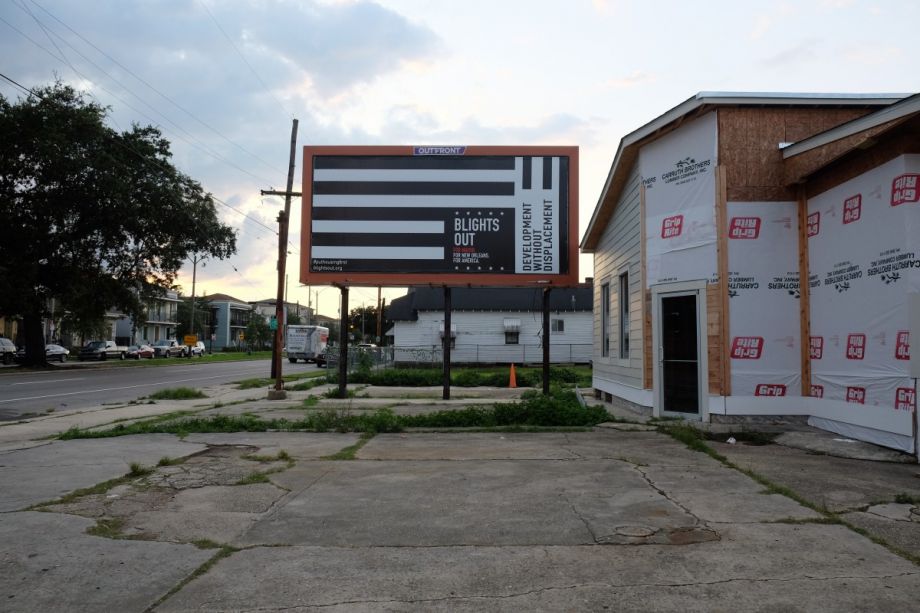 In January, a billboard popped up along New Orleans’ Pontchartrain Expressway. It read, simply, “LaToya.” City Council Member LaToya Cantrell had yet to announce her bid for the mayor’s office, yet to release a policy platform, but there it was, her name — her brand — plastered in big letters.

The billboard is part of a yearlong campaign by transdisciplinary artists and activists collective Blights Out — no members of which, it should be said, are actually running for mayor. Instead, they’re trying to call attention to the underlying inequities that tend to appear in mayoral races purely as subtext or sound bites. Founding member Imani Brown says elections often center superficially around charismatic figures and skin-deep slogans — “Stronger Together,” anyone? — rather than the deeply rooted issues residents face. And yet elections also present an opportunity: They’re virtually the only time some of those issues get raised.

“Elections take up so much focus and attention, and that’s when issues around housing, issues around infrastructure, issues around jobs tend to have the public attention,” Brown says. But when the election ends, those conversations usually end too — without ever having been deeply investigated, and without much promise they’ll be addressed or solved.

“How can we take these shallow campaigns of politicians, that feature their names as brands or their talking heads without a platform attached to it, and how can we flip the script on that and use the power of those aesthetics and those spatial strategies to actually communicate something meaningful?” asks Brown.

Over the next year, Blights Out will try just that, plastering a new sign each month on a billboard at Orleans Avenue and Galvez Street. Each will feature messages drawn from public story circles, conversations with housing activists and New Orleans residents, and from Blights Out’s own research into the roots of common but inequitable real estate terms and practices.

October’s billboard reads, “Ecological apartheid (spatial segregation) is already etched into our housing landscape. Will the future of our city be a gentrified fortress to protect the wealthy from the rising-up of seas and people? We Demand a Post-Katrina Truth and Reconciliation.”

November’s billboard defines disaster capitalism; December’s defines gentrification; January’s defines blight. These are big concepts, and Blights Out is intentionally complicating them, not dumbing them down. (A Kickstarter to fund the project ends on Oct. 12.)

“In New Orleans, you start to notice the vast majority [of billboards] are ads for guns, for liquor and for lawyers,” says Brown. “By and large they’re incredibly useless and alienating or actually harmful. We see this as sort of a proposal: Why are billboards not used to convey important information to the citizens of a place?”

Mariama Eversley, Blights Out’s embedded historian, says their campaign differs from a political campaign in that it tries to get to the root of the problems plaguing New Orleans. Whereas mayoral candidates are railing against crime independent of its causes, Blights Out wants to interrogate the role of skyrocketing housing costs and the high rate of unemployment among the city’s black men.

“Our work is demonstrating: What if we really reconciled with the past?” says Eversley. Each billboard intentionally builds off the last, introducing and defining new terms, all leading up to a proposal for the future: truth and reconciliation in New Orleans, akin to the process that followed apartheid in South Africa. With the rapid pace of gentrification and development in the city following Hurricane Katrina, and the unequal effects of that development on poor residents and residents of color, New Orleans is sick, says Brown, and in need of healing.

“This space we’re in of constantly rushing forward, constantly developing, constantly chasing after this idea of growth, is not allowing us the time to actually stop, to think, to speak to each other, to listen to each other, to know where we’re at and where we’re going,” says Brown. This year’s campaign builds off last year’s similarly tongue-in-cheek “Blights Out for President.” Again, the group didn’t really run a candidate, but rather promoted a vision of “the people for president,” as their lawn signs read.

“We’re trying to flip the script on the idea that one person can carry the needs and conversation all on their own,” says Brown.

On Oct. 14, New Orleanians will vote — yes, Council Member LaToya Cantrell is in the running for mayor. But Blights Out will keep campaigning afterward, not for a politician, but for a reevaluation of the past, and a people’s say in the city’s future.