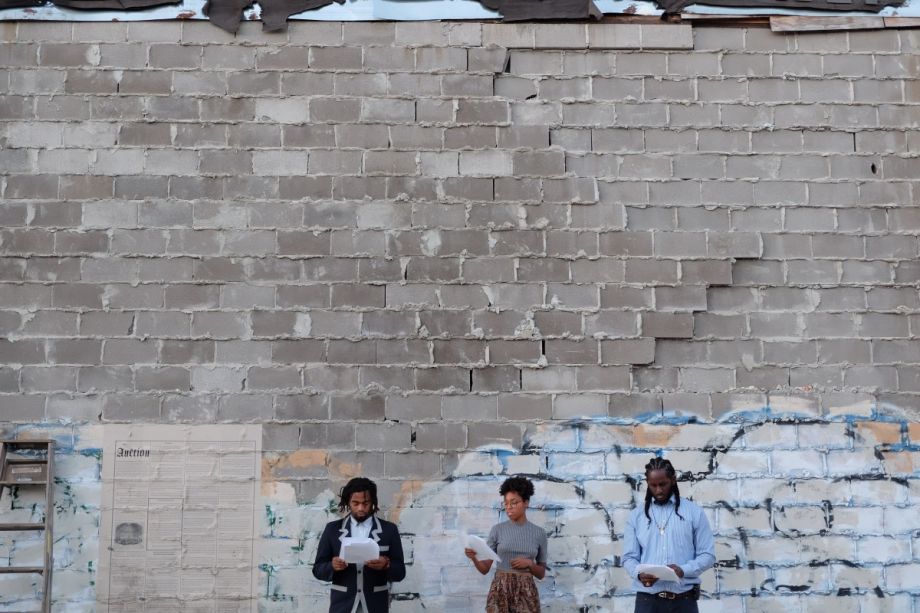 Also called public sale. A publically held sale at which property or goods are sold to the highest bidder
A system where potential buyers place competitive bids on assets and services. The asset or service in question will sell to the party that places the highest bid. In most cases, sellers will pay a listing fee to the auctioneers, regardless of whether the item actually sells for the desired price.
[Image of a slave auction in New Orleans’ ‘luxurious’ St. Louis Hotel]”

On the first of this month, 20 blocks from a “May Day Anti-Fascist Karaoke and Barbecue” just then coalescing around New Orleans’ soon-to-be-removed monument to Jefferson Davis, a group of artists and affordable housing advocates took on what they see as a subtler manifestation of white supremacy: the auction.

On a vacant lot in Treme, beside Ooh Poo Pah Doo Bar (which had just that week been served eviction papers), three performers read aloud from a script linking the city’s history of slave auctions to its modern forms of repossessing and auctioning blighted properties. A culmination of research by Mariama Eversley, Imani Jacqueline Brown, and other members of transdisciplinary artist collective Blights Out, the event was the first in a series of investigations into common development terms with loaded histories: auction, blight, community, demolition, gentrification, property.

That last term, and how it has been constituted in American history, laid the foundation for Blights Out’s dissection of auctions as well. The event was held, after all, on a vacant lot that the collective has been struggling to acquire before they’re priced out of a gentrifying neighborhood, in a city and country where black bodies were once considered property to be bought and sold. After performers Michael “Quess?” Moore and Daiquiri Rene Jones defined “auction,” and “citizenship,” Eversley read aloud:

“If the buying and selling of property is a qualification of citizenship, then the auction of real estate is the process by which citizenship and the freedoms and limitations thereof are established, maintained and revoked. Through the dehumanization of human-turned-property, a U.S. citizen with rights and ‘freedoms’ is born. This dehumanization is normalized through the spectacle of the auction.”

In other words, purchasing human property at auction was once a potential path to citizenship for the buyer. Today, property ownership — real estate or otherwise — is no longer a requirement for citizenship. But it remains a commonly touted path to financial security and the elusive American dream, though it is increasingly clear to many that the path is not equally available to all. The auction, argues Blights Out, is a major engine of that inequality, in part because it stems from the slave trade: the one devaluing black bodies as mere commodity; the other, black homes, black neighborhoods, black spaces.

“There is a connection between antebellum slave auctions and their financial relationships, to real estate and also to city planning, which shows you the way white supremacy is mapped in so many ways and so many layers onto urban space, particularly in New Orleans,” says Eversley.

The New Orleans City Planning Commission, she discovered, has roots that can be traced back directly to wealthy slave auctioneers, who turned to real estate after the war. Articles drawing that connection, plus snippets of interviews and oral histories mapping today’s auction process, were woven together into the performance and a broadsheet distributed at the event.

Eversley says her research is far from over, “but the correlation is undeniable. And it’s not surprising, because black people were considered real estate. Subconsciously we know that, whether or not we’re thinking about what that means.”

In post-Katrina New Orleans, auctions have proliferated as a central tool in Mayor Mitch Landrieu’s anti-blight efforts, as a means to “return properties to commerce,” as the New Orleans Redevelopment Authority (NORA) puts it on its website. NORA holds auctions twice annually; the Orleans Parish Sheriff’s Office auctions off foreclosed properties once a week; New Orleans has an online system for auctioning off adjudicated properties with unpaid property taxes.

“All these different auctions that are means of trying to inscribe monetary value to a property that has somehow failed,” says Imani Jacqueline Brown, a Blights Out co-founder who grew up in New Orleans. “First as shelter because no one is living in it, it’s not helping anyone. And has failed secondarily in its function as a financial instrument. The New Orleans that I know and that I grew up in values property and values neighborhoods not as an investment, not as an asset class for speculation, not as a starter home that you’ll then abandon and move onto something bigger and better and more prefab, but you value it for its ability as a social asset and cultural asset, as a cultural and community anchor.”

New Orleans has between 20,000 and 50,000 blighted properties, while housing advocates estimate the city will need 33,000 affordable housing units by 2025. Blights Out says developers have the upper hand over current residents in the auction and acquisition process.

About three years ago, the collective set out to acquire a piece of property through relational channels — no auctions. “We don’t want to participate in a process that could be potentially predatory. We want to acquire property from people who actually want to sell their property, not people who have gotten stuck somehow,” says Brown.

They canvassed the neighborhood, identifying the owners of vacant houses, writing to them about how they might buy the properties directly.

The goal was to rehab a two-story space into permanently affordable housing, backed by a land trust, on the second floor, and with a community arts and organizing space on the ground level. Eversley was brought on to document the process, with the intention of creating a toolkit others might follow to acquire property themselves.

But their own experience ended up revealing just how convoluted that system is. The first house they looked at burned down. Brown points out how in neighborhoods that are gentrifying, blighted houses tend to receive a lot of calls to code enforcement for issues as minor as chipping paint, but in neighborhoods like Holly Grove where one in three houses are vacant, major health and safety hazards can go unaddressed.

Their second choice turned out to be problematic too. A housing nonprofit had purchased about 10 houses in an auction after Katrina, with a mandate to turn them into affordable housing within the year. They ran out of funds after working on half and transferred the rest to other nonprofits through the official channels, but gave one away to a New York-based lawyer. Blights Out spent months trying to acquire the property from her, ultimately involving the mayor’s office. But she sold to someone else. At this point, the house has flipped three times, its value rising from $8,000 to nearly $200,000. It still sits vacant.

“This was a house that was earmarked for affordable housing, and it’s slipping through the cracks,” says Brown. “And if it’s happening with this one, it must be happening with dozens of other ones.”

Finally, Blights Out found a third house, adjacent to Ooh Poo Pah Doo Bar. Before the whole group could look at the property together, the city demolished it. Four years after starting their search, the collective is now trying to purchase the vacant lot where it once stood, plus another across the street. If the deal goes through, they’ll use the lots to create semipermanent outdoor structures for gathering spaces, perhaps eventually building a house from scratch. It’s not ideal, but they don’t see another option. “The window to get what we wanted is closing,” says Eversley.

Now, to acquire one lot, they’ll have to pay off $29,000 in unpaid taxes — and, if the city doesn’t waive them, blight liens and even a demolition fee. This idea that property is valueless unless it contributes to city coffers directly impacts black homeowners, argues Eversley.

“‘If it can’t be taxed then it’s now not valuable, so we can demolish it,’” she characterizes the city’s position. “But what if there’s a people without wealth, because there’s never been a moment for us to accumulate wealth? That keeps us perpetually valueless and then always subject to removal.”

As much as she thinks people need to be educated about the interlocking systems at play, Eversley sometimes worries that the findings are so grim, they could stoke pessimism. And she and Brown acknowledge the potential for paradox in using art to combat gentrification and displacement. Blights Out began, after all, when founders Brown, Lisa Sigal and Carl Joe Williams were asked to beautify blighted homes for an arts festival. Williams refused, saying he was “not interested in painting a bandage on the open wounds of the community,” according to Brown.

But arts do drive gentrification. Brown relays a quote from Larry Fink, CEO of world’s largest asset management company BlackRock, who says that the two greatest financial assets in the world are contemporary art and apartments in New York, Vancouver and London. Contemporary art, of course, is frequently sold at auction.

“There’s no win. It’s a small win,” she concedes. “But ultimately the city is going to be gentrified. We’re just trying to stem the bleeding at this point.”

Editor’s Note: This article has been corrected to reflect the actual location of the lot Blights Out is trying to acquire, and the length of time the collective has been searching for a property. A correction has also been made surrounding the number of blighted properties in New Orleans: There are an estimated 20,000 to 50,000.