The Why, Where and How of Adding Bike-Share Stations – Next City

The Why, Where and How of Adding Bike-Share Stations 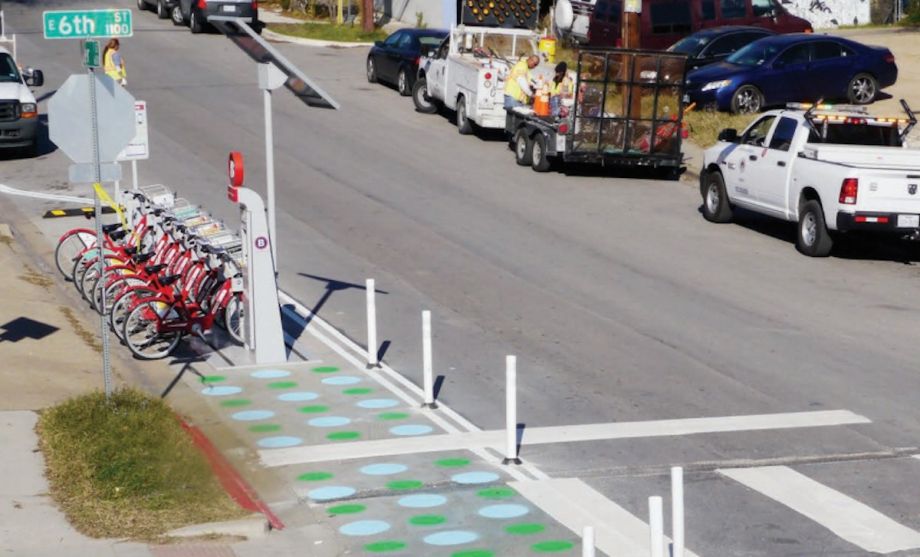 Smart bike-share choices can make a new docking station a natural partner to trips by foot or transit, whereas poorly positioned stations can contribute to crippling a whole system. As U.S. cities continue to work on equitable access to and the financing challenges of bike-share, they now have a handy guide on the where, how and why of adding stations thanks to the National Association of City Transportation Officials. Its “Bike Share Siting Guide,” released today, draws on examples from across North America to offer models for locating stations in the safest, most accessible ways possible.

NACTO research shows that bike-share stations placed within a 3- to 5-minute walking distance of each other throughout a contiguous service area are essential to a system’s success. As stations become that densely sited, cities will need to look beyond “low-hanging fruit,” according to the guide, like wide medians and plazas. NACTO suggests smart station placement can contribute to traffic-calming initiatives when placed in curb bulb-outs or as part of a buffer for a protected bike lane. The guide focuses on the type of modular stations commonly used in the U.S. and Canada.

While many siting considerations are unique to individual cities’ culture and constraints, NACTO considers some placement principles universal. “No one wants to use a bike-share station in a poorly lit location or where they feel personally unsafe,” reads the guide. “Potential riders may be discouraged if stations are hard to find or hidden behind walls, buildings or trees. Similarly, it may be difficult to attract and retain sponsors and advertisers if stations are hard to see.”

They suggest five core siting goals: Stations should be accessible and convenient, at any time, in any season. They should enhance the pedestrian realm; be designed for safety and thus considered a traffic-calming tool; be operationally feasible (with adequate sun exposure if solar powered, and accessible to maintenance vehicles); and meld with the streetscape hierarchy, not impeding permanent elements like hydrants or bus stops. They’re most effective when located near existing bike lanes and other bike infrastructure.

Stations can also be utilized as placemaking tools, supporting Vision Zero and complete streets policies as well as local businesses. The guide cites examples from New York City, where Citi Bike stations have been used to anchor pedestrian plazas, creating new places for people to sit and linger. Researchers there and in Minneapolis found that bike-share stations increase the economic activity of nearby stores, and especially restaurants. A New York survey found that a bike-share station in the curb lane, taking the place of a metered parking spot, increased commercial spending by 52 percent.

“Vigorous community engagement is key to bike-share success,” Tonnetta Graham, president of Strawberry Mansion Community Development Corporation in Philadelphia, said in a press statement about the guide’s release. “As shown in Philadelphia, having community members actively involved in station placement and design helped align the needs and goals of bike-share and our community. Empower our concerned citizens and they will be ambassadors of bike-share throughout the community.”

For specific locations, the guide lists several typologies for on-street, sidewalk and open-space siting. It notes that docking stations have a low profile compared to cars, making them ideal replacements for parking spots at intersections, where they can increase pedestrian visibility. Even when situated in the street, they can be protected from moving traffic by bollards, buffers or planters.

The guide also details specific station configurations, providing examples of a variety of designs: straight, angled, back-to-back, etc. It discusses materials, how to interact with utilities, and how to situate stations so that kiosks are accessible to users.