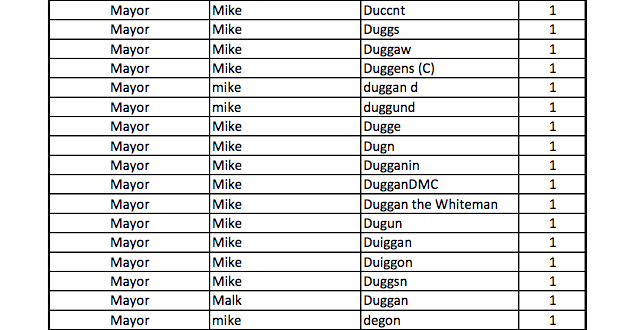 From the unofficial write-in summary for this year’s mayoral primary in Detroit.

How much could anyone want to be mayor of Detroit right now, with the city both under emergency management and filing for bankruptcy? The two top contenders for the job are showing how fiercely they will fight for it by pushing forward in a political race getting stranger by the day.

The Wayne County Board of Canvassers on Tuesday refused to certify the official mayoral primary results, after submitted numbers appeared to invalidate nearly 20,000 votes cast on August 6. This may lead to state or federal intervention to ensure that the election proceeds properly.

On the evening of the primary, Wayne County sheriff Benny Napoleon and former Detroit Medical Center CEO Mike Duggan were pronounced winners, setting up a face-off in the November election. But what shocked onlookers is that Duggan appeared to have beaten his opponent handily, earning 46 percent of the vote compared to Napoleon’s 30 percent. This, despite a legal challenge to Duggan’s residency that forced him off the ballot earlier this summer. He instead ran a write-in campaign.

Duggan, who raised about four times as much money as Napoleon, also faced a late-filing write-in opponent — a barber named Mike Dugeon — who had never voted before deciding to run as mayor. He almost certainly was brought into the race to confuse voters.

Duggan’s 16-point lead over Napoleon was unofficial, however, and on Tuesday official word came. Numbers released by the Wayne County Clerk’s office show that Napoleon actually won the primary, with 47 percent of the total vote versus Duggan’s 34 percent. It was nearly a complete reversal of the numbers announced on August 6.

While this doesn’t change which candidates Detroiters will choose from in November, it lays ground for yet more legal and political muck to complicate the race. With the four-member Wayne County board of canvassers refusing to certify the clerk’s official numbers, the notion that nearly 20,000 ballots for Duggan may have been improperly “lost” is more than just buzz.

“Our opponents tried another dirty trick today and it didn’t work,” Duggan’s campaign manager Bryan Barnhill said in a statement on Tuesday. “To its credit, the Board of Canvassers unanimously refused to disenfranchise 18,000 Detroiters who properly cast their write-in votes for Mike Duggan. We’re confident the State Elections Division will certify the results of the election properly and make certain that all votes are counted.”

According to the Detroit News, “Duggan legal counsel Melvin ‘Butch’ Hollowell said the board should not make up rules in midstream to disenfranchise city voters.” Hollowell said the campaign is considering a recount request, and will take “immediate action” to ensure that “what was done there is overturned immediately.”

Napoleon himself has raised questions about the huge gap between the unofficial and official results. He said in a statement:

This is no small margin of error. This is very troubling, and I believe it is cause for Detroit’s General Election to be overseen by the highest authority — either the Federal Elections Commission or the Department of Justice. Detroiters need to know their votes count and is not predicated on someone’s actions or inactions. We must protect our most sacred right at all costs.”

The board of canvassers reportedly approved several versions of write-in votes for Mike Duggan, despite his name’s likeness to that of Mike Dugeon, including, “Mike Duggnn, Mick E. Duggan, Milk Duggan, Mr. Duggan and Mike Duggan ‘the Whiteman,’” according to the News.

So why the gap? Thousands of write-in votes in question were not recorded at polling locations using the hash marks that count votes individually in poll books. Instead, they were recorded using just the numerical number of votes. This error belongs to Detroit election workers, not voters — the manual with state guidelines for election procedures “does not give instructions if hash marks are not recorded in the poll books. However, the manual says any errors discovered in election records during a canvass must be corrected,” according to the Detroit Free Press.

With little precedent guiding them, the board of canvassers is reportedly split on whether to drop the votes mismarked by workers, and has decided to hand the matter over to the state election board. Decision-makers there might want to remember a Michigan Supreme Court precedent, which holds that a vote for a write-in candidate should count when the voter’s intent is clear. There appears to be no state instruction that would compel mismarked votes to be dropped from the count.