Meet the Next American Vanguard: Megan Canning – Next City 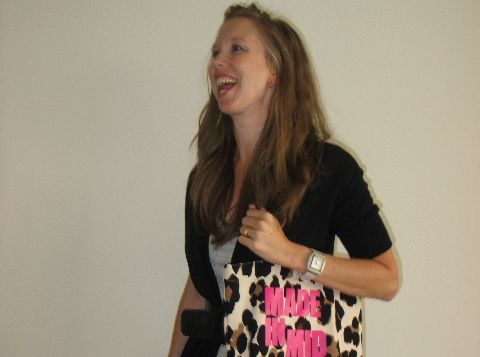 Next American Vanguard is the only annual conference dedicated to enlightening, inspiring and networking the next generation of urban leaders. For two days in May 2009 and 2010, two such groups of leaders had the opportunity to network with each other, engage with experts in their field, hear from seasoned changemakers and jumpstart their ideas for improving cities. But the Vanguard’s work continues year-round in the government offices, nonprofits, corporations and communities they work in. Each Monday leading up to the 2011 conference, which will take place in May, we will feature an interview with a member of the Vanguard. To learn more about eligibility, click here (the application period will begin in early 2011). To read a recap of the 2010 event, click here.

Megan Canning is the Deputy Director of the Design Trust for Public Space, an independent nonprofit organization that brings together city agencies, community groups and private-sector designers to improve public space in New York City. Originally from the Midwest, she has lived in New York City for the past 11 years (which means she is now bona fide New Yorker). In addition to working to improve New York City’s public realm, she is also a visual artist, with an MFA in Painting from Hunter College. She lives in Ft. Greene, Brooklyn – just a few blocks from Walt Whitman’s old home – with her husband, 3 goldfish, and lots of art, books & plants.

As Deputy Director of a small nonprofit (there’s 5 of us total), I have my hands in just about everything, so my days really vary. Let’s use today as an example:

1. Travel to work by subway, which takes around 45 minutes from my apartment, and read The New York Times (the real, paper version!) on my way in.
2. Talk to two graphic designers about a newspaper project for our Photo Urbanism fellowship (which I direct). Put together a Creative Brief for them and send it off.
3. Meet with our Director of Programs and Executive Director about our new urban agriculture project, Five Borough Farm.
4. Quick lunch (brought from home) at my desk. I usually spend this time catching up on some work-related reading – either a few blogs like City of Sound, Urban Omnibus, and Design Observer or some of the magazines we get here at the office, like Crain’s Business, Good, Fast Company, Architect’s Newspaper, Metropolis, and Next American City.
5. Generate several reports from Quickbooks, start analyzing our 3rd quarter financials and preparing a cash flow spreadsheet and updated budget forecast for next week’s Board of Directors’ Finance Committee meeting.
6. Meet a writer for coffee to discuss the possibility of including the Design Trust in their book about community-based graphic design.
8. Head over to MoMA for the opening reception of their new architecture show, “Small Scale, Big Change.”

To answer simply: I’m an optimist. I believe in the power of design to create positive change, improve our quality of life, and influence how we think, feel and act in our communities and cities.

I want to work for the greater good. I don’t want to work on just improving one aspect of our city, I want to be able to affect change for the good of all. And this is in line perfectly with the mission of the Design Trust – we want to create a vibrant, well-designed city for the good of all New Yorkers. And by defining “public space” quite broadly, we are able to work on a wide range of projects and issues– everything from the NYC taxi system to urban agriculture to sustainable park design – and a whole lot in between.

I am particularly proud of the multi-media website we produced for our Made in Midtown project (I managed the design, development & content of the site). The site examines how New York’s fashion industry works today and demonstrates why the Garment District neighborhood – and creative industries in general – should matter to the city. Producing a website that is interactive and multi-media instead of a print publication was a bold step for the Design Trust – and I think it was highly successful.

Well, in terms of public space, I would have to say our DOT commissioner, Janette Sadik-Khan, is probably the most inspiring. What she has done for public space in NYC in the past few years has been phenomenal. From implementing new bike lanes to converting significant road space into pedestrian plazas to closing off a part of Times Square to cars, she really has had an enormous, positive influence on the public realm.

She is also the source of my favorite quote about public space: “Public space is the glue that holds our city together…and makes it worth living in.” We at the Design Trust are trying to do just that – make our city worth living in.

Walking the streets and just drinking in the sights, sounds, smells and tastes of the city. I love that sense of surprise and discovery you get when you live in a city like New York where the built environment and the people are so rich and diverse. Here you can discover something new – a new building, a new pocket park, a new café, a new view – every single day, and all your senses are invigorated by simply walking around.

There are so many, I could go on and on! Here’s who comes to mind immediately:

1. Jane Jacobs
2. Janette Sadik-Khan, the commissioner of the NYC DOT (see above)
3. Enrique Peñalosa, the former mayor of Bogota, has done phenomenal things for his city
4. Rural Studio / Samuel Mockbee
5. Clay Shirky and Adam Greenfield are both brilliant thinkers about how cities can better utilize technology
6. Fritz Haeg / Edible Estates
7. Public knitting artists like “Knitta Please!” for her small-scale interventions in the public realm
8. Improv Everywhere does fantastic urban interventions that are can be delightful, thought-provoking and hilarious all at the same time
9. Paola Antonelli, the design curator at MoMA, is pushing the boundaries of what is art & design
10. Maira Kalman, for her humorous and delightful interpretations of city life
11. Social innovators/entrepreneurs, like the founders of 3rd ward, an artist community center in Brooklyn; Feast; and Kickstarter
12. Rick Lowe / Project Row Houses
13. Lewis Hyde / “The Gift”
14. As a visual person, I am an ardent fan of graphic design that does good & looks good, like: – Candy Chang, does amazing design projects for cities and communities – the Columbia Spatial Information Design Lab is brilliant at making complex data into beautiful visualizations, like their “Million Dollar Blocks” project – Michael Bierut / Pentagram – Fred Dust / Ideo – Stefan Sagmeister – Bruce Mau for his “Incomplete Manifesto”
15. My fellow Vanguard members are all inspiring, amazing people that I feel blessed to know
16. And it shouldn’t go unmentioned that all the contributors and writers for Next American City magazine! It’s the best writing out there about cities, urban planning and policy, etc.

I think the biggest challenge we face is two-fold. First, we need to demonstrate and educate everyone about why public space matters, and we need to effectively communicate how the Design Trust works and why our work is so important.

We can’t continue to influence how New York City is designed, built and managed unless funders, policy-makers and the general populace understand what public space is, why it’s so vital, and how the Design Trust is working to shape the city for the greater good of all New Yorkers.

I would like to be able to say that I have worked to both positively impact the life of my city as well as the lives of artists in the city. I believe that a robust, creative community is what makes our cities rich, dynamic places worth living in. And right now, I think New York is doing a terrible job of keeping and supporting working artists in the city. It is not a new problem that we have, but it is one that needs some fresh thinking in order to solve it. And I hope that in 10 years I have played a vital role in developing and implementing some solutions that will positively impact the creative community & the city.

To stop thinking about “some day I will….” and start doing something now, whether it’s getting a bike rack for your street or advocating for public drinking fountains or planting trees or getting involved with an organization you believe in. As daunting as it may seem, I truly do believe that you can effect change without a big institution or huge financial resources. If you have passion and vision, act on it. Our cities, our communities, our neighborhoods need you. And by taking action, you will inspire others in your community to do the same.

I would like to live in a city that puts the greater good before individual interests. This would be a city that considers factors like the environmental quality, livability, sustainability, accessibility, and diversity of the city & its people before private interests, money or power. The next American city must be led by someone with vision, who will tackle tough problems not for short-term gain but for the long-term good of their city and its citizens. And it must be a city that values everyone –young/old, rich/poor, artists/bankers, community activists/corporate leaders – and empowers them to participate in making their city the best place it can be.