Measuring Childhood Inequity and Opportunity in U.S. Cities – Next City 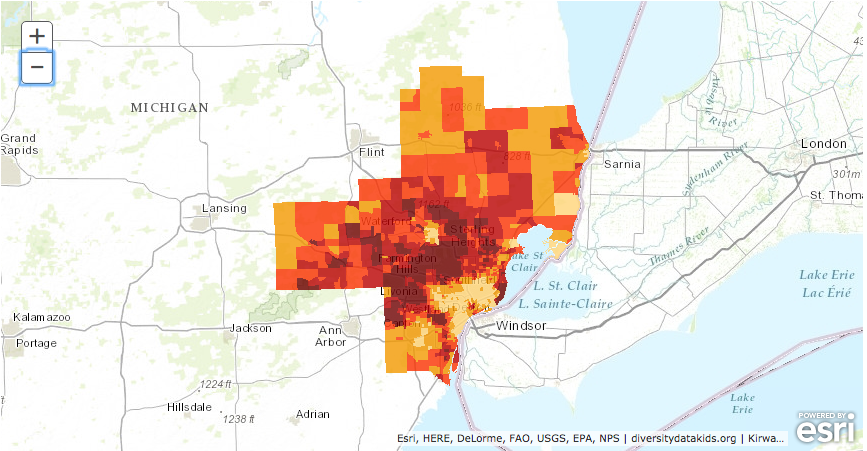 For decades, demographers have been predicting that around 2050, whites will no longer make up the majority share of the U.S. population. Children under the age of 6 are already there: More than half are black, Asian, Latino, Native American, Pacific Islander or some combination. By 2020, the majority of all U.S. children won’t be white.

But shifting demographics have not been matched with equal opportunity, often leaving children of color disadvantaged compared to their white peers — living in neighborhoods with higher rates of poverty, attending more segregated schools, even when their families have similar incomes. A comprehensive new tool by diversitydatakids.org compiles a staggering array of data about children’s neighborhood environments, much of it broken out by race or ethnicity and socioeconomic status. Ample research has shown that a child’s neighborhood environment bears heavily on well-being and life chances, even after they move elsewhere. The tool allows users to compare how states, counties, metro areas, large cities and large school districts rank in terms of childhood inequity. It even includes neighborhood-level “childhood opportunity” maps of the country’s 100 largest cities. 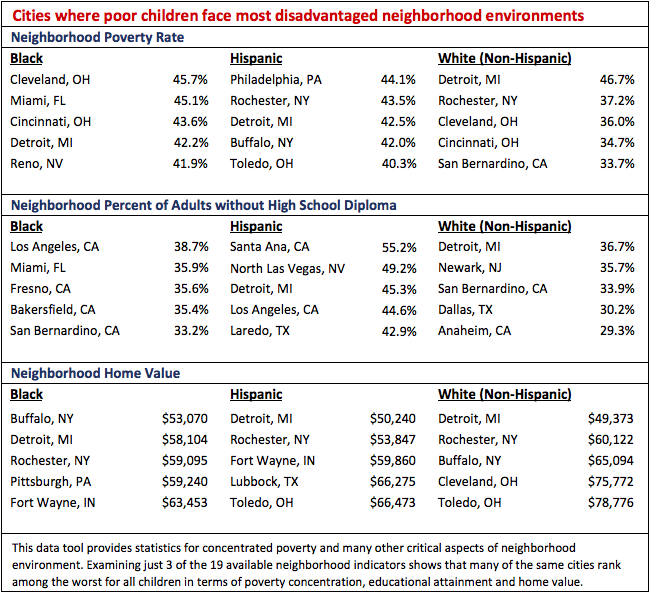 Such racial divides are everywhere evident across over 19 different indicators of neighborhood environment, and over 200 other indicators compiled as part of the diversitydatakids.org database, which is a research project based at the Heller School for Social Policy and Management at Brandeis University near Boston.

With the tool, users can see a city’s population under the age of 18 broken out by race or ethnicity, the changes in that population between 2000 and 2010, the share of children living in high-poverty neighborhoods, the composition of public school enrollment, exposure to other children in poverty, and several measures of school and neighborhood segregation. For some stats, data is also available specifically for young children, under the age of 6. In addition to profiles of individual cities, the tool allows users to rank geographic areas to see how they compare.

The city with the highest level of residential segregation among Hispanic children is Oakland. For black children, it’s Chicago, and for Asian/Pacific Islander children, Detroit. (Not enough data is available on Native American or Alaskan Native children on this stat.) Levels of school segregation — which, like residential segregation, is measured by the evenness with which children from different racial or ethnic groups are spread across a geographic area — are highest for black and Asian children in Newark, and for Hispanic children in Oakland.

The tool can also be used to create maps that compare indicators across states. And the “Childhood Opportunity” feature zeroes in on individual cities to map childhood opportunity — measured by an index that takes into account educational access, healthcare access, and social and economic opportunities — on a neighborhood level.