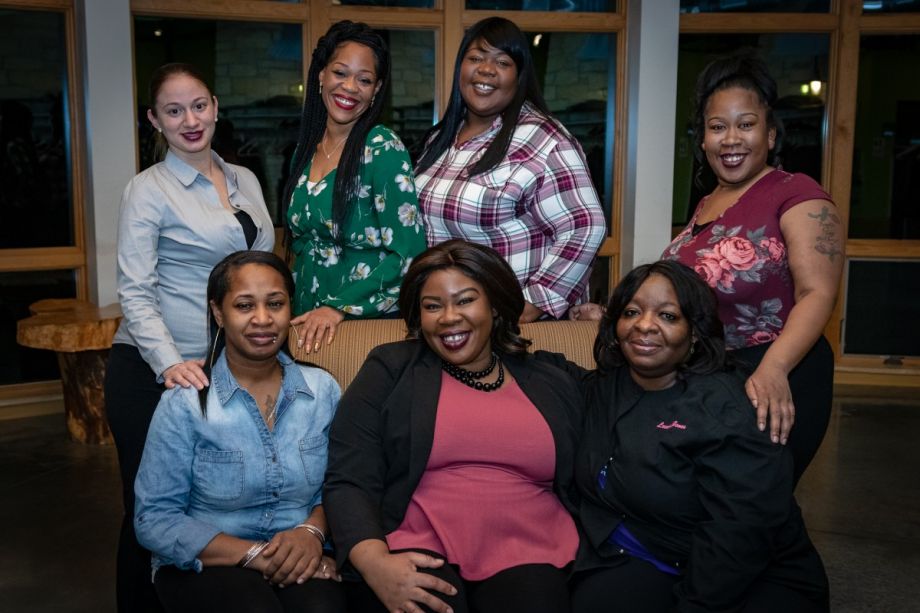 Soaring Independent is poised to launch as a worker-owned home healthcare co-op, but getting there has taken some work. (Photo courtesy of Georgia Allen, pictured center front)

Georgia Allen was fed up. After climbing the ladder in the home healthcare business, Allen and her colleagues decided they had had enough of low wages, high turnover and low-quality care. They thought they could do better as a co-op, but getting started was a challenge.

“I spent so many months at the South Madison Library trying to figure out the operating agreement, and learning how to write a business plan where it would incorporate the worker-owner model,” says Georgia Allen, founder and CEO of the Soaring Independent co-operative. Soaring Independent offers home care services to elderly people or individuals with mobility issues. Allen and a group of colleagues had started thinking about creating a business because they were fed up with low wages, high turnover and low-quality care.

“We knew about the worker-owned concept, and that’s what we wanted because we knew that that would contribute to everybody wanting to actually work if they knew that … if we’re profitable and we do really well, it’s not going to go to investors to buy second vacation homes,” Allen explains.

A librarian suggested that Allen speak with someone about Madison’s co-operative development initiative, Madison Cooperative Development Coalition. The city’s Common Council voted to create the coalition in 2014, funding it with $1 million a year for five years, at the time the largest allocation by a U.S. municipality. (That amount was reduced in 2016 to $3 million.)

The coalition aims to help create local businesses and to reduce some of the area’s stark racial disparities by prioritizing co-op development in communities of color, providing mini-grants, access to funding and technical assistance.

At the time, Mayor Paul Soglin told Grassroots Economic Organizing, “We know that worker-owned businesses are more likely to provide living wage jobs and profit sharing to their members, and are less likely to leave the community they are in.” Allen and her colleagues saw that instead of re-inventing the wheel, they could take advantage of an existing co-operative model and obtain support to launch Soaring Independent.

Even before the launch of the city’s co-operative development initiative, Madison has long been a hotbed for co-operatives. The city boasts more than 70 such businesses, like Union Cab and Isthmus Engineering & Manufacturing, as well as credit unions and consumer co-ops.

Allen has a background working in healthcare finance. She says that forming a co-op and banding together with other similar direct-care co-ops could offer a path forward.

“The direct-care workforce is in a crisis. The industry relying on Medicaid and Medicare assistance, and the reimbursement rates are horrible, it becomes difficult for everyone to retain staff and pay wages that should be paid. No one can afford the cost of this [care],” she says. In this context, she says, big corporate providers have the advantage of scale – and of being able to access private insurance. By forming co-op collectives, Allen theorizes, co-ops like Soaring Independent may be able to negotiate better reimbursement rates with insurance companies.

Since launching in 2015, the co-op initiative has been ironing out its systems and organization. Charity Schmidt came on as the first full-time staff person with the Madison co-operative Development Coalition last August.

“Things are finally moving along, and we’re seeing some impact, and it’s getting pretty exciting, I think,” Schmidt told Next City. The initiative’s first co-operative business, a financial services firm called Common Good Bookkeeping, opened its doors in the spring of 2018. Soaring Independent is one of two additional co-ops poised to launch. Schmidt says a few more groups are also in the process of organizing new co-operative businesses, including one focused on providing racial equity assessments and input.

Still, Schmidt acknowledges that the coalition was slow off the starting blocks. “We were off to really kind of a rough start trying to get the word out to the neighborhoods and communities of color and low-income communities that this initiative was designed to serve. It really took some time to do that outreach and to build relationships with the community organizations so that they are also promoting the initiative,” she says.

Madison’s co-op initiative is an attempt to transform this situation, but Schmidt and Allen both acknowledge that there are stumbling blocks.

“Free resources are only going to get you to a certain limit, and we passed that months ago,” Allen says, describing how Soaring Independent is thirsting for an injection of capital to spur its growth. Allen acknowledges that because much of Madison’s African-American community is low-wealth, its members look like credit risks to bankers. This, she says, has slowed Soaring Independent’s ability to launch. Nonetheless, Allen says that communities of color have valuable input to offer the co-op initiative to learn how to work around hurdles like having few assets or a low credit score. “I think that with the right systems and working collaboratively to identify what those [systems] look like, [the initiative] can be successful,” she says.

For Schmidt, one challenge has been that the coalition’s leaders are ethnically homogenous.

“It’s still white people holding the purse strings,” she says, noting that the coalition offers small grants to support initial organizing efforts. The coalition has partnered with lenders to help the co-ops obtain the financing needed to launch.

Quesada Centeno, however, shares some of Allen’s concerns. “In Madison, most of the co-ops are owned or led by people who are not people of color. The ecosystem doesn’t necessarily understand some of the needs that people coming from different backgrounds have,” she says. As examples, Quesada Centeno points to the lack of co-op development materials in Spanish and challenges members of the low-wealth community face when they try to access funds from traditional lenders.

“It’s a learning curve for everybody,” Allen says, who adds that her experience on the business side of healthcare means she can offer important perspectives to Soaring Independent’s members and to the co-op development coalition. “We are the only African-Americans. It’s new. Everybody is learning how to work together.”