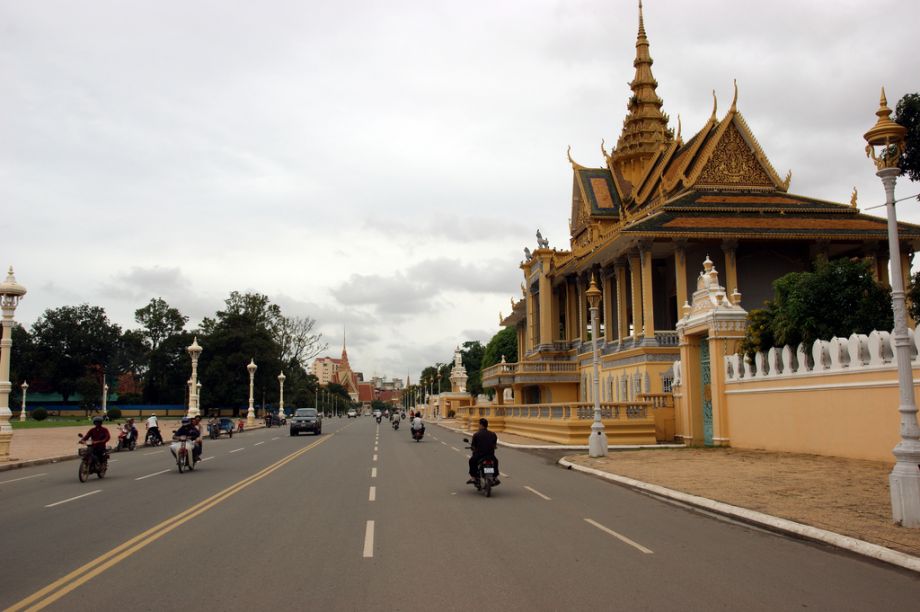 Many roads in Cambodia have been upgraded thanks to JICA’s assistance. Photo credit: Allie Caulfield via Flickr

In Phnom Penh these days, cranes outnumber temple spires. Along with new apartment and office buildings, the city is in the thralls of a public-works construction boom. Rusted ferries are being replaced with modern bridges, the narrow, pothole-plagued highways that link the capital with Ho Chi Minh City and Bangkok are being revamped, the city’s drainage system is being overhauled, the water supply is being extended to the furthest corners of the mushrooming metropolis, and a new fleet of public buses have taken to the motorbike-swarmed streets.

But Cambodia’s famously kleptocratic government isn’t really leading the infrastructure charge. Rather, behind many of these projects stands the government of Japan, which is quietly reshaping rapidly urbanizing cities in Cambodia and across the developing world through the Japan International Cooperation Agency (JICA), that country’s answer to USAID.

JICA’s reach is enormous, and its impact on Southeast Asia is being felt far and wide. It’s JICA that’s upgrading bridges in Manila and introducing solar electricity in the Laotian capital of Vientiane. JICA is the driving force behind the expansion of Jakarta’s mass transit and flood control systems. The urban railroads and airports that are being renovated across Vietnam are the work of the Japanese agency, as is the rehabilitation, after decades of neglect, of the railways and ports in the city of Yangon, Myanmar’s commercial capital.

In the 1990s, Japan was the single biggest distributor of official development assistance (ODA), and though it’s since been surpassed by Germany, the UK and the US, it’s ramping up its efforts once again. In 2013, Japan increased ODA spending by nearly 37 percent, to $11.8 billion. Transportation infrastructure receives most of that – JICA dished out more than $5 billion in loans for such projects in 2012. According to the agency, it has assisted in the upgrading of airports in more than 26 countries, and helped improve subways and urban railways in 18 cities worldwide. Public works and utilities, such as improving Phnom Penh’s leaky drainage system, is also a major focus for JICA. Such projects received almost $315 million in technical cooperation in 2012, and nearly $780 million in grant aid – money that does not have to be repaid. JICA has also drafted master plans for cities across the region.

Southeast Asia is by far the largest recipient of JICA’s aid, accounting for $5.7 billion USD in projects and some 43.5 percent of all Japanese ODA loans in 2012. All the largesse has historical roots – the 40-year-old agency models its activity on Japan’s post-World War 2 experience, when international institutions such as the World Bank helped the defeated island nation rebuild its shattered cities and economy by financing large infrastructural projects, such as highways, power stations and the country’s famous Shinkansen high-speed train line. This development aid, the theory goes, was a major factor in the incredible economic growth that made Japan a superpower in the second half of the 20th century.

It also explains why Japan is so generous with its neighboring countries. JICA’s work may happen outside Japan’s borders, but it’s very much in Japan’s interest. Infrastructure projects funded by grant aid don’t require the same bidding process as those funded with loan aid, allowing JICA to hire Japanese contractors to build the projects it approves. And the emphasis on roads, railways, seaports and airports ultimately creates conduits for quicker trade and the transport of raw materials to resource-poor Japan. Meanwhile, improving utilities makes it easier for Japanese companies to operate in those countries. Long gone are the days when it was in a country’s best interest for its neighbors to be stable but weak – a strong Southeast Asia benefits Japan.

JICA’s stated mission is to promote “economic and social development” and “international cooperation” through technical sharing, low-interest loans and grant aid. But according to Toshiyuki Doi, a Bangkok-based senior advisor with Mekong Watch, an NGO that monitors Japanese-funded development projects in Southeast Asia, JICA otherwise does not have “a clear ideology or principle.”

“JICA is really understaffed,” Mr. Doi says. “But they have to dish out their entire annual budget. Otherwise, from the following year, their budget will be cut… So, naturally, they tend to give money to big projects.”

Nowhere, moreover, is the economic incentive to provide aid as evident as it is in JICA’s involvement in the creation of Special Economic Zones (SEZs) in Southeast Asian cities. Such industrial free-trade areas lie adjacent to Cambodian ports in Phnom Penh and the coastal city of Sihanoukville, while another is being constructed next to Myanmar’s Thilawa deep-sea port, some 25 kilometers south of Yangon.

The latter SEZ is turning into something of a flashpoint for JICA, with farmers being evicted from their land to make way for the 6,000-acre industrial complex. JICA has a 10 percent stake in the project (about $5 million) while Japanese corporate titans Mitsubishi, Sumitomo and Marubeni control an additional 39 percent (the Burmese government and several local companies own the remaining 51 percent share). So far, more than 80 households – about 300 people – have been forced to move from the area since construction began in November. Many complain that the compensation they’ve received has been grossly inadequate. Local leaders have petitioned JICA for better packages, but JICA so far has availed responsibility for their plight on the Myanmar government. An additional 4,500 people will need to be resettled before the project is completed.

In the face of this criticism, JICA has claimed that the SEZ will create hundreds of thousands of jobs, first in construction, then in manufacturing – mostly, of course, for Japanese firms. In the meantime, though, what are the displaced farmers to do?

“According to JICA’s principles, resettled families have to be paid compensation so that their living standard is at least as good as it was in the pre-project stage,” Mr. Doi says. Mekong Watch is closely monitoring this issue, which you can read more about here.

JICA has also been criticized for its plans to build more SEZs across Myanmar. And this isn’t the first time that a JICA-funded project has led to evictions and inadequate compensation. JICA officials declined to comment for this article.

JICA, however, doesn’t hide the fact that Japanese business interests can be a driving force behind their activities. In the face of a faltering domestic economy, intense competition for resources with China and increased resistance to foreign aid projects at home, JICA’s 2013 annual report clearly states that the agency is “using ODA to support the entry of private-sector companies in developing countries,” and that “by improving the flow of goods and securing routes for natural resources, JICA will establish an environment that is beneficial for Japanese companies.”

Whereas USAID and international bodies such as the IMF often impose political or economic conditions on their ODA (in the case of USAID, aid is also used to mask CIA activities) JICA appears to hand out aid without caveats — with one leviathan exception. If you look at the International Whaling Commission (IWC), the international body that is supposed to regulate commercial whaling, the organization’s only Southeast Asian members are Cambodia and, bizarrely, landlocked Laos. Joining the IWC in 2006 and 2007 respectively at Japan’s insistence, both countries, which receive a considerable amount of support from JICA, routinely side with the IWC’s pro-whaling nations. Same with landlocked Mali and Mongolia, also recipients of JICA aid. Some pro-whaling IWC members have even allegedly been bribed with Japanese holidays and “good girls.” Japan, of course, denies such allegations while alleging, with a fair amount of credibility, that some anti-whaling countries have been similarly wooed by other governments and NGOs.

These criticisms aside, however, the JICA model is setting a tantalizing standard for countries that want to bolster their own economies by helping other, less-prosperous nations around them. By financing much-needed projects that developing cities would otherwise be unable to afford, it appears that Japan, under the banner of altruism, is cementing its status as a major force in Southeast Asia – and spearheading a win-win approach to aid and urban development.